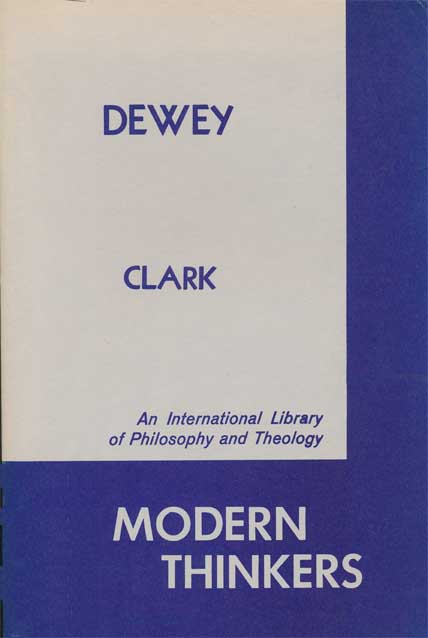 Most books on John Dewey focus on his views on education. Gordon Clark however critiques Dewey’s underlying philosophy. The work is technical and difficult to follow in places. It might even be one of the less important of Clark’s books to read. But it a relatively short read—even the 2nd edition of the work combined with Clark’s William James, is less than 150 pages—and contains much of value as an example of Clark critiquing a secular philosophy. [Page references in this summary review will be from this 2nd edition, printed as William James and John Dewey (Trinity Foundation, 1995).]

By the scientific method Dewey “hoped to solve the pressing problems of ethics, politics, and sociology.” (p. 51) Dewey views there to be an inconsistency in that we live and make progress via science but hold on to ethical ideas from non-empirical philosophies (and religions). He desires to “unify man’s divided views of value and nature” in having experimental science take over to integrate a wider field of knowledge. Dewey held to the theory of operationalism. For Dewey it is through operationally-understood science that value can be saved. That is, the modern scientific theory is said to eliminate values in making them exist only in the mind and not in the real world. Through operationalism Dewey intends to give ideas an empirical origin. An avid reader of Gordon Clark will easily see where this is going—empiricism cannot justify any value at all since it cannot surmount the is-ought problem. That is, from descriptive premises one can never form normative conclusions.

In a chapter on Ethics, Clark asks, “How can science determine in the concrete what is ideal and what is not?” (p. 61) “If humanism cannot rationally justify one ideal as against another, if its theory of ethics cannot give clear-cut guidance in the perplexities of life, it will have failed in its main endeavor and must be abandoned.” For Dewey moral standards are the result of custom. Clark notes that this makes even the cannibalism of the pacific islanders a moral standard in its own place.

Advocating the scientific method, Dewey believes it can even determine values. For Dewey all values are instrumental, nothing is valuable in itself. (p. 67-68) “But if, as Dewey says, there is no final cause and if everything is chosen merely as an ends to something else and never because of its intrinsic qualities, does it make any difference what we choose?” (p. 69)

Perhaps my favorite quote in the whole book then is:

Dewey believes that the desire for certainty should be abandoned, replaced by the security modern science provides. (p. 71) “All the laws of science are essentially plans of action, plans for controlling nature, plans for securing the future.” (p. 72) “Dewey asserts that modern scientific method can solve the problem of ethics. But is this problem the problem of security? Is it not rather the choice of what to secure?” (p. 72) “Must there not be a value, a good, an end whose intrinsic goodness can motivate a choice before our knowledge of means, conditions, and circumstances will lead us to secure it? Can science possibly justify ideals?” (p. 76) “If the empirical methods of the laboratory cannot justify any ideal, the very basis of Dewey’s philosophy collapses.” (p. 78)

“Instead of a divine sanction of morality, there is a social sanction. … Dewey envisages a still greater social compulsion in the future than in the past. Science will devise procedures to control the desires of men.” (p. 80-81) “Dewey wants to manipulate men as completely as science manipulates physical nature.” (p. 81) “His social theory of ethics cannot logically stop short of totalitarianism.” (p. 82) “Although this totalitarianism seems to be logically implied by Dewy’s theory with his condemnation of individualism and his hope of brainwashing the population, yet this is not what Dewey said nor probably what he consciously meant. In one of his books Dewey asserts that no honest person can convince himself that murder would have beneficial consequences, and he also adds that a normal person will immediately resent an act of wanton cruelty.” (p. 83) “Philosophically, this begs the question.” “The plausibility that a normal person resents wanton cruelty and condemns murder lies in the fact that the statement is true in the United States, at the present time, because of our Christian heritage. But it is not true in Communistic countries. There murder and massacre are definitely accepted as having very beneficial consequences.” (p. 84) “He assumes a universal moral agreement where little or none exists.” (p. 84) “He has nowhere produced scientific evidence that murder never has beneficial results. Nor can his own principles consist with such a fixed moral norm as this would be, if it could be proved. Dewey’s insistence on the tentativeness of all practical hypotheses requires him to admit that wanton cruelty may some day be the most efficient means to a social goal.” (p. 84-85) “What theory justifies the supremacy of the State as judge of right and wrong?” (p. 85) “There is another puzzle left by Dewey’s theory … How are the rulers to decide what policy to follow?” (p. 85)

“Indeed, for all his insistence that science can solve all problems and that values can only arise through relating means to proximate ends, Dewey, so far as I know, has not given a single instance of thus discovering a value. He seems to admit as much (The Philosophy of John Dewey, 529, note). But is it unreasonable to ask for just one instance?” (p. 86) “The disparity between normative principles and descriptive statements is one of the basic objections to naturalism.” (p. 87)

“Christianity with its revelational basis asserts that suicide is immoral; but what can be said by an empirical, descriptive philosophy? (p. 88) “The great majority of modern moralists refuse to face this problem.” (p. 88) “Both with Dewey and with the others, the usual line of argument proceeds from the false assumption that there is general agreement on moral principles among fair-minded people.” (p. 89) “Schopenhauer, Dewey, and Nietzsche all looked (supposedly) at the same world; but clearly they did not see the same thing.” (p. 90) “Hence, a first conclusion is inescapable. Those moralists who have proceeded as if all men agree on what is desirable must be judged to have failed.” (p. 90) Clark’s second conclusion is that science cannot justify any ideal.

Given the failure of Dewey’s theory and other secular theories like it, “it seems to follow that a more sympathetic consideration ought to be given to divine revelation than is customary in the universities of our land.” (p. 92) This follows Clark’s procedure in other places like A Christian View of Men and Things and Thales to Dewey where he critiques various theories in order to more easily allow consideration of Christianity.

In a final chapter on “formal logic,” Clark has a section on “existential import.” [This is the first of a number of instances in Clark’s writings where he speaks on this subject.] Dewey uses the advent of Boolean logic as an example of improvement over Aristotelian logic. Clark notes, “If, however, this proves not to be the case, a major piece of evidence will drop out of Dewey’s position.” (p. 122) “Dewey himself does not give much argument in favor of existential import. He takes it for granted.” Clark notes his own university professor Henry B. Smith of the University of Pennsylvania as one “who detected the inconclusiveness of the modern argument and worked out symbolically the justification for subalternation.” (p. 125) “Smith pointed out that the entire case for non-Aristotelian logic rests upon the choice of a definition. It was assumed that ‘All a is b’ means ‘a is included in b.’ This assumption is unnecessary.” Working out a contradiction in the modern view, Clark concludes “The Aristotelian scheme is clearly superior.” (p. 126)

Clark again concludes with an appeal to the Christian view, “If thought has meaning, then there are eternal truths; and while a monograph on Dewey is not the place to expound it, eternal truths require an Eternal Mind whose thinking makes them so.” (p. 129)

One letter relevant to this book came to Clark from Arthur E. Murphy, a philosophy professor at the University of Texas. 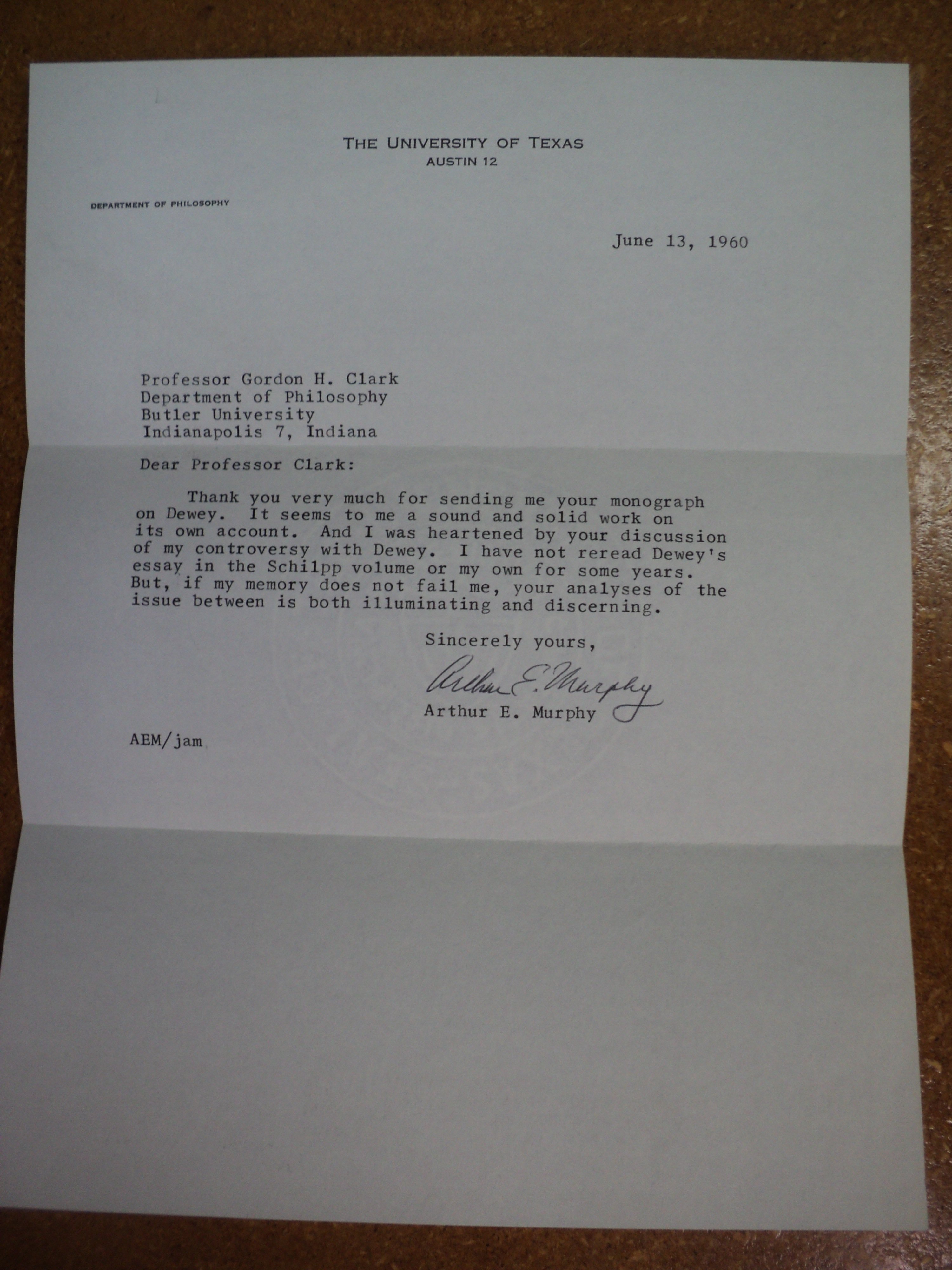