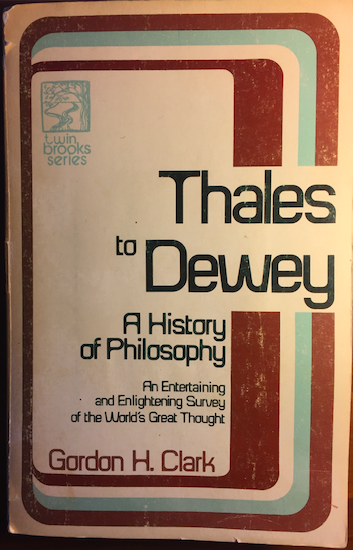 Thales to Dewey, A History of Philosophy, An Entertaining and Enlightening Survey of the Word’s Great Thought, by Gordon H. Clark, Boston: Houghton Mifflin, 1957, 548 pp.

Why, after writing two books on Christian philosophy, did Gordon Clark go back to writing on philosophy more generally? Possibly he was just interested in having a book to use for his own university courses. Or perhaps he wanted to complete a full history of philosophy of his own, having been merely one of four contributors to the earlier A History of Philosophy. Ultimately though, this book seems to be designed to fulfill part of the goal which Clark initially set out in A Christian View of Men and Things; that of constructing a Christian philosophy. While Thales to Dewey is not itself a book on Christian philosophy, it is vital to Clark’s overall approach to defending the faith. That is, showing here the general failure of secular philosophy to obtain any knowledge (i.e. skepticism) the student is then perhaps more willing to consider the Christian alternative. In fact, Clark concludes Thales to Dewey with a rhetorical question leading the student to just that consideration: “Could it be that a choice must be made between skeptical futility and a word from God?” (p. 534)

This question, rhetorical still, is answered in a number places throughout the volume. For instance, Clark writes, “The genius of the Reformation was to avoid the skepticism that results from dependence on unaided reason and to accept truth as a revelation from God; whereas the philosophical development is an attempt to show that knowledge is possible without recourse to any special or supernatural revelation.” (p. 302)

Thales to Dewey is a dense book, covering most of history’s major philosophers. A summary of it in a review is near impossible. While Thales to Dewey is a history of philosophy, its emphasis is epistemology. In fact, Clark notes in the preface “it might be said that the present work is predominantly concerned with questions relating to the problem of knowledge.” (p. vi) Particularly important sections on epistemology are those on Plato, Augustine, and Aquinas.

This book was probably Clark’s biggest seller, for it was assigned for courses at a number of colleges. It is also one of the more important in the corpus of Clark’s writings. If you even can follow half of the technical details of the philosophers under discussion you’ll have gained immensely from this study.

The cover picture above is of my own copy of the book. The original however looked like this: 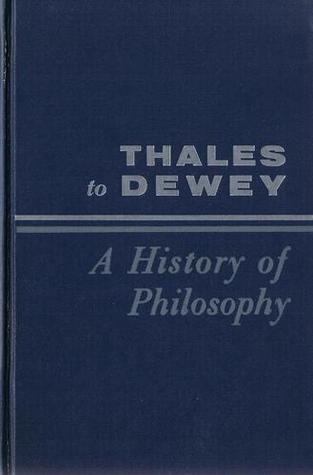