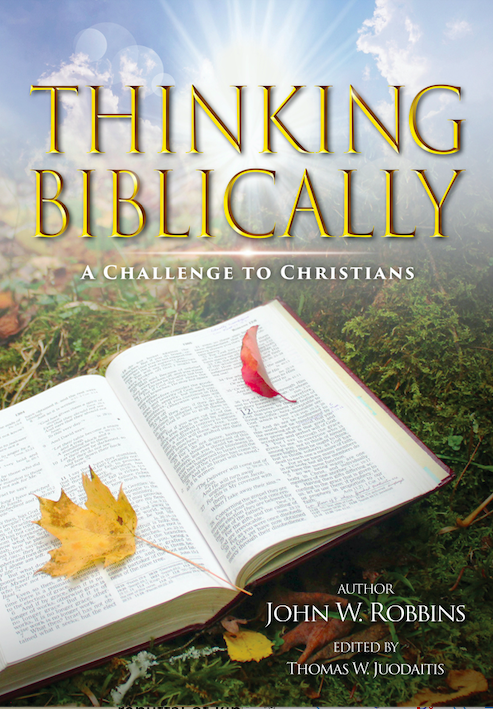 I started reading books from the Trinity Foundation in the year 2008. I later found this was the same year the foundation’s founder John Robbins passed away. This posthumously edited volume Thinking Biblically now arriving feels like a “Robbins Speaks from the Grave.” It was quite a joy to receive it in the mail and brings me to envy those who were blessed to read Robbins and Clark books as they came out. This is perhaps my only such opportunity.

As much as I was excited to receive the volume, my reaction now having read it is mixed. While I agree with most of Robbins’ theological statements in the book, it contains few if any ideas which haven’t been presented in other Robbins or Clark volumes. Still there is value in the book putting together in one place much about the presuppositions and method of proper Biblical thinking. I would even recommend this to be read first of all Robbins’ books.

As the foreword to Thinking Biblically informs us, “The contents of this book were first delivered as lectures at the Westminster Institute in June and July 2000, and a few months later at Midway Presbyterian Church.” Whether Dr. Robbins ever intended for the lectures to be published I do not know, but it does explain the feel of the book as something less polished than his other writings. That is not all a bad thing. While there are negatives like some repetition in material from lecture to lecture, the question and answer periods at the end of the lectures give excellent feedback and further thought on the subjects at hand.

There is one specific criticism I’d like to note. While Robbins well-defines thinking as “to make judgments, to reason, to subject to the processes of logical thought” (p. 26), I must question his statement that “Babies are not capable of thinking as we have defined it.” (p. 58) I would expect such a view from a Baptist who holds to an “age of accountability” or from an empiricist who finds no evidence for the case. But, for a Scripturalist like Robbins, Biblical proof is needed. Where in the Bible do we find that babies do not think? Robbins provides no such reference. Does not Robbins own critique of the empirical “blank mind” as “no mind at all” also apply to the unthinking infant? And how does an unthinking person (if such did exist) possibly become a thinking person? Ultimately, if the image of God includes reason, is Robbins’ non-reasoning infant not (yet) made in the image of God?

7 thoughts on “Review of Thinking Biblically by John W. Robbins”