I really look forward each year to seeing all the “Fathers and Brothers” at the Bible Presbyterian Church General Synod. This year was our 85th General Synod and it took place in Grand Island, NY. The food and the company did not disappoint. My family came along for the week and we especially enjoyed time with the Andy Yong family.

On the day prior to the start of Synod we had our yearly meeting for the Presbyterian Missionary Union (PMU) under which I do my mission work with Sola – Appalachian Christian Retreat. A good development there is that we’ve been approved to use some missions funds each summer to hire an intern. This will help relieve some of the great quantity of work set out before us. I’ll most likely be looking for a seminarian each year to fill this role. More details will shortly be forthcoming.

The most substantial work at the Synod was likely the approval of a recommendation of the Declaratory Statement Study Committee that “the Declaratory Statement not be printed in future publications of the Constitution of the Bible Presbyterian Church, be it in print or any other media including the denominational website.” The vote was nearly unanimous with only a few audible nays and without any arguments raised against the recommendation. I believe this is a good move in the Reformed direction. (On that subject, to those unaware of today’s BPC, it should be noted that the BPC repudiated dispensationalism in a Synod resolution in 1996)

For those who don’t know what I’m taking about, I’ve written this brief history of the Declaratory Statement:

I.The History of the Declaratory Statement

The addition of a Declaratory Statement to the PCUSA’s confession in 1903 was only one of a number of changes made to their standards that year. “Through two successive Assemblies certain changes were considered and in 1903 modifications were made by adding a Declaratory Statement as to Chapter II and Chapter X, section 3; and changes were made in Chapters XVI, section 7, XXII, section 3, XXV, section 6, Chapter XXXIV on the Holy Spirit and Chapter XXXV on the Love of God and Missions were added.” (Edwin Rian, The Presbyterian Conflict, 19.)

Various church historians have contended that these changes came about as an effort to decrease perceived Calvinistic harshness in the Confession and so to open up the way for greater ecumenical relations and even mergers with Arminian denominations.

“…in 1903, the Confession was revised in such a way as to tone down the distinctive Calvinism of the Confession, or counterbalance it with the whole counsel of God—depending upon one’s interpretation. … a Declaratory Statement was appended to explain the Church’s disavowal of certain inferences commonly drawn from the Confession. It maintains that God’s eternal decree (III) is held in harmony with His love to all mankind on the one hand and human responsibility on the other; and that the expression ‘elect infants’ (X, iii) is not to be regarded as teaching that any dying in infancy are lost. It is significant that Loetscher considers those changes as bringing the confessional position of the Church into accord with the classic Dutch Arminianism of the seventeenth century. Revision was one helpful step toward reunion with the historically non-Calvinistic Cumberland Presbyterians in 1906 as well as other ecumenical endeavors on the part of the Church, such as the organization of the Federal Council of Churches in 1908 and the unsuccessful plan for ‘an organic union of the evangelical churches of America’ conceived in 1918 and put forward in 1920.” (George P. Hutchinson, The History Behind the Reformed Presbyterian Church Evangelical Synod, 160-161.)

“These revisions were less extensive than those proposed in 1890 yet they meant a victory for the New School party and a definite toning down of the Calvinistic emphasis of the Confession of Faith.” (Edwin Rian, The Presbyterian Conflict, 19.)

But when the Bible Presbyterian Church formed it didn’t fully follow Machen’s direction on the Declaratory Statement. At the First General Synod of the Bible Presbyterian Church on September 7, 1938 a “Committee on the Constitution” was formed to “draft and propose to this Synod an acceptable form of the words to cover the subjects embraced in Chapters XXXIV, and XXXV of the Confession of Faith in the form in which it appeared in the Constitution of the Presbyterian Church in the U.S.A. in the year of our Lord 1936, and the Declaratory Statement appended to the same.” (page 7)

While the minutes don’t clearly state so, presumably the chapters added to the Confession by the PCUSA were removed at this time. On the second day of the synod a motion was adopted to append a Declaratory Statement to the Confession. This statement was modified from the 1903 PCUSA as shown in the following table: 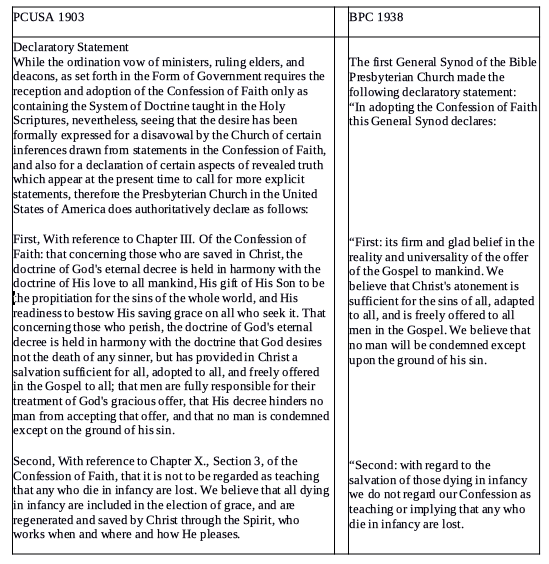 As I stated before, the Declaratory Statement will no longer be printed with the BPC Constitution. As Monty Python said, “And there was much rejoicing.”