Today’s Unionville, NY had other names in its early years. According to the histories, it was once known as “Tucker’s Store” since an early resident, Henry Tucker, operated a store out of his house here. Then the general area was referred to as “Westown” (with one “t”) or “Westtown” (with two “t’s”) being as it is West of the Drowned Lands. At least one history says Unionville was known as “Upper Westtown” but I have not found any maps with that name shown, nor any newspapers using the term. A hamlet to the north of Unionville would in time take the name “Westtown” but early maps put that name near the NY-NJ border on the sight of the present Unionville.

In the 18th and early 19th centuries this area was made reference to only under the broader region of “Minisink.” The earliest reference I’ve found to “Westown” is from an advertisement of a farm for sale on January 1, 1811 “Lying on the main road from Deckertown and Westown.”  Then June 1st, 1812 the “Goshen and West Town Turnpike Company” was established. And the “Westown Meeting House” (today’s Westtown Evangelical Presbyterian Church) is mentioned in the January 11, 1814 “Orange County Patriot.”

The earliest map I’ve found that puts any settlement here (beyond just single houses) is the 1818 Map of New York by John Eddy. Here Unionville is referred to as “Westown” and the modern “Westtown” isn’t even labeled. 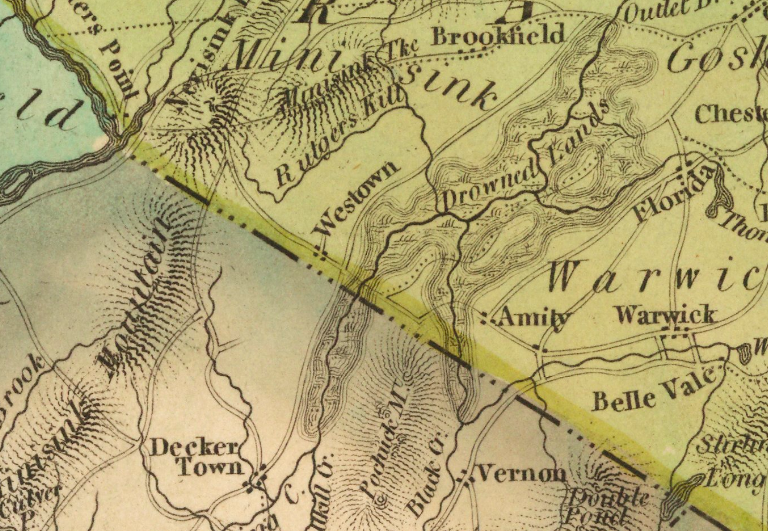 Tanner’s 1819 Map of New York also puts “Westown” here right along the border at today’s Unionville and again shows nothing of today’s Westtown. 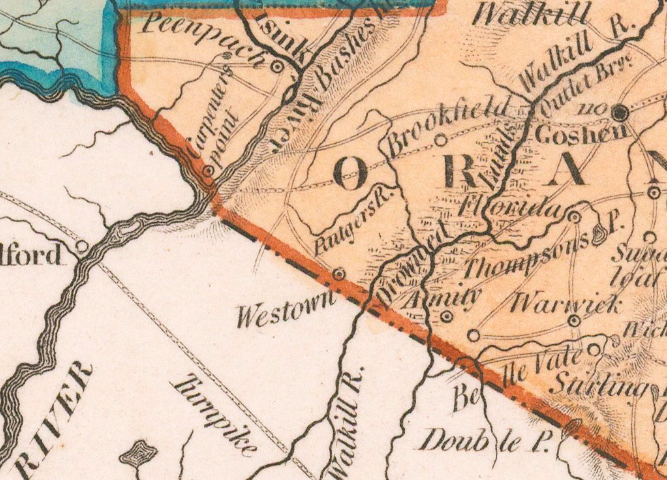 According to Minisink, A Bicentennial History “Citizens of the Upper Westtown area assembled in the common school in 1823 and voted to change the name of their village. Samuel Van Fleet chaired the meeting and Dr. Sylvester Austin acted as the secretary. A resolution was adopted to change the name from Westtown to Unionville.” (p. 227) Then in 1825, the land deed for the soon-to-be-built First Presbyterian Church is the only place I’ve seen the village named with two words separated as “Union Ville.”

Still in 1827 on Finley’s Map of New York is this border town called “Westtown” but with a double “t” for the first time on a map. The mapmaker may not have received word of the 1823 resolution changing the name of the village to Unionville.

The first map I’ve found which actually shows “Unionville” is just the next year with Thomas Gordon’s 1828 Map of New Jersey. This is also the first map to have both “Unionville” and “Westown” shown. 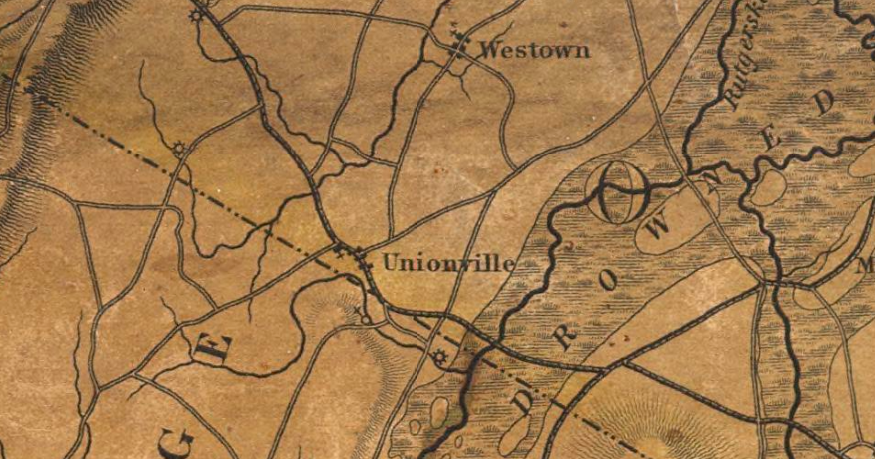 So here is my theory:

The general area was referred to as Westtown for some time. Therefore the church in Westtown was accurately so called even if “Westtown” was also applied to today’s Unionville. The village’s adoption of the name “Unionville” in 1823 occurred just two years before the Unionville church was to be built. Since there already was a Westtown Meeting house, perhaps the locality needed a new name to apply to the church as well as the growing village to help distinguish it as its own place. The church provided a greater identity of place to a village then just numbering perhaps a dozen or so houses and a few businesses.