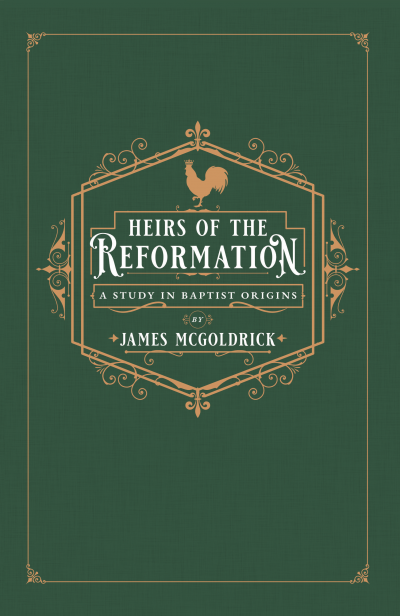 I had been looking for a reasonably priced copy of this book for some years. Before this reprint edition the book was called Baptist Successionism. That version, now twenty-five years old, sells for over $100 online. Now that Dr. McGoldrick (of Greenville Presbyterian Theological Seminary) has had the book reprinted it is far more accessible and only one tenth of the price.

McGoldrick notes that he was “for several years a vigorous advocate” of the views of J. M. Carroll’s The Trail of Blood, perhaps the most well-known book supporting “Landmarkism” or the idea that Baptist churches can directly trace a lineage back to the churches of the New Testament. “Extensive graduate study and independent investigation of church history,” however, convinced McGoldrick “that the view he once held so dear has not been, and cannot be, verified.” (p. 2) Baptists, McGoldrick contends, “arose in the seventeenth century in Holland and England.” “They are Protestants, heirs of the Reformers.” (p. 2)

McGoldrick works one-by-one down the list of proposed Baptist precursors showing that they were anything but. “Montanism appears to have been much more akin to Pentecostalism than to any historic expression of the Baptist faith.”(p. 12) The Novatians “thought of themselves as purely Catholic!” (p. 19) St. Patrick went to Ireland in service of Rome (p. 25) and “did not maintain a baptistic view of the church and sacraments.” (p. 27) The Paulicians were adoptionists, Bogomils dualists, Cathars neo-manichaeans, and the early Waldensians essentially Catholic. The similarities these groups have with the Baptists are seen to be mostly superficial.

Perhaps the most excellent chapter of McGoldrick’s treatise is that on “The Anabaptists, Whose Forefathers?” Here he contends that Anabaptists have more in common with Roman Catholicism than with Protestantism. “When Anabaptist and Baptist beliefs on cardinal doctrines of the Christian faith are compared, it becomes evident that the former, theologically speaking, could not have been the forefather of the latter.” (p. 90) “The early English Baptists disavowed the Anabaptists vehemently.” (p. 103) Among the Anabaptists “affusion was the approved mode of baptism. Immersion was very uncommon.” (p. 115) The Anabaptists of the Reformation era did not regard the mode of baptism as a matter of great importance, but the historic Baptist confessions demand immersion unequivocally.” (p. 115)

A final chapter on “Are Baptists Protestants?” addresses the contention that Baptists never left the Catholic church, for, it is said, they were never in it. The General Baptists movement is traced to Brownist Separatist ministers John Smyth (c. 1565–1612) and Thomas Helwys (c. 1570–c.1615) who left England, settled in Holland, and “came eventually to the conviction that believer’s baptism alone satisfied the New Testament requirements.” (p. 126) “Once they insisted on believer’s baptism as a prerequisite for membership in the church, they had, for all practical purposes, laid the foundation for the Baptist movement of modern times.” (p. 126) “It is clear that neither Smyth nor Helwys believed that an unbroken line of true churches was essential for the maintenance of a proper ministry. These Baptist forefathers would be very uncomfortable among today’s successionists.” (p. 127) Perhaps at some odds with his chapter on the Anabaptists, McGoldrick shows significant Anabaptist influence on these first Baptists, even such that they take up Arminianism. (p. 128-129) While Smith and Helwys were the founders of the General Baptists, “the Particular Baptists appeared in England about 1638 as an outgrowth from Puritanism, with its Calvinistic system of doctrine.” “Records … show clearly that immersion was reintroduced in 1649 after a long period of disuse in England.” (p. 131) “Like … the General Baptists, they [the Particular Baptists] denounced the idea of succession as a doctrine of Antichrist.” (p. 132) Only in 1644 comes the “first official Baptist statement to require immersion.” (p. 133) And this statement “disavowed categorically any connection with the Anabaptists.” (p. 133) “In denying any connection with the Anabaptists, the English Baptists, both General and Particular, affirmed their allegiance to the Protestant Reformation, and in some of their doctrinal announcements they actually called themselves Protestants.” (p. 133)

McGoldrick concludes that “successionism as a scheme for the interpretation of church history is itself a phenomenon on relatively recent origin.” (p. 145) “Landmarkism originated in the nineteenth century, J. R. Graves (1820-93) and J. M. Pendleton (1811-91) being its two most influential early leaders.” (p 147) Only in 1851 was the “first formal statement of Landmarkism.” (p. 147)

3 thoughts on “Review of Heirs of the Reformation by James E. McGoldrick”