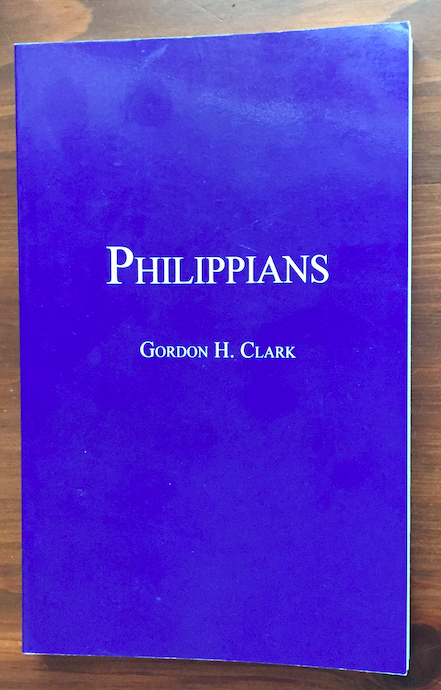 This is the last published commentary of Gordon Clark’s and the last published original material of his as well. John Robbins notes in the introduction that Clark wrote the book “around 1982.” Clark’s correspondence confirms this. In a letter from Clark to Robbins of 9/6/1982, he writes, “Having just finished a commentary on Philippians, I am at a loss to choose another project. Since they have retired me to only one course (3 hrs a week) I have plenty of time.” Over a year later Clark had misgivings about the book. He wrote to Robbins on 11/28/1983, “As the years roll along, faster for me than for you, I would, naturally, like to see as many of my MSS published as possible. One I am not really interested in. Some years ago you encouraged me to write a second edition of my book on Christian Philosophy of Education. You were not able to publish it. It suits me if you throw it in the waste basket. Philippians is also under par. You need not throw it away, but it can decorate a book shelf. The problem, for me, is how can some others be brought out?” But Clark might not have entirely ruled out publishing it, for he wrote to Robbins again on 1/11/1985 saying, You may return Philippians. Whether I revise it or not depends on my schedule. I am spending all my time on The Incarnation now.”

So maybe the volume we have is the “sub-par” draft, or a later revised one.

In Clark’s preface he notes his view of Bible translations:

“If an impatient reader cannot wait to determine the present author’s evaluation of the versions, let it be said that the American Revised Version of 1901 or its later New American Standard edition is the most accurate of all. The King James is second in accuracy and first in style. The advertising campaigns of modern versions have unfairly maligned it. The Revised Standard Version makes some deliberate mistakes, more frequent in the Old Testament than in the New. The New International Version is too much of a paraphrase, but of course much better than the travesty of Good News for Modern Man. This should be sufficient to satisfy initial curiosity.” (p. viii)

Clark writes more about the perseverance of the saints here than anywhere else in his writings. (p. 8 -16) He notes that “the doctrine of perseverance fits in with all the other doctrines.” (p. 16)

The bulk of the commentary discusses grammatical and textual issues, with Clark working through the views of various commentators before providing his own. This, frankly, is not the most interesting approach.

On pages 32-33 Clark has an interesting story about a time he participated in a debate at Gordon Seminary. I’m unaware of this event from all other sources. He says it happened before the merger with Conwell Seminary. That was 1969. So his visit was sometime prior to that.

On page 41 Clark mentions Augustus Toplady, whose theology (and hymn Rock of Ages) he praises in a number of his books. Here he does the same, but notes “I do not agree with his Lockean philosophy.”

On pages 61-62 he critiques the Lutheran idea of the communicatio idiomatum.

Pages 63-66 have comments on the incarnation which foreshadow—but do not yet agree with—his later views in his book on the subject.

On page 74 he discusses the “several aspects” of the term salvation.

On the same page he notes, “The Romish-Arminian position is fundamentally based, not on exegesis of Scripture, but on certain assumptions in secular philosophy.”

I didn’t find much else of particular interest in the volume. Probably this is his “sub-par” version and he did not get to improving it before his death because of other projects he was working on. The cover design certainly is sub-par.