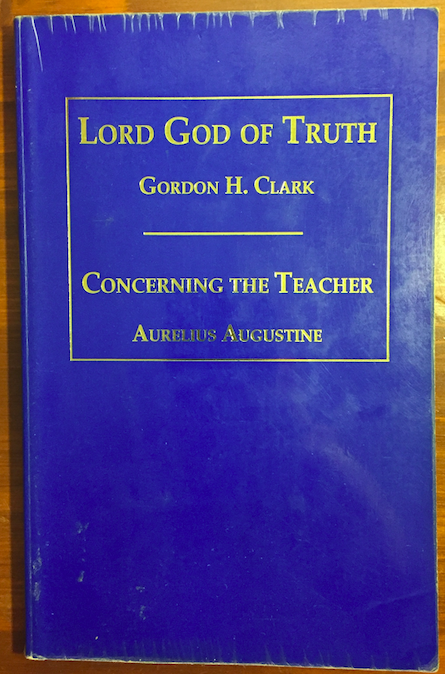 There are some complications with the bibliographic header above. The volume as printed actually contains two books, Clark’s Lord God of Truth and Augustine’s Concerning the Teacher. Then, while the book has a first edition copyright 1986 and second edition copyright 1994, I believe it was originally printed only as the second edition. And finally, though I listed the page total as 47 that is only for Clark’s section; with Augustine’s section added it runs to 95 pages.

The only reference to Lord God of Truth in Clark’s correspondence is in a letter to John Robbins dated 1984 (no day, no month) saying “Lord God of Truth is not yet typed.” This probably indicates that the writing of the book was completed in that year. The last couple years of Clark’s life were remarkable for the quantity (if not the quality) of his writings. Though he was in his eighties, the uptick in production can perhaps be attributed to his diminished professorial workload. When he moved permanently to Colorado in 1984 he would no longer teach, but have the last year of his life dedicated to writing.

Actually, another reference to the book, with a slightly different working title is found in a letter of Clark’s to Greg Reynolds, dated 12/9/1983. Clark writes, “Then too I am working on The God of Truth – emphasize truth and Augustinianism + of course attacking empiricism. But today’s semi-orthodox Christians are almost ignorant of church history and have no idea of the contrast between Plato-Augustine and Aristotle-Aquinas.”

As for the book itself, following the introduction it starts with a critique of the empiricism of John Locke and Thomas Aquinas. Clark then proceeds to Augustine and references his De Magistro, the original Latin title of Concerning the Teacher. Clark notes that Augustine “may not have purged his thought of all empirical elements.” (p. 13) “Nicholas Malebranche (1638–1715) developed non-empirical Augustinianism.” (p. 13) Malebrancheis quoted: “Man is not his own light. His substance, far from enlightening him, is itself unintelligible to him. … The human spirit … can indeed see the light, but cannot produce it … they can discover eternal truths, immutable and necessary, in the divine Logos. … it is solely the divine Logos who enlightens us, by the intelligible ideas which he possesses, for there are not two or several wisdoms, two or several universal reasons.” (p. 14) This matches “the Augustinian principle that our only Teacher is the Logos.” (p. 14)

Clark notes that Jonathan Edward provides “some Scriptural support for the doctrine of divine illumination.” (p. 17) Edwards speaks of a divine and supernatural light immediately imparted to the soul. Immediate, and hence sensation cannot be the means. “Both men [Malebranche and Edwards] show that Christianity cannot be empirical.” (p. 18)

A chapter on “Sensation” argues that the purpose of the senses is not knowledge acquisition. “Malebranche, following Augustine, defines the purpose of sensation to be that of preserving the body from danger.” (p. 18) Clark then addresses various Biblical verses claimed to give credence to sensation as knowledge producing.

Chapter 6 is on “Causality and Causation.” Clark argues “Experience at best teaches us that one event follows another. It never shows that one causes the other. Experience gives sequence, not causality.” (p. 24) Causes only produce effects if no other causes intervene. “Scripture does not teach mechanism, but asserts that the word is governed teleologically by purposes that cannot be restrained nor understood.” (p. 27)

Continuing the critique of empiricism, chapter 7 opposes the theory of images or “Imagination” and chapter 8 discusses “Induction.”

The final chapter, Chapter 9 on “Lord God of Truth” concludes the volume with some positive comments on Clark’s own view. These are the last words Clark would write on his theory of knowledge. And, while I think his theory is in many ways incomplete or at least not adequately explained, there is still much to learn from it, and it seems to be more promising than the epistemology of other Christian thinkers.