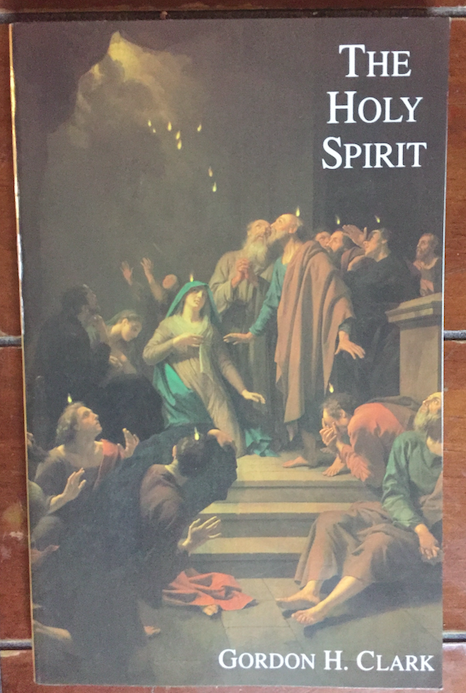 A draft of this book is in Dr. Clark’s papers at the PCA Archives. There it is called “Concerning the Holy Spirit.” It appears to have been written some time after 1980. A reference in the published text to “early 1983” (p. 64) possibly helps date the volume, but the draft could be earlier.

Clark wrote to John Robbins on Dec. 3, 1984, “You also say you would like to publish Christ and the Holy Spirit. I do not remember writing that title. Do you mean Concerning the Holy Spirit (123 pp)? You suggest I send it to you in six months.”

This is the only reference to the book in Clark’s correspondence.

From this book then Clark gave five “Lectures on the Holy Spirit” at Sangre de Cristo Seminary, the audio of which is available on the website of The Trinity Foundation.

Early on Clark mentions books on the Holy Spirit by each Abraham Kuyper and John Owen. He praises both books, but references Owen’s book more frequently throughout this volume.

In the first chapter of the book an important view of Clark’s is mentioned. That is, he believes that we should “relinquish” the word nature and replace it with the term definition. This eliminates ambiguity.

One thing I realized while reading the first chapter is that Clark commonly argues by starting off with weaker and less clear verses, builds his case, and then lays the hammer down with the most pertinent verse or verses. This approach from the lesser to greater is opposite the way probably most theologians argue but it seems to me to be more effective.

The second chapter defends the teaching that the Holy Spirit is a person. I’m grateful for this chapter since it is a subject I’ve not found anyone else cover in such detail. The Biblical evidence cited certainly overwhelms the Sabellianism of the Oneness Pentecostals. Of course, it has implications on other doctrines as well. Less directly but just as assuredly it shows the errors of the Jehovah’s Witnesses. And, perhaps more surprisingly, Clark notes a couple of times in the book that the Apollinarian view of Christ is common among students and even seems to be Billy Graham’s view. Incidentally, this is one doctrine (Apollinarianism) that Clark’s work on The Incarnation so clearly avoids. Jesus has a human soul and human mind (as well as a divine mind) as the Church has always taught; or at least clearly taught since the First Council of Constantinople.

I like Clark’s view of prayer books: “though vigorously objecting to compulsory imposition, I regard the prayers, with the exception of one phrase in the whole book, of the Reformed Episcopal service as exceptionally commendable.” Likewise, it is hard to been entirely opposed to using the Book of Common Prayer. We’ve been praying some of the prayers from that book at our Thursday morning prayer service and have found it quite wonderful. Clark notes, “Dear reader: Do not think that I despise the collects [prayers in Book of Common Prayer]. I wish all Presbyterians would use them.” (p. 55)

In his classic logical style, Clark writes, “It is worthwhile to note that Mary was not sinless. In the Magnificat (Luke 1:47) Mary rejoices in God her Savior. Had she been completely without sin, she could not have had a Savior.” (p. 60)

A long quote on holidays is worth noting: “Scripture does not authorize us to celebrate Pentecost. The same is true of Christmas. It began as a drunken orgy and continues so today in office parties The Puritans even made its celebration a civil offense. And yet an argument for celebrating Pentecost was, “Don’t all Christians celebrate Christmas and Easter?” No, they do not. My father’s family and church never celebrated Christmas, nor did the two Blanchard administrations in Wheaton College. But what about Easter? Surely we must celebrate Easter, shouldn’t we? Yes indeed, we should, as the Scripture commands, not just once a year in the spring, but fifty-two times a year.” (p. 65) Well, it might be worth pointing out that Clark has Christmas and Easter sermons in his files that he gave at the church he pastored in Indianapolis. Were these sermons given without celebrating those days?

Another interesting comment is found on page 75 and fits in with Clark’s paper “The Proposal to Abolish the RPCES.” He writes, “The Reformed Presbyterian Church was once a faithful Calvinistic Covenanter body. But by 1982 it had so deteriorated that it committed suicide.”

Of course being a book on the Holy Spirit the modern speaking in tongues movement is castigated. The final chapter is on errors of Pentecostalism.