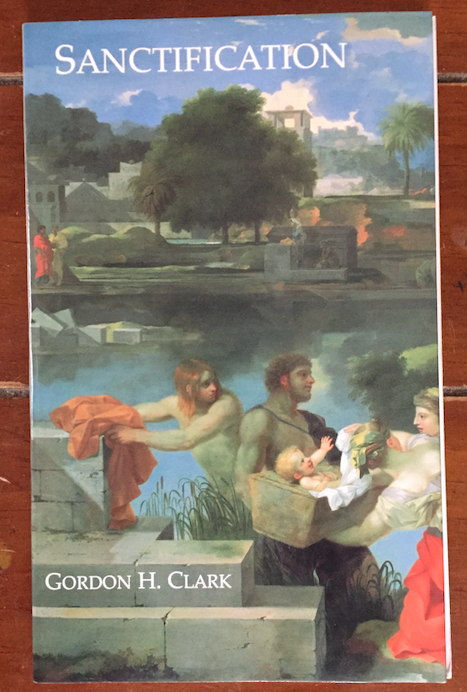 This is another volume that was originally a chapter in Gordon Clark’s systematic theology.

I’ve written some about his view of sanctification in these two previous posts:

Clark’s Sanctification continues to agree with and confirm what I wrote in those two articles. For example, in the introduction he notes the broader of the two uses of the term “salvation” when he explains, “salvation is a broad term that includes regeneration, justification, adoption, sanctification, and glorification.” (p. 1) And, he writes, “Sanctification is neither instantaneous, nor is a man passive therein. … It is indeed dependent on the contiguous power of God, but it is also the activity of the regenerated man. Both God and man are active.” (p. 1) And, in the first chapter, “Believing is indeed an act of the human self, caused by God to be sure, and totally impossible except for regeneration and God’s gift; but it is nonetheless a human volition.” (p. 3.)

Clark then works through the aberrant theories of sanctification of Pelagius, Rome, and John Wesley. Ryle is better, though not without some issues especially with the doctrine of assurance.

A chapter on perseverance notes that “this doctrine [of perseverance] is so frequently and forcefully stated, in both the Old and New Testaments, that it is hard to explain how any Christian can be an Arminian.” (p. 39) “Arminians are forced to invent utterly ridiculous misinterpretations.” (p. 43)

What follows are the most extensive of Clark’s comments in any of his writings on the subject of Baptism (and then on Communion as well). A number of Baptists, apparently lacking a philosopher in their own midst, have extensively adopted Clark views, and this is positive gain. But Clark’s full system is the Westminster Confession and its view of Baptism is essential to its system. I’ve actually found it more common for Baptists to discard their Arminiansim for Calvinism than to discard their insistence on “believer’s baptism” (more accurately described as “professer’s [and I’m spelling this correctly] baptism”) and its pairing with immersion and accept the Reformed view. [Incidentally, I can only imagine that the pair of credobaptism with immersion is an historical artifact, for there is no logical connection.] Anyways, Clark’s conclusion on the one matter is that “Scripture nowhere requires immersion; that no clear cases of immersion are described; that sprinkling and pouring were common, and hence to insist on immersion is to add to God’s requirements.” (p. 59) Clark’s defense of baptizing infants is the fairly standard argument:

“The basic authority for baptizing infants is found in the terms of the Abrahamic covenant. Infants, male infants, were circumcised. Now, as the Lord’s Supper grew out of and replaced the Passover meal, so baptism replaced circumcision. The most definite passage on the subject is Colossians 2:11, 12 where baptism is called the circumcision of Christ. The less definite but more pervasive material concerns the continuance of the Abrahamic covenant, as found in Galatians 3:15ff.” (p. 61)

Clark explains further, “The correct principle of interpretation is not the Baptist one of discarding everything in the Old Testament not reasserted in the New; but rather the acceptance of everything in the Old not abrogated by New Testament teaching. Therefore to be more explicit, e it noted that the Old Testament church and the New Testament church are the same church. Not only does Acts 8:38, “the church in the wilderness” so assert, but even clearer is Romans 11:17-24. There was a root; one of its branches was Israel; this branch was broken off; a Gentile branch from a wild olive tree was grated into the good root; and God can and will at some future date graft back the natural branches into their own olive tree. The whole, as Galatians 6:16 indicates, is the Israel of God. Since, now, children were members of the ancient church, and were given the sign of the covenant, so also now.” (p. 61-62)

And finally, “Anyone who wishes to exclude infants from the church is under obligation to show that the New Testament alters the procedure that dates back at least to Abraham. It is the Baptist who must bear the burden of proof. He must explain how it comes about that children who were members of the church before the time of Christ, are now excluded from the church. All other Christians are satisfied with the household baptisms of Acts 16:15, the jailer in Acts 16:33, and the household of Stephanus in 1 Corinthians 1:16.” (p. 62)

On the topic of the Lord’s Supper, Clark’s most interesting argument is against Rome and Luther. He writes, “If the Scripture says that the bread is the body, it does not say that the wine is the blood. What Jesus said, and the words Paul reports are, ‘This cup is the new testament in my blood.’ Now, if one wish to insist on literal interpretation, it is not the wine but the cup, a silver vessel, that is—what? Not the blood of Christ, but the new testament in his blood. Hence a literal silver cup is literally the New Testament.” (p. 77-78)

Referencing Hebrew 9:25-28 and Hebrews 7:23, Clark strongly argues against the Roman re-sacrificing of Christ. Lastly on the Lord’s Supper, Clark notes that he might be “too generous toward Zwingli.” (p. 84-85) Clark in a sense tries to rescue Zwingli in saying that a memorial view might not be “merely” so. He writes, “It is hard to explain a memorial of Christ’s death that is nothing more. Surely participation in such a service produces some spiritual result.” (p. 81) “Are we not nourished or edified by understanding the significance of the sacrament?” (p. 81)

In the final chapter on “The Christian Life” there is a reference to a confusion in Van Til: “Barth makes God the ‘totally other’; but there are also some who even clearly assert that God can be known, and ye so emphasize incomprehensibility as to contradict their more orthodox assertions. One such theologian, who indeed uses the phrase ‘thinking God’s thoughts after him’ denies the phrase in another place by insisting that God’s knowledge and the knowledge possible to man do not coincide at any single point.” (p. 87-88)