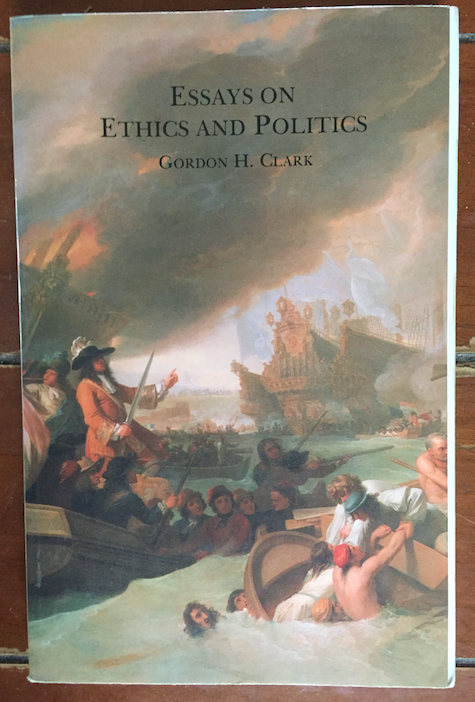 This is a must have volume for anyone interested in the writings of Gordon H. Clark. It contains forty-three essays previously published in various journals.

A lot of these essays were eye-opening to me when I first read them about ten years ago. Now, having read Clark’s writings and gained both a seminary degree and some ministerial experience, I find many of these essays rather elementary. Or, I should say rather Biblical. What once felt like Advanced Calculus now is as comfortable as addition.

Though this volume was published in 1992, John Robbins made efforts to publish a collection of Clark’s essays as early as 1976. In a letter of 10/9/1976 to John Robbins, Clark wrote:

“Your reference to the possible publication of my essays interests me very much, naturally. But you were not too specific, no doubt because you do not know what it would entail. For example, would you be interested in articles on Plato, Aristotle, and Plotinus, already published years ago in the philosophical periodicals? Would you be interested in some ecclesiastical controversies of the 1940s? I have four lectures I have given publicly, but have not published. And there are a few others that can be polished a little to make them suitable. Besides these there are chapters in several books that Carl Henry edited. I am not sure whether you could obtain permission or not. Then there must be details that you have thought of. If you wish, I would be happy to hear more of your plan.”

Two more letters that year from Robbins to Clark show progress being made on collecting published articles of Clark’s, including some later used in Essays on Ethics and Politics. It is unknown to me why the essays were not published sooner, but the record shows Clark’s interest in such a project.

Reproduced in this volume is Clark’s essay “Determinism and Responsibility.” This, in fact, I would contend is the single most important essay he ever wrote. It solves one of the most challenging theological questions that has plagued theologians for centuries and paves the way for Clark’s later writing on “God and Evil.” Clark writes, “by calling a man responsible we mean he may be justly punished by God, for this definitional truth is the key to the explanation of why a man is responsible for the act God determined him to do.” (p. 45)

The essay “The Puritans and Situation Ethics” is one that Clark presented and of which the audio is available here.

Probably the overriding theme of Clark’s ethics in these essays is “Divine Command Theory.” He never uses that term, but his view can be described as such. That is, right and wrong are known to man only as God has commanded them. All non-revelational attempts to discover ethics are bound to fail. We must rely on the Word of God.

2 thoughts on “GHC Review 46: Essays on Ethics and Politics”