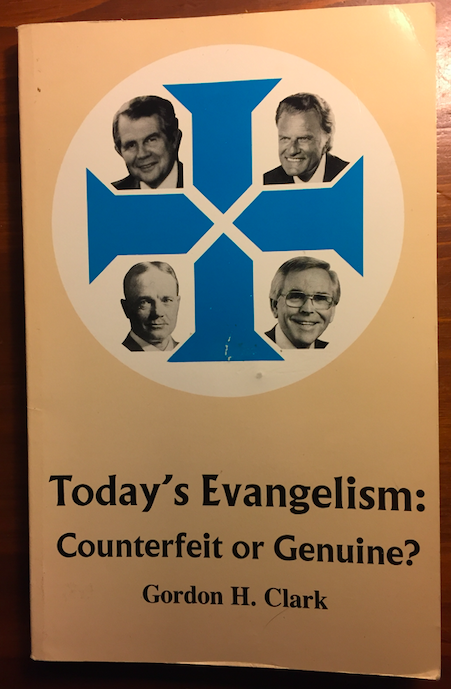 The time of the writing of this book is somewhat of a mystery to me. Which “Today” its title is in reference to is hard to determine. Nowhere in Clark’s letters is the book mentioned. A full typed draft of the book is found in four folders at the PCA archives. From the draft it is seen that the original title was “Evangelism and Emotion.” There is no date on the draft, but a letter from 1969 included in the folder might indicate a terminus ante quem. If references to any later books or events can be found in the manuscript (or in the text of the book which appears to be essentially identical) that would push out the date of its composition.

Of historical interest to me as Clark’s biographer is that he began an example by saying, “When I was a graduate student, a highly respected professor suddenly died of ptomaine poisoning.” (p. 4) Here he is referring to food poisoning, and the subject in mind is almost certainly his dissertation advisor William Romaine Newbold who died in 1926. If so, this confirms information I’ve found elsewhere about the cause of Newbold’s death.

In this volume there is more discussion of the topic of emotion than anywhere else in Clark’s writings. His main point is that evangelism is not to be measured on its emotionalism, but on its message—the evangel, the gospel.

Clark makes the interesting contention that “reliance on emotion and feeling was the source of modernism.” (p. 25). More completely, he says, “the Pietistic influence [emotionalism] combined with secular philosophy in Friedrich Schleiermacher to produce what we now call modernism.” (p. 27) “Christianity,” on the contrary, “is based on the Bible, on divine revelation, not on emotion.” (p. 32)

Chapter Five “What is Evangelism?” has an extended critique of the views of John Stott. A number of major errors are pointed out. For example, in opposition to Paul, Stott wrote, “Our objective is not to unfold to him [the unsaved person] ‘the whole counsel of God’ but to proclaim the essential core of the Christian gospel.” (p. 46) And even worse, Stott denied propitiation when he wrote, “We emphatically do not believe that He did this to placate and buy off he anger of God.” (p. 49) Clark finds a book by J. I. Packer to be a considerable improvement over Stott. Yet, “There are nonetheless certain points on which I believe Mr. Packer to be woefully wrong.” (p. 56) Included in Clark’s critique is that Packer believes that there are insoluble antimonies in the Bible. (p. 57)

Clark’s chapter on “Faith” is similar in argument to his Faith and Saving Faith.

The next chapter is a short one on “Assurance.” Here Clark has four points: (1) “assurance is possible” (p. 90), (2) “The Gospel promises the possibility of assurance.” (p. 92), (3) this certainty, as the WCF says, is founded upon the divine truth of the promises of salvation and witness by the Holy Spirit in us, and (4) “although salvation can never be lost, assurance can.” (p. 95) As to the last point, clearly Clark does not believe that assurance is essential to faith. Rather, he believes, faith can lead to assurance.

In one of only a few references in his writings to Francis Schaeffer, Clark notes positively “an excellent example” from the former’s The God Who is There.

Overall, this book is pretty good but it doesn’t say much that hasn’t already been said in other volumes of Clark’s. Perhaps had it come out when it was first written it would have been the first place in Clark’s writings to see some of these ideas and therefore a more significant book.

One more thing. The cover seems to be poorly designed. Two of the four men pictured there (Pat Robertson and Robert Schuller) aren’t even mentioned in the book.