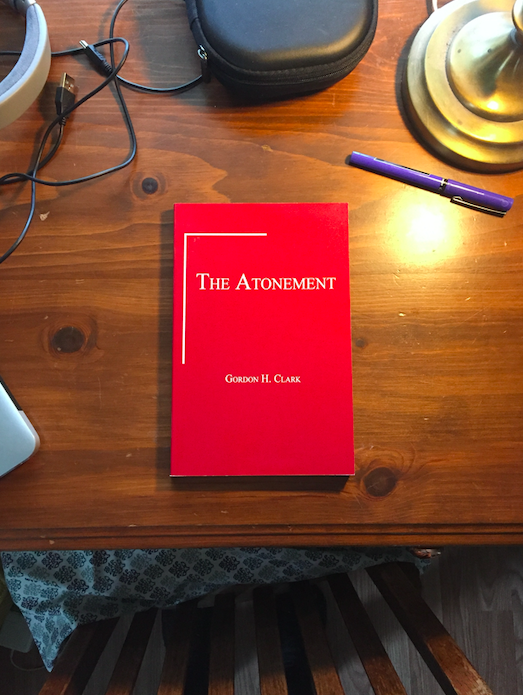 This is another volume that was originally a chapter in Gordon Clark’s systematic theology. Thus its publication date is about a decade later than it was originally written.

We find here that Clark approves of the “Covenant of Redemption” (p. 11-17) He writes, “such an agreement between the Father and the Son is by no means an obscure idea buried in one or two subsidiary phrases. On the contrary, the Scripture gives ample foundation to the doctrine.” (p. 13) And he then provides support. In a couple places Clark speaks of the Covenant of Redemption as being between the Father and the Son. Elsewhere (maybe O. Palmer Robertson? I’ve heard the Holy Spirit included in this covenant as well. It seems that Clark would agree, for he notes “1 Peter 1:2 also indicates a concerted plan in which the three persons of the Trinity all have a part.” (p. 16)

Clark then has a section on the Covenant of Grace. He notes, “The covenant with Noah may properly be viewed as an early form of the covenant of grace. God explained the covenant in fuller detail to Abraham.” (p. 19) In this section Clark provides a pithy critique of the errors of dispensationalism. This section is the lengthiest in Clark’s writings to address covenant theology, yet I don’t think there is any answer there to the question of “republication.” Still this quote is worth repeating:

“The Mosaic ritual, Paul explains, was a temporary arrangement because of the sins of the Israelites. It was to cease when the Messiah should come. Even during the Mosaic administration, the Abrahamic covenant was not disannulled, set aside, invalidated, or made of no effect. The Abrahamic covenant was operative all through the alleged dispensation of law. No one was ever saved by keeping the law. No one ever kept the law. Salvation, now, then, and always has been by grace through faith alone. Hence, from the fall of Adam there has been one, just one, continuing covenant of grace.” (p. 27)

In the section on “The Incarnation” we find one of Clark’s most quoted statements: “A paradox is a charleyhorse between the ears that can be eliminated by a rational massage.” (p. 32)

There is much of interest in this volume, but I was particularly drawn to the section on “The Vicarious Sacrifice” which is a defense of Substitutionary Atonement. Ever since I met someone at L’Abri who told me they deny this doctrine, I’ve been keen to understand better the Biblical view. Clark gives plenty of Scriptural support for it. (pp. 64 and 65)

Probably most of Clark’s readers are already Calvinists. So to an extent this book is preaching to the choir. But even a Calvinist can improve his understanding of the details. For non-Calvinists, I’d recommend reading Clark’s Biblical Predestination first and then The Atonement. You probably should read his Logic as well, and I always recommend Steele and Thomas’s Five Points of Calvinism, Defined and Defended.

I did have to laugh later in the volume when I came to Clark’s comment on John Murray:

“One must be careful when reading the works of John Murray. He has a remarkable control of the English language, is in most cases quite orthodox, but is sometimes deficient in logic. In addition to the example just cited, his booklet The Free Offer of the Gospel comes to a strange conclusion.” (p. 89)

Clark explains of that booklet written by Murray and Ned Stonehouse, “The two authors have used exegesis and argument in such a way as to produce a contradiction. But they are so sure of their arguments that they are unwilling to admit that they could have possibly made a mistake. This is not intellectual modesty. When one’s thoughts lead to contradiction, the logical and humble thing to do is to go back and find where the mistake occurred.” (p. 90)

In a section on traducianism, Clark gives Scriptural argumentation for the position. He writes, “Notes too that Genesis 46:26 speaks of ‘the souls that came with Jacob into Egypt, which came out of his loins.’” And, he notes, “When Even was taken from Adam’s side, there is no mention of he creation of a second soul. Eve totally came out of Adam (1 Corinthians 11:8).” (p. 113) “The most important argument for traducianism is based on Genesis 2:2, 3. ‘God … rested from all his work.’ ‘In six days the Lord made the Heaven and the Earth … and rest the seventh day’ (Exodus 20:11). ‘God rested from all his works (apo panton ton ergon)’ (Hebrews 4:4).” Creationism (of souls) has “the difficulty of thinking that God immediately creates sinful souls.” (p. 115) Throughout this section Clark refers to Charles Hodge’s opposition to traducianism and opposition realism. While Clark is then opposed to Hodge, he notes, “I consider Charles Hodge by far the best of all American theologians.” But, says Clark, “his Scottish common sense philosophy was fortified with too much usquebaugh before he imbibed it.” (p. 118)

The penultimate chapter on “The Sovereignty of God” is the lengthiest treatment in any of Clark’s writings of the idea of “necessity.” He argues not only that the method of salvation God chose was necessary, but that “Everything is necessary.” “Every detail is a part of the all-comprehensive divine decree. God foreordains whatever comes to pass.” (p. 132) Clark finds his defense for this necessitarianism in the immutability of God. He explains, “To suppose that anything could have been otherwise is to suppose that God could have been otherwise than he is. The salvation of the elect is part of the sovereign plan by which the universe goes on. God had to create–not because there was some power external to him, but because he is God. A God who might not create, or would not have created, is simply not the Biblical God.” (p. 133)

The final chapter then is a concise defense of limited atonement.

The cover of my copy of the book (the 2nd edition) is so uninspiring that I’ve chosen in this instance to include my desk as background to a picture of it. The desk at least cannot be less inspiring. 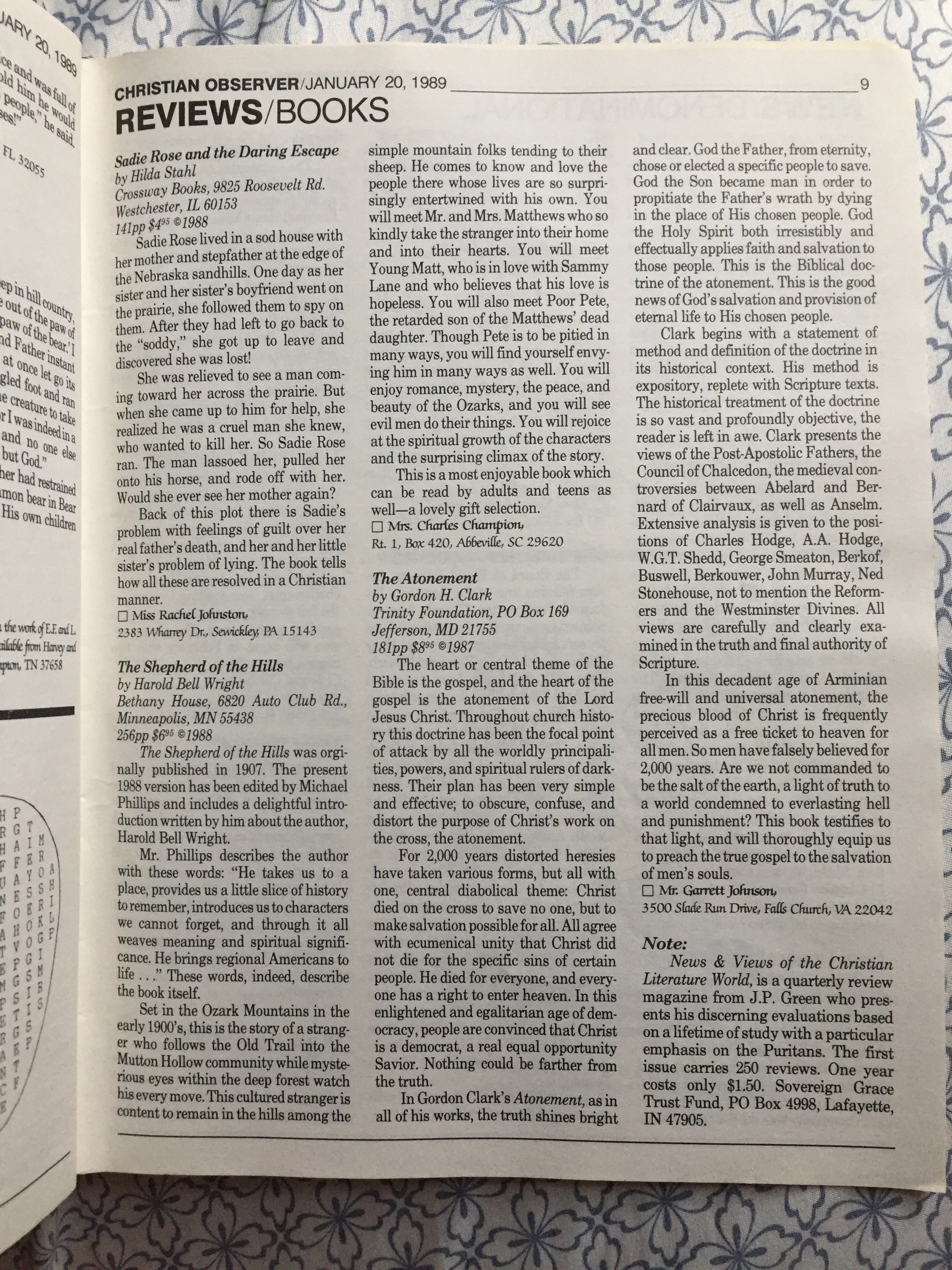 8 thoughts on “GHC Review 42: The Atonement”