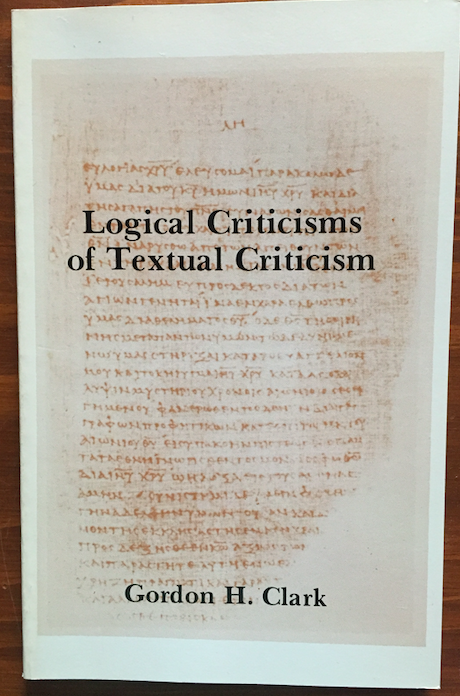 Logical Criticisms of Textual Criticism grew out of Clark’s earlier work “Desultory New Testament Curiosities.” And, as I noted in the previous review, it was originally printed as an appendix in Clark’s commentary First and Second Thessalonians.

It seems that Clark got seriously interested in textual criticism only later in life.

In July of 1983 Clark noted to Greg Reynolds in a letter:

“I am analyzing Metzger’s methods in Textual Criticism. He has many invalid inferences + he frequently contradicts himself by insisting on certain evidences in one place but rejecting the same evidence in another.”

“Among other things I have almost finished Desultory New Testament Curiosities. Part one is a series of typical misunderstandings of various verses. Most of this is quite elementary and might be welcomed by an average communicant member. Part two is a logical analysis of the methodology of contemporary textual criticism. I try to show that in genera it is (1) subjection, (2) inconsistent, and (3) fallacious. I do not do textual [criticism] myself; I stick to a logical analysis of the methodology. The two parts are largely independent of one another. Either could be published separately as a pamphlet.”

Thank you for letting me read your manuscript on textual criticism. All of my training has been in the tradition of Westcott and Hort so it is hard for me to be sympathetic to your viewpoint. I also have the disadvantage of not having read Hodge, Farstad, and company. (Bergon I have read!)

1. I would like for you to state your purpose more clearly at the beginning. You do so on page 14, but after reading through the article my reaction as “tu quoque”. You seem to have shown the subjectivity of Metzger, et. al. By your own subjective comments.

2. Most of your arguments against the critics are not based on logic so much as on alternative hypotheses. Some of your hypotheses are reasonable, but certainly not compelling.

3. I am glad you think neither the KJV nor the TR represent the original text per se.

4. What is wrong with “dynamic equivalence”? Have Hodges, et cet. Explained your position. I rather like it (DE) and don’t think lev or kardia are well-translated by “heart” in many of their occurrences.

5. Am I not right in assuming from your epistemology that the whole discussion is “opinion” anyway?

P.S. I’m sorry that I could not deal with individual details. I feel too much pressure to grade term papers.

“You mention textual criticism. I hope my treatise on the subject will be published. Hill’s book is not too good, mainly because he goes into other matters about which he knows very little. But Pickering is excellent! The New King James has followed Hodges + Farstadt’s Majority Text. This is not the Textus Receptus because the T.R. was based on less than 20 MSS. This text is based on maybe a hundred Byzantine MSS. Its critical apparatus is hard to decipher, but with the information in the Aland-Metzger notes, there is sufficient information.”

Finally, of relevant letters on the subject at hand, Clark received a letter from Theodore Letis:

While I have learned a great deal about you since embracing the Reformation Faith of Historical Protestantism and since arriving here at Westminster, because of my prior exposure to Professor Van Til’s approach to apologetics, I never really thought I would have an occasion to write you (I have your work Language Truth and Revelation as well as Reason Religion and Revelation and your history of Philosophy and have read portions of all of them). However, after having read your three part essay on Textual Criticism I am pleased as can be to call you an ally. Moreover, I saw clearly in your argument the value of logic in this field. You scored a point that I have been stressing for years and that is that students who have not necessarily been initiated into the mysteries of Text Criticism should nevertheless see it as their responsibility to subject this discipline to a close scrutiny to make certain that a naturalistic methodology is not giving the rest of the church the marching orders as to what is Scripture and what is not. I, too, have to admit that I am not text critic. Nevertheless, as an aspiring church historian I have felt the call to document an intellectual history of the discipline, either for a Th.M thesis or for a doctoral dissertation.

Allow me to offer some comments on your essay.

As a tutoral student of the late Dr. Edward F. Hills, whom I also consider my mentor to some extent, I learned a great deal about the history of the discipline within the modern era, since Dr. Hills studied under such men as Kirsopp Lake and Cadbury at Harvard while doing his doctoral work. Furthermore, so far as I can tell, he is the only Reformed Theologian in this century ever to gain the status of a text critic proper, and thus possess the requisite attainments to offer a modern integration of historic Reformed theology with the discipline (an area that Warfield failed miserably at, having fallen under the spell of Westcott and Hort). Hence, I have learned to take greater stock in the research, arguments and conclusions of Dr. Hills over the Baptist, dispensational Dallas school approach to the so-called “Majority Text.” This is not just a convenient dismissing of Hodge, Pickering, Farstad, Sturz, Robinson and Martin, because they have all contributed in unseating W&H. Rather, because of their orientation, in addition to their lack of recognized status in the field, it was obvious to me that they would not gain any ground in text critical circles, which is what they really had in mind, a turn-around in the discipline, based on naturalistic arguments alone. The enclose essay will better demonstrate what I am trying to say.

Your expose was masterful. The practical examples illustrated the problem as clearly as could be expected I only hope the seminary students that read this will really consider what you have shown. So many of them are infirmed by the intimidating influence that the name Bruch [Bruce] Metzger invokes (and well it should he has well earned the place as the most accomplished N.T. text critic in American in the 20th century). As the situation presently stands, to go against the modern consensus in this field, no matter how impressive the evidence or the arguments, on stands self-condemned for being so ill-informed as to oppose the established school. Hence, Pickering, van Bruggen and others are dismissed out of hand. This is most frustrating.

In your first part you mention 3000 discrepancies in the Gospels alone. By this did you mean “variants?” It is not clear what you intend here.

Concerning the number of patristic citations in this field, you speak in terms of “hundreds.” There are more like hundreds of thousands.

You refer to Burgon as a Bishop. He was a bit out of step with his own time to have ever merited such a title. His was a Dean but no bishop (Westcott was).

In mentioning Hills work as an “earlier” work it may leave the impression that it is no longer available. I have taken the liberty to send you a copy of the recent 4th edition (1984) which does not differ from the 3rd edition but for the cover and new Preface.

I quite agree with your judgment that the “excursion into the philosophy of science” is somewhat irrelevant to the topic. But Dr. Hills was a bit of an exile after turning from defending the Alexandrian text to defending the Byzantine text, giving up the notion of making an influence form within academia. Hence he attempted to show an historic, Reformation approach to the other sciences that eventually took over both textual criticism and Biblical Studies in general after the Enlightenment. Hence, his work is a mini-curriculum.

Again I want to stressed [stress] that you essay was most exciting to read and offered me a great deal of encouragement. It was well done and I know the time that you put into it.

Enclosed, please find a few essays that I have written since arriving here at Westminster. They will soon be published in a work that I am presently co-editing, to be titled: The Majority Text: Essays and Reviews in the Continuing Debate. If you have the time to read them over and offer some remarks I am sure that I would benefit from this. I suggest that you read them in order: Beza, Owen, Lewis, Introduction.

I look forward to hearing from you.

In the love of Christ,

P.S. I have a multi-media presentation where I try to bring this most important subject to the churches. To date of [I] have delivered these lectures in over 50 churches of every majory [sic] Protestant denomination. Perhaps the students at the seminary could benefit from such a lecture series. I am enclosing a program that will give you an idea of the content.

All of these sources have been referenced to benefit the reader of this post who has a considerable interest in textual criticism and Clark’s views on the subject. Now, having noted all of this, something of the book itself should be noted.

Clark argues that modern Bible translations often seem to make changes merely for the sake of change and these are not usually improvements. Yet, a number of comments show that he was by no means a King James Only proponent. He writes, for example, “One should not conclude from this that all the modern changes are bad. In some, even in many places, the Revised Standard Version is better English and more accurate in translation than the King James.” (p. 6)

Clark notes some writings by Jakob van Bruggen, Edward Hills, Zane Hodges, and Arthur Farstad, but argues that “perhaps the best production for immediate reading is Wilbur N. Pickering’s The Identity of the New Testament Text.”(p. 11)

Arguing against the textual critics’ preference of “weight” over number, Clark writes, “If a score or two score manuscripts have a single ancestor, it implies that a score or two score copyists believe that ancestor to be faithful to the autographs.” (p. 15) He continues, “But if a manuscript has not a numerous progeny, as is the case with B’s [Codex Vaticanus’s] ancestor, one may suspect that the early scribes doubted its value.” (p. 15)

Regarding the Pericope de Adultera (John 7:53 – 8:11) Clark writes, “It is doubtful that the original contained the verses because it is unlikely that so many scribes would have deleted it. On the other hand, if it was not in the original, how can one explain so many manuscripts that include it? … Just perchance the Apostle John himself wrote a second edition of his Gospel, adding the paragraph.” (p 39)

The majority of Logical Criticisms of Textual Criticism consists in the discussion of example verses. Clark shows that the ratings (A, B, C, or D) are often poorly chosen.

It is also of interest to note that Clark seems to argue in passing for the early date (pre-70 AD) for the writing of Revelation. (p. 47)

The reader may be disappointed not to find Clark’s own theories further elaborated upon, but must settled for his final statement: “If we want to get closer to the very words of God, we must pay attention to the Hodges, Farstad, and Pickering, and The New King James Version.” (p. 49)

What seems to be missing from this volume is any comment as to God’s promise to preserve his word through the ages. This, I believe, is the strongest argument for the Majority Text.