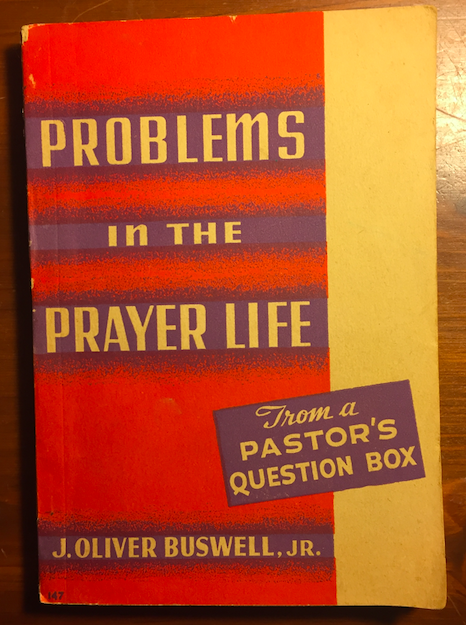 This book came out in 1928, just two years into J. Oliver Buswell Jr.’s tenure as President of Wheaton College (1926 – 1940). It is, in fact, Buswell’s first book; written before he joined up with J. Gresham Machen’s reforming movement in the Presbyterian church, before he was a founding member of the Bible Presbyterian Church, and before he met and hired Gordon Clark. In a letter to Clark, Buswell admitted of his earlier days, “I think I told you that my own theological training was largely negative. I had to spend much of my time and energy defending my simple evangelical faith and answering the attacks of unbelief in Minnesota and Chicago. I never had the privilege of studying under sound and scholarly teachers. I have, however, tried to compensate for this deficiency and have found Hodge most helpful.” (JOB to GHC, Nov. 25, 1935) Even so, by 1928 Buswell’s theological views must have been mostly solidified.

Buswell is seen to be more Calvinistic than, for example, Francis Schaeffer. He writes, for example, “A lost soul has no power within himself to turn from sin” (p. 27) and that the human side of prayer is “entirely dependent on God.” (p. 11) But I can’t help but think that Buswell isn’t the most consistent of Calvinists, for he writes “Acknowledging sin, turning from sin, and accepting the Lord Jesus Christ as our Savior, we must merely allow Him to work in us both the willing and the doing of His good pleasure.” (p. 34) Buswell’s view thus seems to be similar to views like that of the Lutheran C. F. W. Walther who holds that salvation is default and only our resistance thwarts God’s desire. But this is all wrong. God overpowers all our resistance through the Holy Spirit given to believers. God’s grace is irresistible; He is not waiting for us to allow the Spirit to work in us.

As to the subject of the book itself—on prayer—Buswell has numerous beneficial insights even if his writing is not always the most logically ordered or easy to read. He notes that there are Scriptural examples of prayer being directed to Jesus Christ, not merely to God the Father. (p. 14) The clearest is Acts 7:59 – “While they were stoning him, Stephen prayed, ‘Lord Jesus, receive my spirit.” I particularly like Buswell’s quote: “My testimony as a pastor, and as an army chaplain, is that, though one may be saved in the last moment of his life, men usually die as they have lived.” (p. 38) And this one, “We are to have faith in Him, not faith in faith! Faith in our own faith accomplishes nothing but our own undoing. Faith in God saves.” (p. 62) Buswell also challenges the reader (in multiple places) to keep track of their petitions to God so that they can see later how He has granted them. And he has a section on “intercession” – the praying for others, which is a topic I have not specifically read about elsewhere that I can recall.

One other thing of interest is Buswell’s mention (in at least two places) of Professor Elsie Storrs Dow who was then head of the department of English at Wheaton College. Dow (1859 – 1944) was a figure I came across in my research into Gordon Clark’s biography. She was a long-time professor at Wheaton; teaching there for 46 years.

I don’t recommend that you run out and buy this 90-year old volume, but its not a bad read.