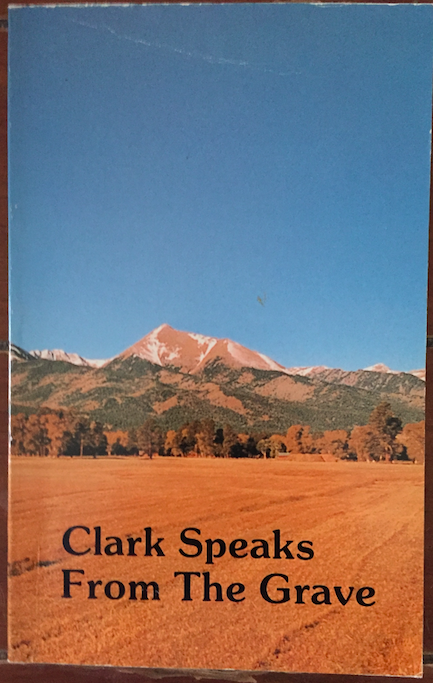 Clark Speaks from the Grave is a book written in second person narration containing responses from Clark to some of his critics: Vern Poythress, Robert Reymond, Gordon Lewis, and John Warwick Montgomery. As I’ve mentioned in another post, though this book was published posthumously, Clark knew of the book’s title before he passed away.

Clark contentions against Robert Reymond I’ve previously written about here. I might just add one more interesting note from the present volume: “In reviewing the several apologetes who oppose Clark, one gets the impression that some are subconsciously Kantian.” (p. 22) By this I take it that Clark believes these apologetes are combining empirical and a priori theories of knowledge.

When it comes to the third critic, Gordon Lewis, Clark notes that he “stated Clark’s position better than any other critic.” (p. 31) Yet even Lewis makes some mistakes. Lewis’s criticisms of Clark generally fall into the category of misunderstandings of his views, not therefore rising to the level of actual criticisms. An important quote in this chapter is the following: “The term certainty appears often in religious writings. Usually it is a useless word. People are certain about so many things. Many people used to be certain about the potency of some witch’s brew. General McClellan was certain that Lincoln was a bad president. One should take caution when anyone begins talking about certainty.” (p. 45)

The fourth critic is John Warwick Montgomery who Clark contends “depends on the facts of history as facts” but “seems to have no notion of what a fact is.” (p. 52) Because of this there is a “consequent inability of a reader to guess what Montgomery is talking about.” (p. 56) Montgomery’s other error, contends Clark, is that he “thinks he can discover significance in the observable facts themselves.” (p. 56-57) Clark follows with important comments on the Is-ought problem which Montgomery fails to surmount.

The final chapter is on “The Problem of Individuation.” Here Clark contends that many of the objections against his view are fallacies of begging the question, assuming what needs to be proved. And in the conclusion section of the book Clark sums up the whole endeavor in pointing out the necessity of clear definitions.

This volume should probably only be read after gaining a solid grasp of the dialogue which occured previously between the men in view.

Note: The cover picture is of Horn Peak in the Sangre de Cristo mountains and the Wet Mountain Valley where Dr. Clark was buried.

2 thoughts on “GHC Review 39: Clark Speaks from the Grave”