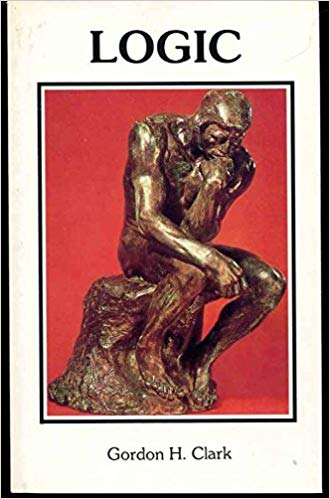 Logic—proper reasoning—is a central component of Gordon H. Clark’s philosophy. His interest in logic goes back to at least his days at the University of Pennsylvania where he studied under Henry Bradford Smith, an author of four logic textbooks. Clark’s main contribution to the field of Logic is his refutation of Russell/Boolean symbolic logic, found in various forms a number of his later books. (including chapter 8 of the present book) Though Clark wrote to Carl Henry in 1958 saying he had decided not to write a textbook on logic, by 1979 (as noted in a letter to Howard Long) Clark had finished typing the manuscript of a “text book on Logic for high schools.” With delays in publishing the book didn’t come out until the year of Clark’s death. His correspondence shows that he at least was able to see the galley proofs of the final manuscript, if not the book itself before his death.

That Clark could go from writing books on philosophy to biblical commentaries and then a book on logic shows his versatility and wide expertise. But his writings are not haphazardly chosen. Rather, they are designed all to fit together in explaining a Biblical philosophy, and for this philosophy logic is just as important if not more so than any other topic on which Clark writes.

Rather than a short review, a more detailed summary is in order for this book. The following will be a list of important things to learn about logic from this book:

“An argument is a series of reasons which one uses to prove the truth of what one wishes to assert.” (p. 1)

“Such an argument, one in which a part is omitted or taken for granted is called an enthymeme.” (p. 3)

“There are two kinds of ambiguity. When a single word has two meanings, we call it equivocation. When the double meaning attaches to a phrase, we call it amphibology.” (p. 7)

The fallacy of composition– an informal logical fallacy in which the characteristics of the part is attributed to the whole. (p. 12)

“Ad hominem argument. The fallacy consists in appealing to the character, the situation, the beliefs or prejudices of the person to be convinced, instead of using premises that deal with the subject under discussion.” (p. 15)

“Another and quite common fallacy is called post hoc ergo propter hoc. The translation is ‘After this, therefore because of this.’” (p. 17)

“A valid argument cannot contain any term in its conclusion that has not already occurred in the premises.” (p. 20)

“This is called a connotative definition, because it lists the necessary and sufficient qualifications.” (p. 21)

“A denotative definition explicitly mentions every individual—person, place, or thing—in the class.” (p. 21)

“In one sense there can be no debate about definition. An author may say: This is what I mean by the word ___. The reader then must take the word in that sense. There is, however, a possibility of debate as to whether the author’s definition is close enough to English usage to avoid serious misunderstanding.” (p. 25)

“An ostensive definition consists of pointing at the object.” (p. 25) “However, it is hard to point one’s finger at the square root of minus one. Or the number three, for that matter. Similarly no one has ever seen a line or a triangle. And even in the case of visible objects, Augustine’s De Magistro (The Teacher), shows that ostensive definitions are impossible.” (p. 26)

There are four forms of declarative sentences: All a is b, No a is b, Some a is b, and Some a is not b.

“Only declarative sentences are true or false; and it is this common character that is important for propositions.” (p. 28)

Immediate inferences have one premise, one conclusion, and no middle term. (p. 32)

An inference is valid, whenever the form of the conclusion is true every time the forms of the premises are. (p. 33)

“The validity of an argument does not guarantee the truth of any of its propositions.” (p. 37)

“An affirmative form is one that does not distribute its predicate.” (p. 38)

“A negative form is one that distributes its predicate.” (p. 39)

“A universal form is one that distributes its subject. A and E are universal.” (p. 41)

“A particular form is one that does not distribute its subject. I and O are particular.” (p. 41)

“Two forms are contrary if they cannot both be true but may both be false.” (p. 43)

“Subcontraries are forms that cannot both be false, but can both be true. O and I are subcontraries.” (p. 44)

“Syllogisms have two premises; those with just one are called immediate inferences.” (p. 46)

< is the symbol for implication

There are 32 moods (individual cases) of immediate inference. (p. 51)

“At the present time there is a large body of minister and theologians who reject logic. They are willing to use valid arguments for a few steps, but then they say faith curbs logic. In other words, if several verses in the Bible (supposing them to be true even though these men say much of the Bible is false), if these verses validly imply a conclusion, the conclusion may be false. This view and those who promulgate it are irrational. Validity is the characteristic of an argument by which the conclusion must be true whenever the premises are. These men say, the conclusion must be true, that is, the argument satisfies the laws of logic, but nevertheless it is false. It is true, but it is false. Crazy, isn’t it? Well, crazy or insane, in politer language it is called irrational.” – p. 54

There are five rules, easily remembers, by which the validity of any syllogistic argument may be tested almost instantaneously:

“If immediate inference has one premise, and the syllogism has two, there are others that have three or more. They are call sorites. As a matter of fat, they are not systematically important, for they are only a string of syllogisms condensed and tacked together.” (p. 86)

Disjunctive hypothetical syllogism (where + means “or”):

Finally, the book has a postscript on “God and Logic” (first published in the Trinity Review, November-December 1980) which is a must read to understand the ultimate purpose of logic and of learning logic.

What I believe to be the original cover is shown above. The version I own has this cover: 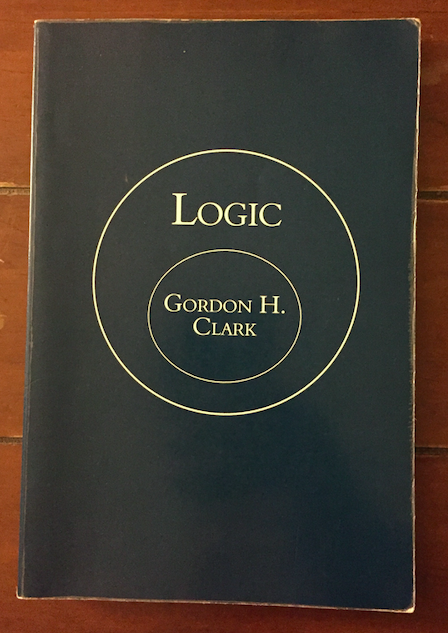