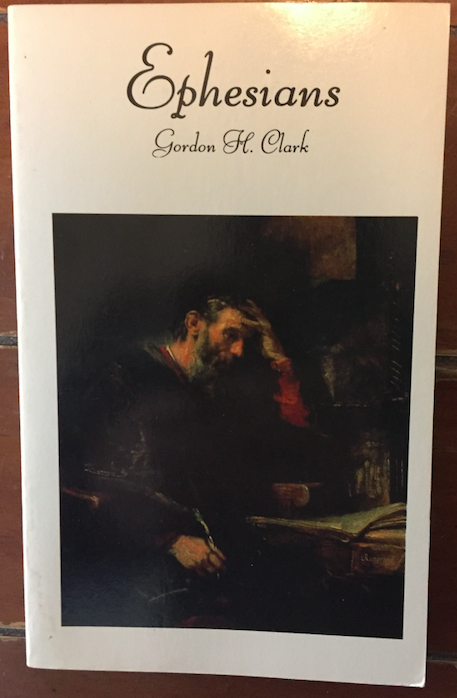 Though this commentary was published in 1985 (the year Clark died), he actually wrote the book in 1981, as evidenced in his correspondence from that year. The delay in publication stems from the fact that Clark had sent the manuscript to a couple publishers (Mott Media, and Presbyterian and Reformed) both of whom ended up not publishing it. By 1984 Clark had sent the manuscript to John Robbins who published it as a Trinity Foundation volume the next year.

This commentary, like others of Gordon Clark but perhaps even more so, frequently delves into the Greek grammar of the epistle. This is valuable if one is referencing and trying to understand a particular verse, but makes for difficult reading if one attempts to read the book straight through.

A few notable notes will be noted:

“It is not true that the oldest manuscripts are always the best. If the original X were copied in A.D. 110, and this copy were copied in A.D. 120, and so on to A.D. 200, there would be ten generations between the original and the final copy. Each step would incorporate an error or two. But suppose another copy was made directly from X in A.D. 210. This manuscript would be later than A.D. 200, but it would be only one step away from the original, not ten steps; and would therefore be better than the more ancient copy.” (p. 3)

“One Puritan writer includes in this nullification the civil laws of the ancient Jewish state—contemporary theonomists are not Puritan.” (p. 85)

An argument for cessationism:

And, while there are a number of other interesting comments in the book, perhaps one final one related to metaphysics is particular notable:

“The New Testament, on the contrary, and the Old as well, teach that the real world is not so much trees and rocks as it is soul, minds, and spirits.” (p. 205)