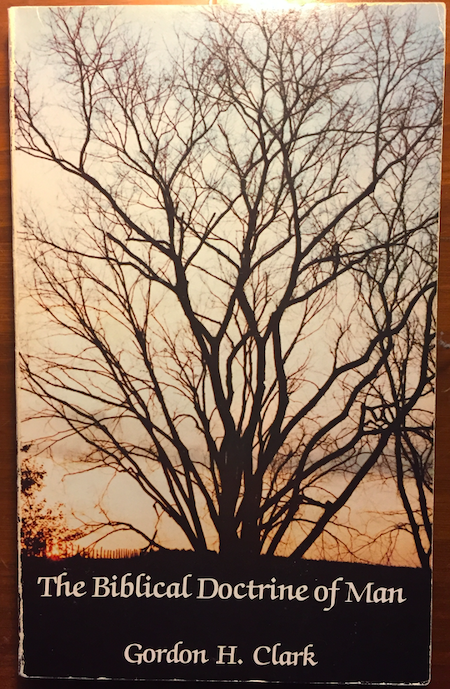 This book was first written as the chapter titled “Man” in Gordon Clark’s systematic theology, First Lessons in Theology. Seeing that it was ultimately published as a stand alone volume in 1984, it was published when Clark was still alive and thus clearly had his approval.

This volume is classic Clark and it is a nice relief from reading his sometimes tedious Biblical commentaries, some of which I’ve recently reviewed for this series. This might be one of his best books, though at times overlooked by some (including myself) because of its small size and late date of publication.

In the first chapter of The Biblical Doctrine of Man Clark defends the doctrine of creation. It is no surprise that he holds to creation over evolution.

The second chapter, on “The Image of God,” is a topic Clark emphasizes in his writings and it is critical to his theories. “The Bible,” he writes, “makes an immense distinction between man and animals.” (p. 5) “Man has a mind.” (p. 6) “God spoke to Adam and Adam understood what God told him.” (p. 7) “The image of God is not something man has, somewhere inside of him, or somewhere on the surface, as if God had first created man and then stamped him with a signet ring. No, the image is not something man has, man is the image. First Corinthians 11:7 pointedly says, ‘He [man] is the image and glory of God.’” (p. 9) Quoting various Scriptural verses, Clark argues that “the image of God, in which man was created is knowledge.” (p. 14) More exactly Clark writes, “The image must be reason.” (p. 16) “John 1:9 [That was the true Light, which lighteth every man that cometh into the world.] cannot be soteric because it refers to all men.” (p. 18) It seems to be epistemological. “The conclusion therefore is that creative light gives every many an innate knowledge sufficient to make all men responsible for their evil actions.” (p. 18)

Clark spends a number pages refuting behaviorism. In a particularly excellent paragraph he writes, “But their assertion is inconsistent with their fundamental principle. Man is physics and chemistry, is he? Well, if a chemist combines hydrogen, sulphur, and oxygen, in certain propositions, he will have sulphuric acid. And to keep the examples elementary, if he combines sodium and chlorine, he will get salt. But is salt any more “true” than sulphuric acid? Make the example more complex. If certain brains and muscles perform motions called behaviorism, are they any more true than my brains and muscles whose intricate reaction is called Christianity? Reduce thinking to chemistry and no distinction between truth and error remains. Behaviorism has committed the suicide of self-contradiction.” (p. 29)

Chapter 7 is on “Dichotomy and Trichotomy.” Trichotomy, Clark contends, was erroneously taught by a few in the early centuries of the church but died out and “remained in its tomb until resurrected in the nineteenth century.” (p. 35) John Gill is seen to hold to dichotomy and possible hadn’t even heard of trichotomy. (p. 37)

Chapter 8 then is on “Traducianism and Creationism.” This is, of course, not the “creationism” as in the creation of the world, but rather the question of whether souls are created with each human born into the world, or whether the souls, per traducianism, are not created but are produced from the souls of the parents. This is one of those topics that I first heard about when reading Clark. I guess you’d be unlikely to come across it in most other theologians. That’s one thing that makes reading Clark so much fun and so rewarding. Against Gill and A. A. Hodge, Clark concludes, among other points, “the specific statement that God rested from his work of creation renders incredible the notion that God issued many billions of creative fiats after the original creation week.” (p. 51)

Chapters on “Federal Headship,” Immediate Imputation,” and “Total Depravity” are solid defenses of the Calvinistic position on soteriology.

And, finally, in a passage surely disliked by some of today’s hyper-calvinistic-ish internet zealots, Clark explains total depravity with the distinction (shared by the Westminster Confession) that some sins are more heinous than others:

“In case some elementary students are unaware of it, and some secular professors too, one must inform them that the doctrine of total depravity does not mean that everyone is as sinful as it is possible to be. The word total in English can be used either extensively or intensively. The intensive or connotative idea is that man is so corrupt that his every act is as heinous as any act can be. The extensive or denotative sense is that all his thought, faculties, and activities, all of them, are to some degree or other affected by sin. In his totality he is indeed heading in the wrong direction, but only a few persons have actually descended to the lowest depths of their destination.” (p. 76)

There are so many excellent points in this volume that a review of it tends towards such a length that it is better simply to read the book itself.

3 thoughts on “GHC Review 34: The Biblical Doctrine of Man”