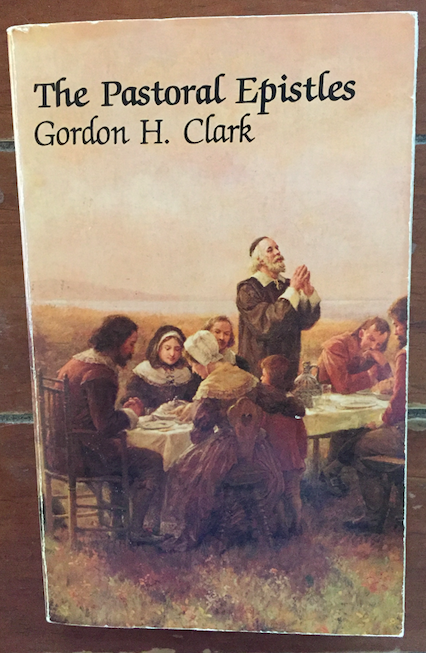 This is Clark’s commentary on 1 Timothy, 2 Timothy, and Titus with the addition of appendices on “The Ordination of Women” and “The Presbyterian Doctrine.” It is lengthier than his other commentaries, but it does cover three Biblical books.

For his commentary Clark regularly references a number of other commentators, some of whom are less than orthodox or even completely unbelievers. He challenges these critics where need be. But he also notes true difficulties in the text and translation; in at least one place (p. 111) even admitting his own ignorance to understanding. As the pastoral epistles clearly give direction on the ordination of elders (as men) the addition of the appendix critiquing women’s ordination is well-added in this volume.

Some of which caught my attention in reading this volume are the following:

1. “One of the strangest doctrines is that doctrine is not of much importance.” (p. 7)

2. “But Timothy commands the Ephesians to love. Love then is something volitional, not emotional.” (p. 12)

6. “As a college professor I think I shocked some younger colleagues by remarking that any professor who has to prepare for his classes is incompetent.” (p. 99)

7. Relevant to the discussion of Clark’s views on alcohol that I touched on in The Presbyterian Philosopher, here Clark notes, “But if our pollution [of the water] goes too far we may have to drink a little wine for our stomach’s sake. Since I don’t like the taste at all, I shall choose fruit juices.” (p. 103)

8. “Though the phrase ‘will of God’ sometimes refers to a precept, it would preclude the common confusion if we agree to denote the eternal decree as God’s will, and distinguish his commands as precepts. This accords with Romans 9:19: No one has ever resisted his will, but we all violate his precepts.” (p. 125)

9. “ordination is not a recognition of gifts previously possessed. This gift or charisma is the authority preach the gospel.” (p. 130)

10. “We are justified by faith alone; but we are regenerated without any previous faith or works; we are sanctified by faith and works; and we shall be glorified by neither.” (p. 133)

11. “Some of the writers speak as if the doctrine of inerrancy was the invention of Warfield and the old Princeton theologians. Such assertions derive from incompetent scholarship. … Quenstedt, a major Lutheran theologian of the seventeenth century, two hundred years before Warfield, wrote, ‘The canonical Holy Scriptures in the original text are the infallible truth and are free from every error.’” (p. 182)