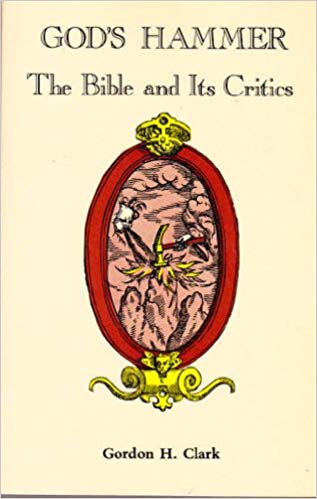 “Thank you for the copy of God’s Hammer. You are doing wonders. I may have some suggestions for future projects.” – GHC to John Robbins, March 9, 1982.

This volume, like all of Clark’s published with the Trinity Foundation, has a foreword by John Robbins. Technically—in this book only—Robbins’s part is called a preface. The foreword is written by Harold Lindsell.

As this is the only time where Lindsell contributes to one of Clark’s books this is a good opportunity to note some things about him. Harold Lindsell (1913 – 1998) had been a student of Clark’s at Wheaton College. He is most well known for his book The Battle for the Bible. I’ve found copies of this book in many places and seen it referenced in many writings which all leads me to think that the book sold extremely well. Lindsell’s path mirrored Carl Henry’s in many ways. They each were Baptists, each went to Wheaton, each taught at Fuller Seminary, and each were for a time editor of Christianity Today. If I recall correctly from Henry’s autobiography and the personal letters of his I’ve read, the two men did not get along with each other at Christianity Today, and this contributed to Henry’s departure. From all indications Lindsell always remained an orthodox believers; unlike many at Fuller that is. There is a large collection of Lindsell’s papers at the Billy Graham Center Archives, Wheaton College. A student should take them up and write a biography.

But we move on to God’s Hammer. This volume is a collection of eleven previously published articles of Dr. Clark’s. This is the first collection of his articles to be published. That it was published yet during Clark’s life shows his approval of it. The book focuses on the doctrine of Bible’s inerrancy. No wonder Lindsell was chosen to write the foreword.

The book is somewhat front-heavy. That is, the best essays are first and then it drags out a bit.

Chapter 1 – How Many I Know the Bible Is Inspired? (Originally in Can I Trust the Bible, ed. Howard Vos, Moody Press, 1963)

This is quite an excellent essay, and so I have chosen to quote from it at length.

The Bible itself claims to be inspired. II Timothy 3:16 reads “All scripture is given by inspiration of God, and is profitable for doctrine.” “The Greek word does not mean breathed into, it means breathed out.” Plenary inspiration is the idea that all of the Scripture is inspired. Clark cites John 10:35 and II Peter 1:20. “Jesus (Matt. 11:9-15) asserted that John the Baptist was a prophet and more than a prophet. He was superior to all the Old Testament prophets. Yet the prophet who was least in New Testament times was a greater prophet than John. It follows, doe sit not that the New Testament prophets were no less inspired than their forerunners.” (p. 7) “Paul commands the reading of his letters in the churches. … Here we have an example of the apostolic imposition of the New Testament Scriptures.” (p. 8)

The modernists said “the Bible contains the Word of God.” “But now, in the middle of the twentieth century modernism has become somewhat antiquated, and Neo-orthodoxy has taken its place. This movement has invented a new deceptive phrase. The Neo-orthodox people say that the bible is a record of God’s revelation.” (p. 11)

“If the reader already accepts the Bible as the Word of God, the question that forms the title of this chapter, “How May I know the Bible Is Inspired,” has been answered. But perhaps the ‘I’ in the title, a reader of this chapter, does not accept the Bible as the Word of God. Such a person will say ‘No doubt the Bible claims inspiration, but is the claim true?’ The question they becomes, How may one prove Biblical inspiration to an inquirer?” (p. 12)

“Either the Bible is a worthless fraud and Jesus was a deluded martyr, or the Bible is in truth the Word of God written.” (p. 13)

Clark then moves on to “The Testimony of the Holy Spirit.” “Conclusions follow automatically; but what makes a man accept an initial proposition? Calvin’s answer is plain: belief in the Scripture ‘cannot be produced but by a revelation from heaven.’” (p. 17) “Peter had had neither trance nor vision, no had he heard an audible voice. In modern American slang we would say, it just ‘dawned’ on him. What happened was that the Spirit produced this conviction in Peter’s mind.” (p. 18)

“Christianity is often repudiated on the ground that it is circular: the Bible is authoritative because the Bible authoritatively says so. But this objection applies no more to Christianity than to any philosophic system or even to geometry. Every system of organized propositions depends of necessity on some indemonstrable premises, and every system must make an attempt to explain how these primary premises come to be accepted.” (p. 19)

It is “impossible by argument or preaching alone to cause anyone to believe the Bible. Only God can cause such belief.” (p. 20) But, “the witness or testimony of the Holy Spirit is a witness to something. The Spirit witnesses to the authority of the Scriptures. If no apostle or preacher expounded the message, there would be nothing in the sinner’s mind for the Spirit to witness to.” (p. 21)

“In the last analysis, therefore, although historical and archaeological confirmation of the Bible’s accuracy is of great interest to us and of great embarrassment to unbelievers, a conviction that the Bible is really the Word of God cannot be the conclusion of a valid argument based on more clearly evident premises. The conviction is produced by the Holy Spirit himself.” (p. 23)

This essay is Clark’s final foray in the Clark – Van Til Controversy. And so it is in this light that Clark continues from the previous quote saying “In fact, this is so elementary that it might appear incredible that any conservative theologian would deny it. Yet there are some professed conservatives who deny it explicitly and others who, without denying it explicitly, undermine and vitiate it by other assertions.” (p. 26) The next few pages that follow contain a critique of the epistemological errors of Van Til and his colleagues at Westminster Theological Seminary. Clark concludes that they “are confused and are attempting to combine two incompatible positions.” And, “the objectionable one is in substantial harmony with existentialism or neo-orthodoxy.” (p. 29)

To the contention of controversy itself that between man’s knowledge and God’s knowledge there is no point of coincidence, Clark responds, “But if both God and man know, there must with the differences be at least one point of similarity; for if there were no point of similarity, it would be inappropriate to use the one term knowledge in both cases.” (p. 31) Clark then argues that theories of analogy, “whether found in Thomas Aquinas, Emil Brunner, or professed conservatives, is unrelieved skepticism and is incompatible with the acceptance of divine revelation as truth.” (p. 34)

Clark then moves on to his own view in a section on “Truth is Propositional.” There he says, “The Bible nowhere suggests that there are any inexpressible truths.” (p. 34) “It may be that the phrase nonpropositional truth is a phrase without meaning.” (p. 35)

Clark begins this essay by noting that in 1840 the Swiss theologian Louis Gaussen published Theopneustia, on the inspiration of the Scriptures. I’ve heard people claim inerrancy was a late 19th century American invention. The claim is made without any knowledge of Gaussen, or much knowledge at all. Clark then moves on to dispatch “the dictation objection” and “contemporary theories” while contending for the necessity of logic; the law of contradiction.

Clark notes Dewey Beegle’s objection that “verbal inspiration relies on a few proof texts instead of following the true scientific method of induction from the Biblical phenomena.” (p. 53-54). In response, Clark notes that the doctrine relies on many texts and he rejects the contrast made between the two approaches. Clark also responds to comments made in a person’s letter of resignation from the society.

“The existence of divergent concepts of God, of moral ideals, and above all of schemes of salvation show the power of sin in the mind of man; but they also show the inherent inadequacy of general revelation.” (p. 65) “The planets above and the plants below show some of the wisdom and power of God; that is to say, they show it to those who already believe that God has created them.” (p. 65)

Clark then proceeds to a defense of revelation as rational, first surveying the various definitions of faith and reason and their relationships given in history. A similar undertaking was made in Clark’s Religion, Reason, and Revelation. The present chapter however goes further into explaining and critiquing neo-orthodoxy. The remainder of the chapter argues similar to Language and Theology that language is capable of conveying literal truths.

Though not a bad article, the overlap in content of the articles in this volume leaves me with little to comment on that hasn’t already been noted. Here Clark does speak more about neo-orthodoxy; particular Emil Brunner.

This short chapter is a response to an article written by four professors of PCUSA seminaries who argued against inerrancy. Clarks main point, in contrast to the professors, is that we do in fact need an infallible Bible.

Chapter 8 – The Concept of Biblical Authority

This chapter is copied from a previously published short pamphlet which I have reviewed here.

Chapter 9 – Hamilton’s Theory of Language and Inspiration (Journal of the Evangelical Theological Society, 1972)

Clark had previously devoted a chapter to Hamilton in Language and Theology. Here he returns with an additional critique.

Continuing on with the topic of inerrancy, this article pits the view of Clark and Carl Henry against that of James Daane and (Daniel?) Fuller who teach that the Bible is sometimes false. Daane was opponent of Cornelius Van Til’s as well. Van Til even wrote a volume against him.

Clark argues that he and Henry have a clear view of truth which Daane rejects, but that Daane “nowhere describes the form of truth he defends.” (p. 176) So I don’t suppose Daane’s theory is very enticing since it doesn’t appear that he has a theory.

The perennial problem with non-inerrancy supporters arises again; “if the Bible makes false assertions, there must be a criterion independent of and superior to the Bible by which its assertions must be judged.” (p. 182) Clark writes, “We challenge our opponents to state their epistemological criterion.” I don’t know that they have ever responded. Nor have I see any ant-inerrancy proponent respond to that question.

Chapter 11 – The Reformed Faith and The Westminster Confession (An address delivered at Weaverville, North Carolina on August 17, 1955. The Southern Presbyterian Journal Sep. 7. 7–12.)

Weaverville is not far from my present home. In fact, back even before Clark spoke there at the 1955 Weaverville Conference, the pastor of the Presbyterian Church there, Henry Dendy, had also pastored the church where I am currently assistant pastor. Dendy also was the editor for the Southern Presbyterian Journal which ran a number of Clark’s articles.

Clark notes, “Metaphorically the first chapter of the Westminster Confession is a continental divide.” (p. 187) Though other views are noted and critiqued, this essay again focuses on the error of neo-orthodoxy.

The original cover is shown above. The version I have has this cover which about maximized the space allotted to a picture of an actual hammer. 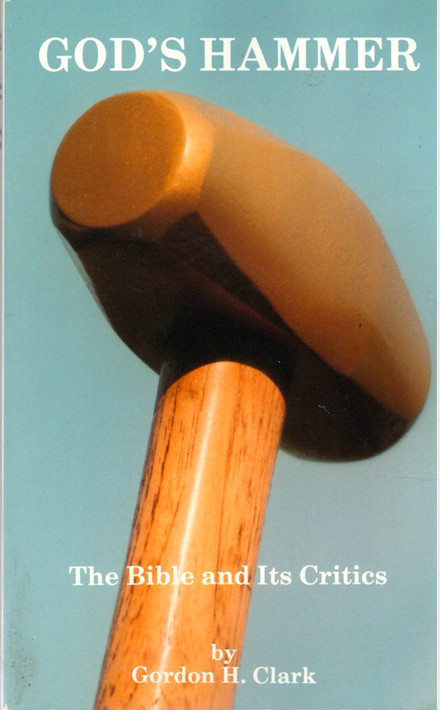