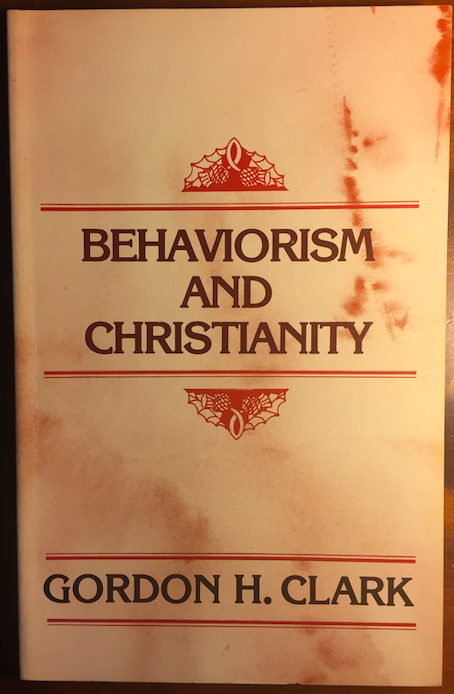 The writing of this volume started around the time of March 22, 1979 when Gordon Clark wrote to his friend Howard Long saying, “As for the future, one subject I am considering is Behaviorism. So many students come to Covenant [College] already inclined to behavioristic views. The psychology department does not do much in disabusing them. Probably matters are worse elsewhere. But to write a monograph on this will take a year or more.”

In only half that time—exactly six months later—Clark had nearly finished writing the book. He wrote to Garrett Johnson on September 22, 1979 saying, “My monograph on Behaviorism needs only a few more pages typed + I’ll be sending it off – this month I hope.”

Before the book was published Clark noted to John Robbins (on March 18, 1980), “Another matter. I gave a ‘popular’ lecture on Behaviorism at Kennedy’s church in Ft. Lauderdale. I asked if they wanted to publish it. They gave me an affirmative answer, but not too emphatic. Perhaps you could question them on cooperation. The lecture is a summary of the monograph, simplified, and of course shortened. I judge it is about 5000 words because it took about 50 minutes to deliver.”

Robbins returned to this question (on August 1, 1980) writing to Clark “I have also received the lecture on behaviorism, and it will have to be cut by one-third in order to fit the Review. I will be sending an edited copy for your approval before we publish.” This became Clark’s article “Mindless Men: Behaviorism and Christianity” in the July-August 1980 issue of the Trinity Review.

Clark worked on getting the book published with Presbyterian and Reformed, but ultimately asked John Robbins to have the Trinity Foundation publish it. He wrote to Robbins (no month or day listed, 1981) saying: “Craig [Presbyterian and Reformed] delays interminably on my Behaviorism MS. Have you some idea how much it would cost to publish it? I could make some contribution and perhaps you could raise money for a special project.”

So much for the history of the volume. Now we must move on to its content.

The chapters on the secular positions of John B. Watson, Edgar A. Singer Jr., Gilbert Ryle, and B. F. Skinner are more difficult than average for Clark’s writings. They seem to be written for a more philosophical audience. Singer was a professor of Clark’s at Penn, and Clark thinks Singer’s understanding is better than the rest. I might add also that B. F. Skinner is notable for being the namesake of the Simpson’s Principle Skinner. But whether he too was an advocate of steamed hams I do not know.

In chapter six Clark comes to Donald M. MacKay who tries to gives Behaviorism a Christian blessing. To this Clark writes, “There is no such thing as Christian behaviorism for the same reason that there is no such thing as Arminian Calvinism or Augustinian Pelagianism.” (p. 81) Clark notes that Intervarsity published a volume of MacKay’s promoting his unbiblical theory. MacKay “thinks there are data, hard, given facts, uncontaminated by intellectual interpretation.” (p. 83) Naturally this conflicts with Clark’s presuppositionalism. And in a quote that perhaps summarizes Clark’s entire philosophy he notes, “Christianity is not based on empirical observations, but on the propositional revelation of divine truth.” (p. 83) MacKay’s behaviorism is mechanistic and there is no place in it for the Biblical teaching of the spirit or soul. Fortunately MacKay’s theory never seems to have taken off. I, for one, have never encountered a self-described “Christian Behaviorist.” If I do, I’ll return to this book for advice.