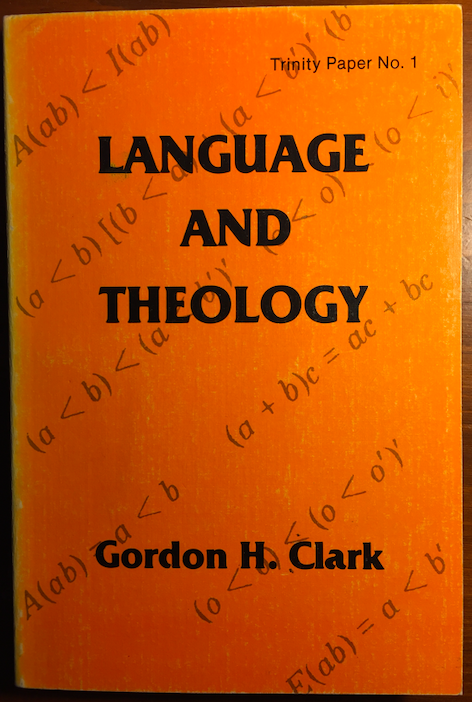 This is the single ugliest book cover I own. I’m frankly not sure how to describe the color. Perhaps “blinding orange.” But if any book should not be judged by its cover it is this one, for while the cover is hideous the contents are quite excellent.

A main thesis of Language and Theology is that human language is adequate to express truth under a Christian framework. Before presenting a “Christian Construction” in the final chapter, Clark surveys the field of language philosophy with chapters on Russell, Wittgenstein, Carnap, Ayer, Feigl, Wittgenstein (II), Urban, Mascall, Bushnell, Gilkey, Hordern, and Hamilton. But it is Clark’s “Christian Construction” that is of particular note.
Just before the final chapter there is an important, constructive comment:

“Surely language, as God’s gift to Adam, has as its purpose, not only communication among men, but communication between man and God. God spoke words to Adam and Adam spoke words to God Since this is the divine intention, words or language are adequate. To be sure, on occasion, even on frequent occasions, sinful man cannot find the right words to express his thought; but this is a defect of man, not an inadequacy of language.” (p. 130.)

While I’m tempted to next quote the entire final chapter, perhaps a considerable amount of value is found in just these few quotes:

“Throughout the Bible as a whole the rational God gives man an intelligible message.” (p. 138)
“God gave Adam a mind to understand the divine law, and he gave him language to enable him to speak to God. From the beginning language was intended for worship.” (p. 138)
“[Augustine’s] solution was, briefly, not that two minds have the same sensations, but that two minds have the same ideas. The ideas are common because Christ is the Logos that lighteth every man that comes into the world.” (p. 142)
“St. Augustine, though he altered his views as he grew older, gave a different role to sensation; without too much distortion one might call it a stimulus to intellectual intuition.” (p. 144)
“Language is a bearer of meaning because words are arbitrary signs the mind uses to tag thought.” (p. 152)

Much of Clark’s view in Language and Theology was already developed in two articles (“Logic and Language” and “Language and Logic”) over two decades previous to the book.

Clark’s view of language would make an excellent topic for a student to write on. Language and Theology might also have some bearing on Clark’s view of hermeneutics.