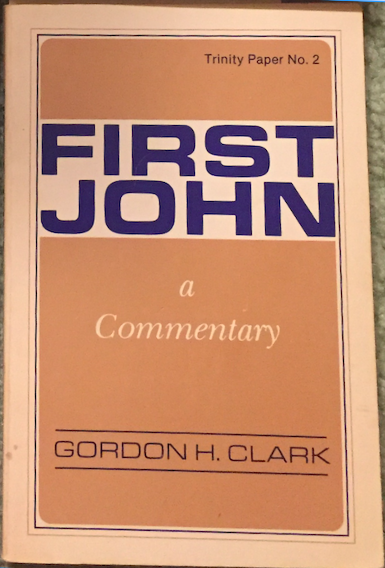 This volume, along with Language and Theology, were the first of Dr. Clark’s to be originally published by the Trinity Foundation. They both came out in 1980 with Language and Theology given the honor of being labeled “Trinity Paper #1.” First John had to settle for second place as “Trinity Paper #2.” Up to this point Clark had had most of his books (nineteen of them) published by the Presbyterian and Reformed Publishing Company. (He also had published four books with F. S. Crofts and two with Eerdmans.) From this point forward all but three of his books would be published by the Trinity Foundation. (The exceptions are that two more would come out with Presbyterian and Reformed and one with Mott Media.)

Clark had had a lot of frustration with publishers through the years. On one occasion a publisher kept one of his manuscripts for over a year before opting not to publish it. In other instances publishers would ask for significant changes to the manuscripts. And so when John Robbins came with the proposal to publish Dr. Clark’s books through the Trinity Foundation it was a welcome relief to him; a way to avoid the hassle of the bigger publishing firms.

Robbins’s dedicated efforts meant that at least two books of Dr. Clark’s would be published in each year from 1982 to 1987. This was vital to getting published valuable additions to the corpus of Dr. Clark’s writings and thereby more thoroughly detailing his philosophy.

But we must return to the subject at hand, reviewing First John. Again this cannot be a very thorough review as such a review would rival the book itself in length. Only some highlights will be noted.

Clark notes A. W. Pink as “a widely known commentator, and among strict evangelicals well esteemed.” (p. 11) Though he may reference Pink elsewhere in his writings this book contains the only references to him that come to my mind. Here Clark has made a mistake though in saying that Pink published a book on First John “in 1865 or thereabouts.” Pink’s years were 1886 – 1952.

Clark argues that the logos of 1 John chapter 1 refers to both Jesus and the message he preached. (pp. 9-19) In this Clark mentions something he’ll later elaborate on in The Incarnation—his definition of person: “A person is his mind. A person is his thoughts.” (p. 18) Connecting back to the original point, Clark writes, “Christ, too, is his mind, of which the gospel message is part. God is a spirit, an intelligence, a mind: God is truth, and the message is part of that truth.” (p. 18-19)

On pages 44-48 Clark explains the difference between propitiation and expiation and why it is important. Following this, and in the midst of making additional points, Clark calls John Gill “the greatest Baptist theologian.” (p. 49)

On page 70-71 Clark has a short excursion into economics. There, in saying, “the economic fact is that all nations get rich together or get poor together” he may have David Ricardo’s law of comparative advantage in mind.

Clark makes the point that “the worst enemies [of the church of God] are to be found in the church organization.” He gives a number of historical examples of the church being strong through external oppression, and then notes that “Princeton Seminary and Fuller, as others, were corrupted within.” (p. 75) Princeton had gone liberal in the 1920s and neo-orthodox within a few decades later. A number of former Clark students had taught at Fuller in the 1950s through 1970s, but that school too went neo-orthodox. Clark’s The Concept of Biblical Authority which came out the year before First John was written in opposition to a number of Fuller Seminary professors who were contending against Biblical inerrancy.

A number of definitions are given in this commentary. Though not itself a complete definition Clark writes of the Gospel that “a most important part” is that “Christ has come in the flesh.” The good news also “includes Christ’s propitiation of the Father. (p. 83) Then on “eternal life” Clark writes, “Jesus in his High Priestly prayer said, ‘This is life eternal, that they should know Thee, the only true God, and Jesus Christ, whom Thou hast sent’ (John 17:3). If any verse defines eternal life, this is it. Eternal life is knowledge of the Father and the Son.” (p. 84)

More generally this volume focuses on themes present in 1 John including, but not limited to, truth, knowledge, and assurance. There are bits of Clark’s epistemology showing through, but the book is not a detailed account of it. Overall there are a considerable number of important points made in this volume, though I might suggest finding a more general commentary if you’re preparing sermons on the epistle.

Below is a review of First John from The Presbyterian Journal and a picture of the 2nd edition cover. 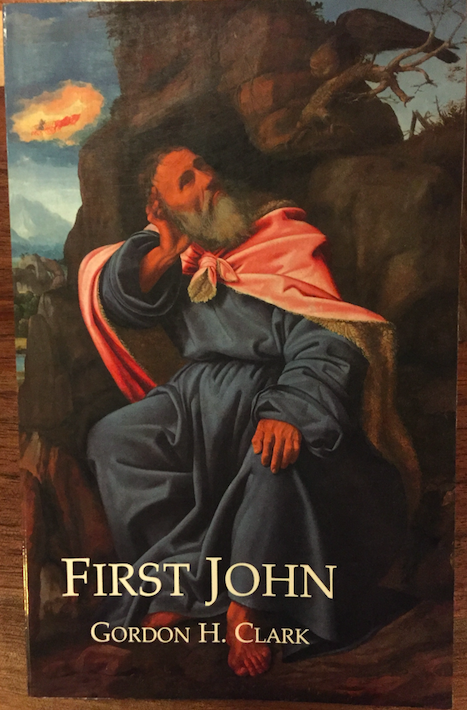