A frequent contention Cornelius Van Til made against Gordon Clark was that the latter’s theology is in some way based on “Greek specifications.”
Though this precise contention is not made in the official Complaint against Clark’s ordination, it does appear in a letter of Van Til’s from the time of the Clark – Van Til controversy. On December 17, 1945 Van Til wrote to Charles Stanton saying, “Clark’s position therefore involves the rejection of the Reformed concept of God’s revelation to man and a reduction of it to Greek specifications.” Van Til’s biographer John Muether noted the same contention when he wrote, “Further conversations confirmed for Van Til his suspicion that Clark’s thought was deeply grounded in Greek philosophy; Van Til summed up Clark’s position in the Socratic motto that ‘knowledge is virtue’.” (John Muether, Cornelius Van Til, Reformed Apologist and Churchman, P&R, 2008, p. 102)
But what precisely was Van Til’s contention? The Greeks surely were not uniform in their thought. What “Greek specifications” is he referring to? Which Greek? Aristotle? Plato? Plotinus? Someone else? The New Testament was written in Greek, but Van Til certainly isn’t contending that Clark’s position is Biblical.
Some light might be shed on this question in a letter of Van Til to R. J. Rushdoony of December 18, 1959 where he wrote, “I was interested in the remark that you made with respect to correspondence on the subject of your book with Dr. Gordon H. Clark. I have no doubt that he tackled the problem of analogy. He has never been able to free himself of the incubus of Greek thinking. This was clearly apparent in the article in [he?, typo] wrote on the ‘Primacy of the Intellect’ in the Westminster Theological Journal, as well as other writings. It would be wonderful if you could persuade him to see things a little differently.” 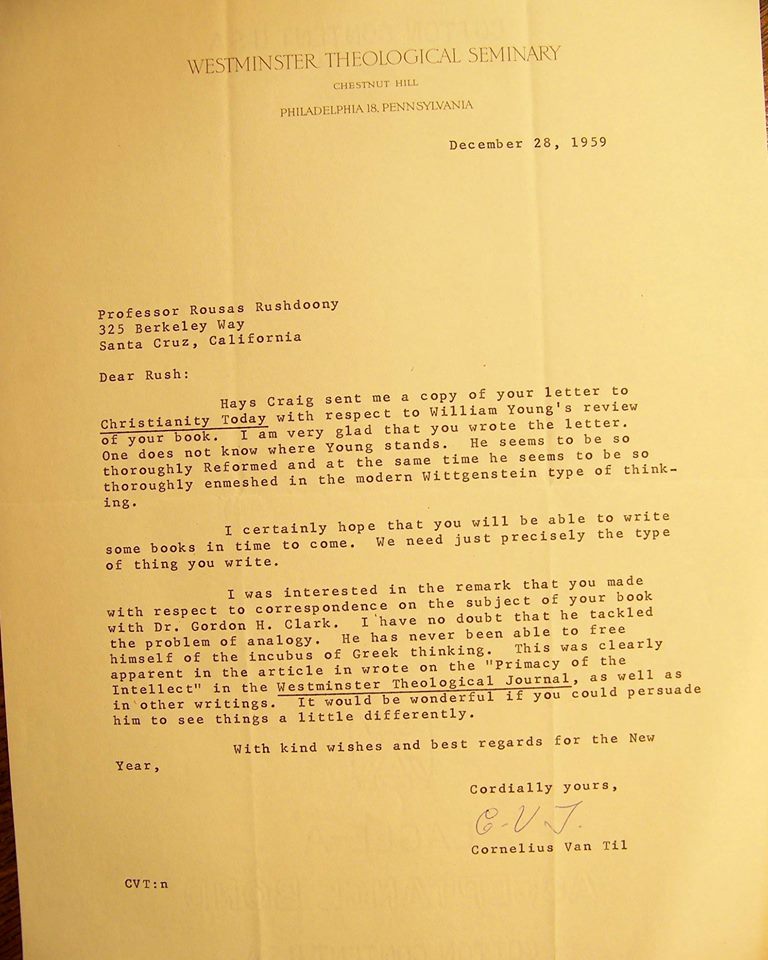 Here Van Til does not specify what his “Greek thinking” contention against Clark is, but he does at least refer to one disputed article.
Clark’s article “On the Primacy of the Intellect” was published in the Westminster Theological Journal in May 1943. It was one of the major documents under consideration in The Complaint against his ordination. Van Til mentions this article also in a letter of July 2, 1944 to Calvin Knox Cummings. There Van Til wrote, “Just before presbytery meeting of last spring Clark and I spent about two hours together at my house. I tried as several times before to show him that his article on the primacy of the intellect failed to make the distinction between the creator and creature fundamental. He dismissed the whole matter.”
So one problem Van Til had with Clark’s article was that it “failed to make the distinction between the creator and creature fundamental.” But when The Complaint comes to this same article of Clark’s its most repeated point of argument is opposition to Clark’s denial of God having emotions. And there is Muether’s note that the problem was that Clark held that “knowledge is virtue.”
I am left thinking one can only speculate what Van Til’s contention really was when it comes to “Greek specifications.” Probably all of the points brought up in The Complaint relate to the contention in some way. Clark’s entire system was then in view. Saying Clark’s views are “Greek” (but not providing clear arguments as to the case) is a good example of what the logicians call “poisoning the well.”

2 thoughts on “Clark – Van Til and "Greek Specifications"”