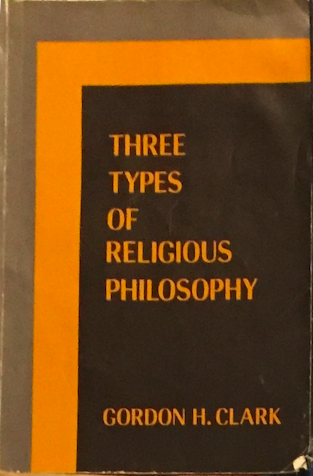 Gordon Clark’s Three Types of Religious Philosophy discusses Rationalism, Empiricism, Irrationalism, and Dogmatism. To be true to the title then, one might wonder which of the four sections doesn’t make the cut to be considered a religious philosophy? The answer is Irrationalism which, though a “widely held point of view,” “is neither a method nor a philosophy.” (p. 4.)

Chapter 1 – Introduction
In the introduction Clark defines dogmatism as “that method of procedure which tries to systematize beliefs concerning God, science, immorality, etc. on the basis of information divinely revealed in the sacred writings.” (p. 8) And, he contends, “Dogmatism does not conflict with truth from other sources because there are no other sources of truth.” (p. 9) Rationalism is “the theory that all knowledge, and therefore all religious knowledge, can be deduced from logic alone, i.e. logic apart from both revelation and sensory experience.” (p. 10) “The strict form of empiricism bases all knowledge on sensation alone.” (p. 24) “Should we begin by assuming the authority of sensation, the authority of logic, or the authority of God? The problem is how to start. What method shall we choose? Shall our method be dogmatism, rationalism, or empiricism?” (p. 25)

Chapter 2 – Rationalism
In his chapter on Rationalism, Clark discusses Augustine and Anselm, though he admits, both here and in the introduction, neither of these to be pure rationalists. Skepticism held sway for a number of centuries. Against it, knowledge must be shown to be possible. “Augustine starts explicitly with logic.” (p. 30) He “pushes still further” holding “that the norms of morality were also known and certain.” (p. 31) “Everyone desires happiness and the philosopher by his actions shows that happiness resides in the truth. The skeptic, etymologically, is a seeker of truth.” (p. 31) “The skeptic is refuted by the moral quality of his own actions.” (p. 31) “Anselm tried to improve on Augustine” (p. 33) and gave the ontological argument. Kant critiqued Anselm’s argument.

Clark’s conclusion on the whole discussion is instructive:

“Suppose deny that there are any existential judgments. Although this may sound insane to some philosophers who are very much enamored of existential propositions, there is a fairly decent argument to support the contention. It is this: If a predicate can be attached to everything without exception, it has no distinct meaning, and this is to say that it has no meaning at all. If a house is mur, and a cat ismur, and a boat, a mountain, a word, a dream, are mur, and if beauty and justice are mur, and the square root of minus one as well as aleph null, it begins to become clear that murhas no meaning. The judgement that a house is tall makes sense only because cats and some other things are not tall. If beauty and justice are norms, the assertion makes sense only because some subjects are not norms. That is to say, a predicate that attaches to everything without exception has no meaning. Here then is the conclusion: The predicate existence can be attached to everything real or imaginary without exception. Dreams exists, mirages exist, the square root of minus one exists. … Of course God exists. Anything exists, so far as the term has any faint meaning at all. But it makes a great difference whether God is a dream, a mirage, or the square root of minus one. Spinoza did not need to prove that God exists. His important point was that God is the universe. But if God is not the universe, if, contrariwise, God is the Creator and Judge of all mankind, then we are dealing with substantial questions instead of non-sense syllables like existence.” (p. 43-44)

Chapter III – Empiricism
This chapter covers Aristotle, Aquinas, Paley, and Hume. Rather than the ontological argument of the Rationalists, these Empiricists emphasize the Cosmological Argument. “Unlike Augustine Thomas does not admit innate ideas or intellectual intuitions. All knowledge must be abstracted out of sensations.” (p. 60-61) Clark provides a number of criticisms of the Cosmological Argument arguing that it is invalid.
Paley’s watchmaker argument is called the teleological argument. “The basic criticisms,” writes Clark, “of the cosmological argument retain their force, no mater in what form it is stated. Even the more developed form of the teleological argument is equally based on experience.” (p. 65) Hume argues against all arguments for God based on experience. Hume writes, “If the cause be known only by the effect, we never ought to ascribe to it any qualities beyond what are precisely requisite to produce the effect.” (p. 66)
“Thomas and Hume, for all their differences in conclusions, agreed that all knowledge is based on sensation.” (p. 70) Many though, like the Greek skeptics, do not believe knowledge is attainable via sensation. “These criticisms [of the Greeks and others] utterly demolish empiricism and all arguments similar to those of Thomas Aquinas and William Paley.” (p. 75)

Though it is an unpopular conclusion, Clark admits, no one can make any progress until the futility of sensation is admitted. (p. 91)

Chapter IV – Irrationalism
Irrationalism “began as a reaction against Hegel’s rationalism.” (p. 93) After giving a brief history of philosophyh from Hume to Hegel, Clark moves on to Soren Kierkegaard who severs Christianity from historical events. “Kierkegaard is as dialectical, as relativistic, and as skeptical as he believes Hegel is. The ridicule consists in this: Hegel thought he was objective; Kierkegaard openly accepts irrationalism.” (p. 99)
“Here let us pause to catch our breath. The argument on historical research is acutely embarrassing to that type of (Lutheran) Apologetics and Prolegomena that tires to prove various Christian theses by archaeology or historical investigation. It is impossible by historical methods to prove beyond all doubt that Jesus was crucified. Even if the crucifixion by probably (though what probability means is not easily explained), empirical history could never prove that his death was a propitiatory sacrifice. And without this latter belief the former cannot save. But such difficulties as these do not embarrass any Christian who rejects empirical methodology.” (p. 100)

“Kierkegaard proposes subjectivity, faith, and infinite passion.” (p. 102) Kierkegaard’s view of faith is far from that of intellectual belief in Biblical propositions. It is rather, “the objective uncertainty due to the repulsion of the absurd held by the passion of inwardness … intensified to the utmost degree.” (p. 102) Kierkegaard “means precisely that the [Christian] doctrines are self-contradictory, therefore meaningless, therefore absurd.” (p 104) Faith, for Kierkegaard, believes contradictories. “Rather obviously Kierkegaard is not the spokesman for Christianity. Who in the whole history of the church ever believed these two contradictories [that God became man and that God cannot become man]? Where in the Bible are they asserted.” (p. 106) “What Kierkegaard means by faith is totally at variance with the Christian meaning of faith. The reason Christians do not believe contradictories is that no one can.” (p. 106) Kierkegaard’s views, so argues Clark, greatly influence Karl Barth and Emil Brunner. Their fatal flaw is the rejection of logic. “When once a man commits himself to contradictions, his language, and therefore his recommendations to other people, become meaningless.” (p. 114)

Chapter V – Dogmatism
Since “rationalism and empiricism, no less than irrationalism, are incapable of providing a system to make life worth while,” “to escape suicide, what else is there but dogmatism?” (p. 116)
“There must be first principles. A system cannot start unless it starts. The start is first. Therefore no one, since all must start somewhere, can consistently refuse permission to the dogmatist to start were he chooses.” (p. 120)

There is a similarity between rationalism and dogmatism in that they are forms of realism. “Thought and therefore intelligent conversation require something other than nominalistic proper nouns.” (p. 122) “To be sure, Christian dogmatism does not accept the unaltered World of Platonic Ideas. The Philonic interpretation is better. Still better is the replacement of Ideas (minus predicates) by propositions or truths.” (p. 122-123) “There are of course other thoughts, objects, or realities. Every Biblical proposition is one. These never change not go out of existence, for they are constituents of God’s mind. Knowing them we know God. To know God, we do not pass from an unreal concept abstracted from sensory experience to a different reality. We know God directly, for in him we live and move and have out being.” (p. 123)

What follows is a lengthy critique of John Warwick Montgomery and his empiricism. “He must hold that sensory experience is more reliable than a divinely given revelation.” (p. 132)

“Why does anyone choose the Bible rather than the Koran?” “The answer is that faith is the gift of God. As Psalm 65:4 says, God chooses a man and causes him to accept Christian dogmatism. Conversely, the Apostle John informs us that the Pharisees could not believe because God had blinded their eyes and hardened their hearts.” Clark here, in my opinion, is really answering the wrong question. People don’t want to know so much why a person chooses Christianity over Islam. The question is why SHOULD a person choose Christianity of Islam. This answer is found in Clark’s second Wheaton Lecture: Christianity should be chosen because it results in a superior system.

The original cover of the book is shown above. The second edition cover looks like this: 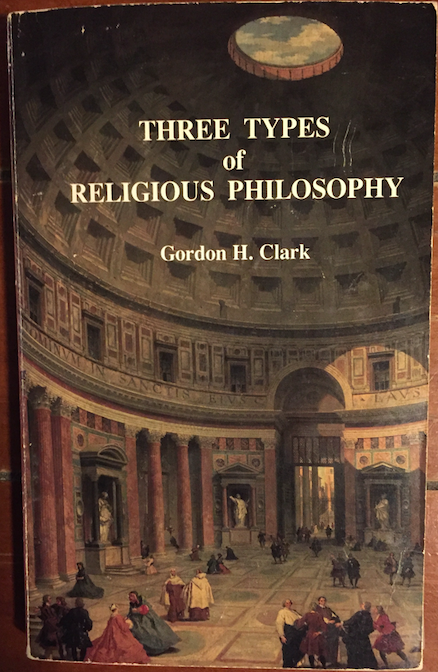