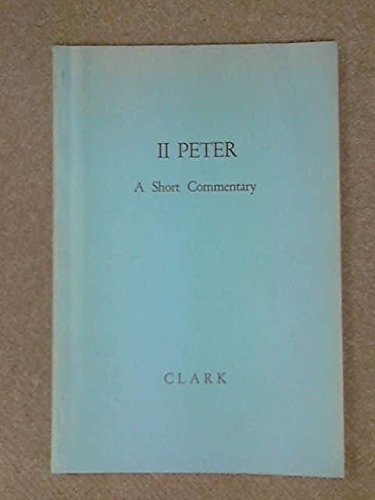 II Peter, A Short Commentary, by Gordon H. Clark, Nutley, NJ: Presbyterian and Reformed, 1972.
[Page references in this review will be from New Heavens, New Earth, the later revised edition of Clark’s commentaries on 1 and 2 Peter]

This is a detailed commentary on the short epistle of Second Peter. In it (so it seems to me) Clark is more focused on grammar than in his other commentaries. Clark also emphasizes the theme of “knowledge” in the epistle. He sums up Second Peter saying, “the Apostle Peter desires an increase in divine knowledge for those to whom God has sovereignly allotted faith in righteousness of Christ, himself God, that they may receive many additional blessings of grace and peace.” (p. 173)

Clark argues that II Peter 1:20 should be translated as “No written prophecy ever came into being by any individual’s setting it free [or, more literally] by private release. Because …,” etc. He continues, “Peter is asserting the complete absence of human initiative in revelation. Revelation is initiated by God.” (p. 193)

In chapter two he discusses the close similarities between Second Peter and Jude, concluding that there is no good reason to think either of the letters are spurious. Rather, he argues, it is possible that Peter and Jude had discussed together the topic at hand and come to some agreement in thought and even wording before each writing their letters.

On II Peter 3:9 Clark explains “Peter is therefore saying simply that Christ will not return until every one of the elect has come to repentance.” (p. 232)

On II Peter 3:13 he writes, “Peter’s conflagration results in a heavenly and earthly home of righteousness. This is not Stoic. It comes from Isaiah.” (p. 234)

Regarding Peter’s emphasis on knowledge, “Contemporary popular Christianity, both the semi-modernists and the ‘New-evangelicals,’ has seriously ignored Peter’s exhortation. They have fallen off their foundation and are carried away with various wicked errors.” (p. 238) This is solid evidence that Clark did not consider himself to be among the New-evangelicals, even if some of his former students had led the movement.
Clark concludes, “Will this perverse generation heed the apostle and studying grow in grace and knowledge of our Lord?” 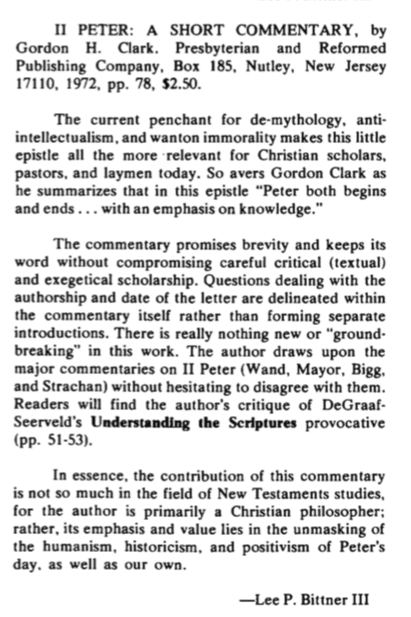