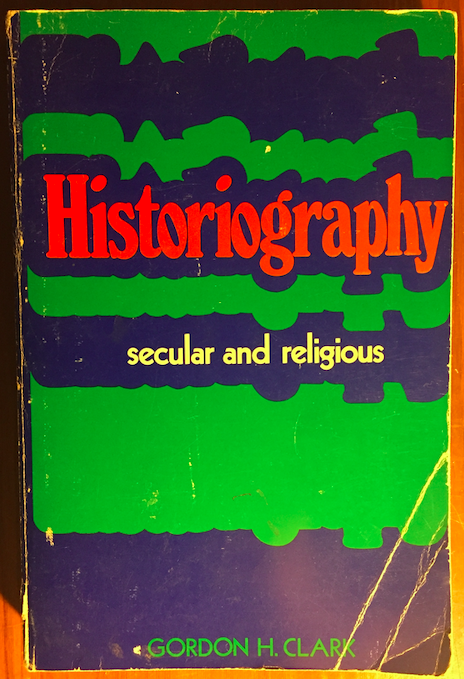 I must admit that this book makes for rather tedious reading. It might be of some value for studying Clark’s views on a particular thinker, be it Barth, Bultman, Collingwood, Cullman, or one of the many others he discusses in this volume. But for someone rather novice in the discussion of historiography, as I am, the sweep over so many viewpoints easily becomes overwhelming.

I also have to think that this is among the least commonly read of Clark’s books. It is dense, and not as often discussed as most of his other works. Even a summary of the book would be lengthy. So I have opted to review it only in giving some brief comments.

Of the secular theories, Clark’s comments on Marxism are the most interesting. He is brutal on Marx and his communist followers. He writes, “Marx had the incredibly stupid idea that ‘constant capital,’ i.e., the land, buildings, machinery, and raw materials, are not factors in production.” (p. 83) and, “That an army of bureaucrats would eat up more of the profits than capitalists ever did never occurred to Marx’s one track mind.” (p. 84) “The communists, though they can orbit the earth, cannot raise wheat.” (p. 90) “From the chief theoretician of the communist party in the United States an undisillusioned student expects something fairly calm and intelligible. But it turns out otherwise.” (p. 98) “From the Manifesto to Khrushchev to Mao enormities of illogical propaganda are normal procedure. Neurotic, self-alienation is its best defense.” (p. 99) Ultimately “Marxism fails to explain history concretely and in detail.” (p. 105) “When it comes to the details of history, their vaunted scientific methods leaven them silent.” (p. 105) “Marx and his followers are a disgrace to the profession.” (p. 108) In a later chapter Clark writes, “from Marx on, the theory [of Marxism] is torn between a desire to be scientifically neutral and an overwhelming hatred of people who hold lucrative positions.” (p. 180) And in yet another chapter, “It was his [Walter Rauschenbusch’s] opinion that the Christian faith demands the establishment of a socialistic or even Marxian society. This could not be guessed from the Biblical accounts of Abraham and Job, nor from the hard money policy of the Mosaic law, nor even from the New Testament account of the rich young ruler, and certainly not from the example of Christ and the apostles. But Rauschenbusch, in company with the other modernists of his day, determined the contents of the ‘Christian’ faith by the method of arbitrary selection.” (p. 264)

Of the religious theories it is Augustine who Clark most likes. “Augustine notes that the Hebrew-Christian religion understands history in terms of the City of God and its conflict with the earthly city.” (p. 233) History is a linear scheme; not a cyclical construction like some pagans have devised. “There are therefore two cities in the world, whose interaction, competition, and antagonism produce history. The human race remains a biological unity, for whatever that is worth, but its spiritual unity is forever broken. God remains the Creator of all, but he does not remain the Father of all, for one part of mankind have become children of the devil.” (p. 235) “Whereas mankind is divided into so many nations … yet there are but two sorts of men that do properly make the two cities we speak of: the one is of men that live according to the flesh, and the other of those who live according to the spirit.” (p. 235-236) “Two loves therefore have given origin to these two cities, self-love in contempt of God unto the earthly, love of God in contempt of one’s self to the heavenly. The first seeks the glory of men, and the latter desires God only as the testimony of the conscience, the greatest glory.” (p. 236) The schema of Biblical ages that Augustine uses is revealed in the Scriptures rather than observed in history. Some Wars may be just. (p. 239) “Civil government is doubtless a good insofar as it prevents anarchy; but this makes it a good of a negative sort. One could as well say that it is a necessary evil.” (p. 239) “The interaction of two antagonistic societies, with different origins, conflicting motives, contradictory aim, and opposite ends is history.” (p. 241) “From Abraham to Christ all important events occurred either within the Jewish nation or in relation to it. … Since the time of Christ the geographical or national center of gravity has been replaced by a spiritual center, the Church. The city of God and the worldly city no doubt produce history by conflict, but the whole process if for the good of the city of God.” (p. 242) “God uses the wisdom and also the foolishness of men to work out his plans.” (p. 243) “The Christian holds that God determines the course of history and so the events unfold God’s plan.” (p. 250) “Although the end is determined and inevitable, it is not true that contrary actions, even fascism or socialism, lead to the same result. There are two results: each city goes to its appointed end and it goes there by means of its actions.” (p. 252-253) Clark also talks of Augustine’s City of God here.

Throughout the book hints of Clark’s view come to light. There is definitely an emphasis on the necessity of presuppositions, the importance of epistemology, the necessity of grounding historiography with some ethical theory, and the Biblical idea that all things work together for good for those who are called according to God’s purpose.

If one is interested in reading further, my twin brother, a history professor at Georgetown University and an expert on historiography, has written critically on Clark’s views here.

Two other reviews, shown below, are reproduced in pictures (unfortunately blurry) from Dr. Clark’s personal papers. 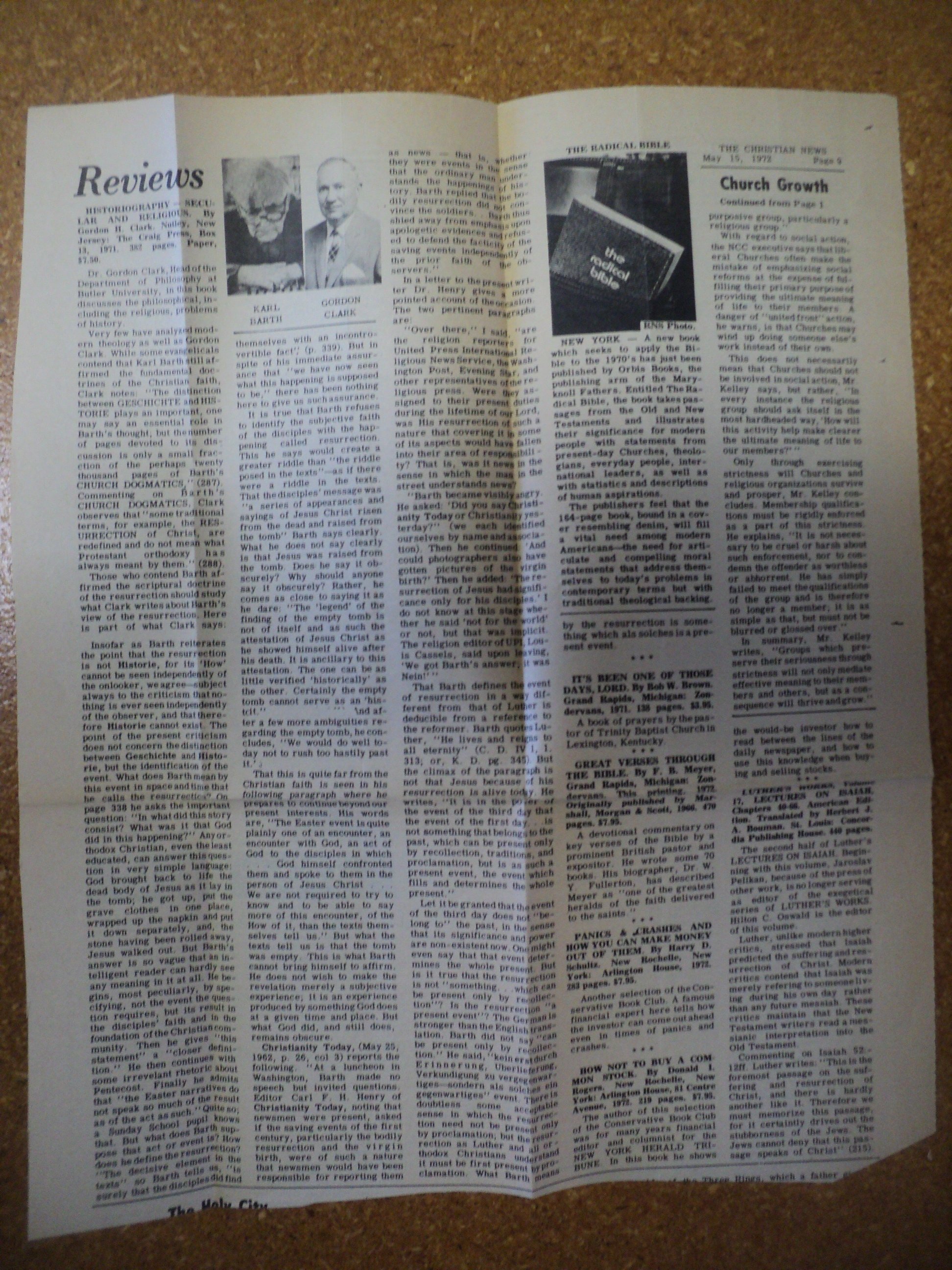 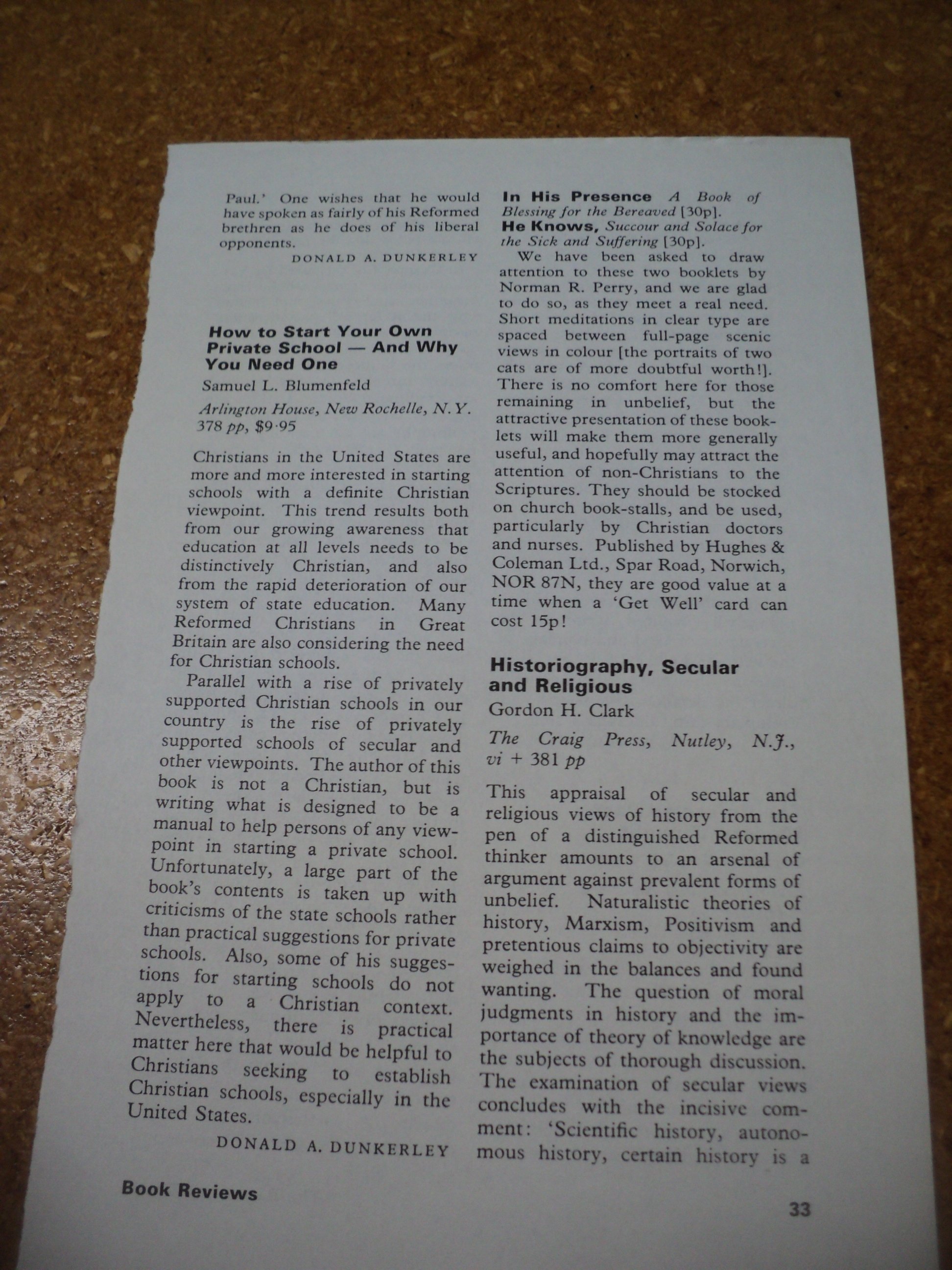 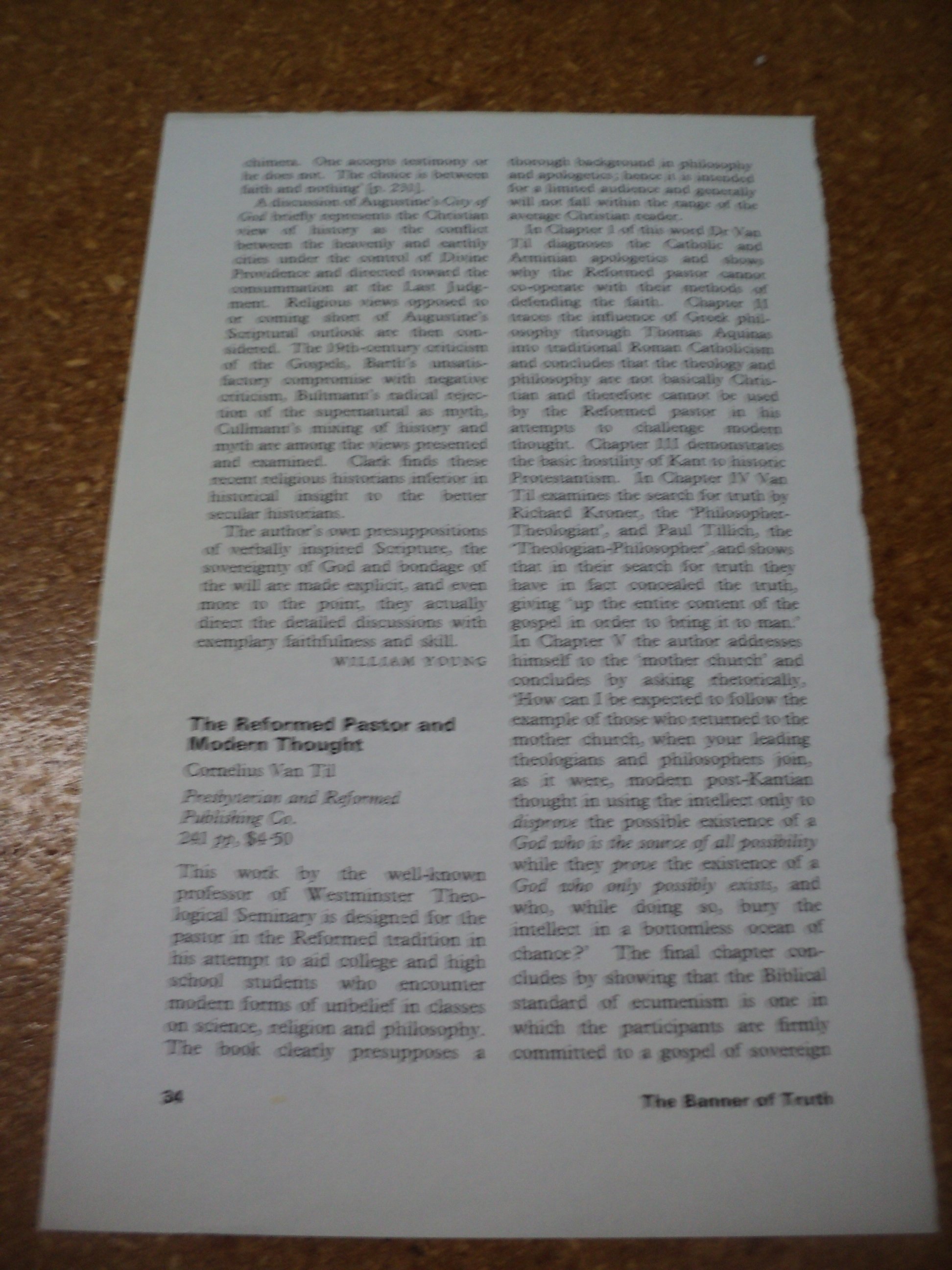 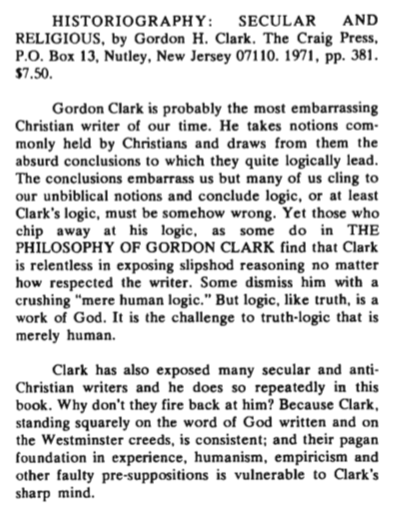 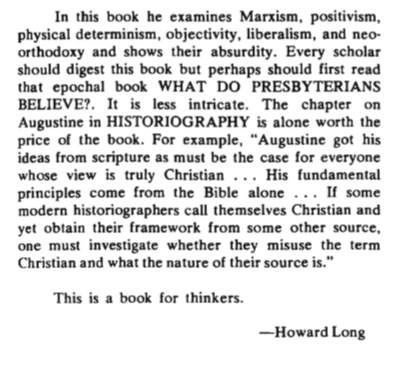 And finally, here is a later cover design of this volume: 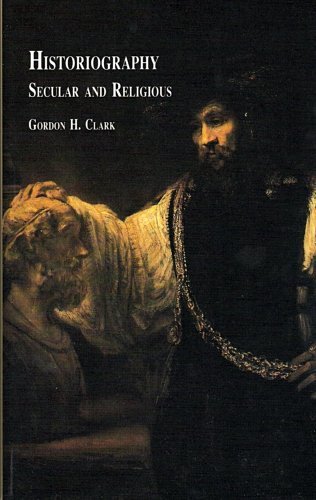