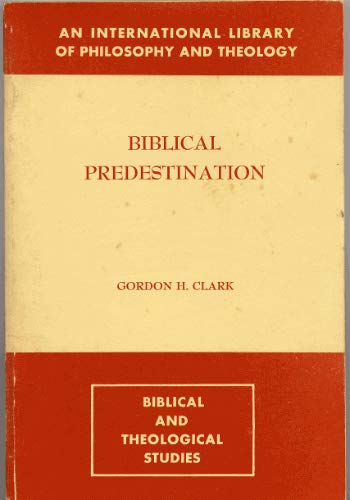 In Biblical Predestination Gordon Clark first works from the general to the specific. In the first three chapters he discusses some attributes of God’s sovereignty that set the stage to discuss predestination. In Chapter 1 he argues that God created all things for His glory; in Chapter 2 that God knows all things; and in Chapter 3 that God plans and acts. Of note is a defense of teleological supralapsarianism (p. 21-28), and arguments that God does not merely permit events to happen but actually causes them to happen. “God is the original cause of everything. Out of his mouth proceedeth both good and evil.” (p. 61)

Beginning then in Chapter 4, Clark directly makes his case for predestination. Romans 8:28-30, which he quotes, well summarizes the position: “And we know that all things work together for good to them that love God, to them who are called according to his purpose. For whom he did foreknow, he also did predestinate to be conformed to the image of his Son, that he might be the firstborn among many brethren. Moreover whom he did predestinate, them he also called: and whom he called, them he also justified: and whom he justified, them he also glorified.” As Clark notes, “The passage begins with the universal propositions that all things work together.” (p. 67) “God chose certain people on purpose and he works every detail of the universe for their good. The ostensible tragedy of Christ’s crucifixion was intended for their good. Nero, the papacy, Napoleon, and Stalin conspire to benefit the elect. And even the fall of a sparrow. God determines everything.” (p. 67) “There are many details in the doctrine of predestination and each should be given its due weight; but the basic, the final, the ultimate answer to all objections is the relative positions of Creator and creature. All objections presuppose that man is in some way or other independent of God and has obtained from somewhere or achieved by his own efforts some rights over against him. … The people who object to predestination have an exalted opinion of themselves and a low opinion of God” (p. 81-82)

Chapter 6 is a critique of the notion of Free Will. Descartes probably represents most who hold that the will is free in that he “bases this assertion neither on the Bible, nor on logical deduction, but on immediate experience.” (p. 112) Clark writes, “It is so obvious that the Bible contradicts the notion of free will that its acceptance by professing Christians can be explained only by the continuing ravages of sin blinding the minds of men.” (p. 114) Referencing Luther’s The Bondage of the Will, Clark writes, “It will be clearly seen that Protestantism began with a denial of free will, and that its reintroduction into Protestant churches a century later was a step back toward Romanism and justification by works.” (p. 115) “People who have not studied philosophy are the very ones who are least able to see when it is being imposed on the Bible. Thus it is, coupled with man’s sinful desire to be independent of God, that people who think they are very good Christians defend freedom of the will.” (p. 120) “In many discussions on free will, after quoting and explaining a dozen or more verses, and after having met stubborn opposition to the Reformation doctrine, I have often said, Well, then you give me the verses on which you base your idea of free will. This challenge usually produces a blank state. No verses are needed, they say. Everybody knows he is free.” (p. 121) “Usually Arminians naively base their theory on many biblical statements that say this man and that man willed to do this and that. Well, of course, the Bible clearly asserts that men will. But the question is not whether they will, or have a will, but whether God determines their will. The question is not whether a man chooses; but whether his choice had a cause or a reason. The Calvinist does not deny will or volition; he denies that volition like all the rest of creation is independent of God.” (p. 122)

An Epilogue reviewing some history of the doctrine of predestination in the church concludes the volume.

Now then, there are two particularly relevant extant letters which Clark received in the years after the publication of this book. The first is from and with permission of Gary Johnson, who would work with the Trinity Foundation in its early years, praising the volume. The second letter is from Dr. Clarence Efroymson, a Jewish professor colleague of Clark’s at Butler university.

For the past few weeks I have been deciding whether or not to write a short letter in appreciation of your fine and most excellent book Biblical Predestination. I simply cannot resist.

As a very recent convert to Calvinism, there have been many perplexing questions of natural sloth and depravity that have arisen in my mind concerning the sovereignty of God. Perhaps the most significant impression of your book have been an enlarged awareness of my own ignorance of determination and the constant need and desire for scriptural appeal to manifest the glory of our God in His complete and total sovereignty.

Dr. John W. Robbins is my neighbor and very able guide in Friday night bible studies. I am eternally grateful to my Lord for his inspiration and influence in the introduction of all your books to me.

I would like to end here by making a joyfully rash statement that Biblical Predestination ought to be required reading in all churches throughout the world.

And the second letter:

I have read the tract, Biblical Predestination, which you sent me, and for which I thank you. In this – as w/ everything of yours which I have read – I enjoy the directness and succinct quality of your address, and also the logic of the various arguments. That is however – or so I imagine – of little or no moment to you. But then you know that Scripture to me is in two essential respects not what it is to you.

I confess to misgiving or regarding the expression: “the unbelieving synagogues of Satan.” I haven’t a concordance (except Mandel-Korn) at hand – so can’t know whether this is a phrase used in the N.T.

But, for the rest, I am reminded once more of that talk which you gave many years ago – within a year or so of your coming to Butler – at the (I think) ΦΚΦ, or faculty dinner when the cafeteria was in the basement of Jordan Hall. You will forgive me if I say it was one of the, perhaps the most impressive talk(s) I have ever listened to. The impression lasts.

– in despite of all differences,
yours cordially,
Clarence