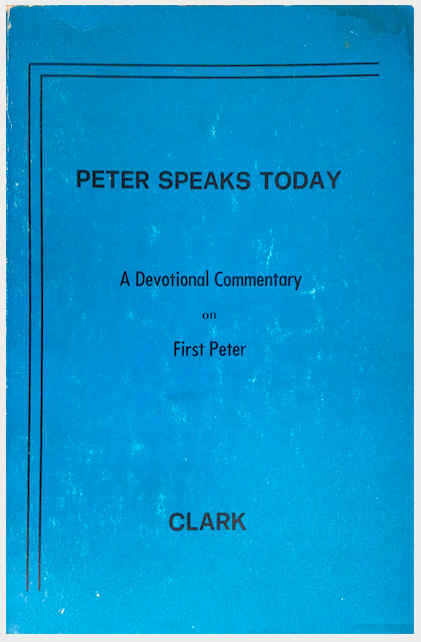 This is the first of a number Biblical commentaries written by Gordon Clark. In time his published commentaries would cover 1 Peter, 2 Peter, 1 Corinthians, Colossians, 1 John, 1 Timothy, 2 Timothy, Titus, Ephesians, and Philippians. One might notice that these are all on epistles; he never wrote a commentary specifically on an Old Testament book or New Testament Gospel.

Writing a commentary on First Peter seems to have been a project Clark had long worked on or at least thought of working on. Twenty-five years before publication of this volume he noted in a letter, “I could continue my commentary on First Peter.” (Gordon H. Clark to Robert Strong, May 9, 1942) Also that year Edwin Rian of Westminster Theological Seminary wrote to Clark saying “I believe we can use your expositions of I Peter as soon as [Floyd] Hamilton has finished on Ephesians.” (Edwin Rian to Gordon H. Clark, Nov. 16, 1942) It is unknown to me what happened to that project, but perhaps it isn’t too much speculation to think it was the basis, at least in thought if not words, of the later commentary.

Throughout Peter Speaks Today Clark references the King James Version. In the preface however he critiques it, writing, “Let us admit that the King James Version suffers both because the best manuscripts had not been discovered, and because various grammatical mistakes were made.” That grammatical mistakes were made in the KJV must surely be agreed to by all but the more ardent KJV-only proponents. That “better manuscripts have been discovered” does not necessarily mean that Clark here supports the eclectic approach to textual criticism. These “better manuscripts” in his mind might just be copies of the Majority Text similar to but superior to the Textus Receptus underlying the King James Version’s original translation. Supporting this we might note that later in life Clark would in fact promote the Majority Text of the Greek New Testament.

Since I’ve longed despised the attempts of some persons to end conversations by saying “Well, that works in theory,” I’m glad to see Clark’s comment in the Introduction saying, “Practical people should not disparage theory. They cannot get along without it. For practical applications must always be applications of some theory: and it makes a world of difference what theory is applied.” (p. viii.) Clark then notes that while Peter has theory and doctrine, it is practical. It is because 1 Peter is practical and applicable to all times that Clark calls his commentary Peter Speaks Today.

In this book Clark comments on various topics including: obedience, the Trinity, Arminianism, assurance of salvation, antinomianism, second causes, the various aspects of salvation, the unity of the Scriptures, adoption, the image of God, holiness, God as not a respecter of persons, the primacy of theology to ethics, the atonement, saving faith, verbal inspiration, election, civil government, the right to work (p. 102), marriage, the proper mode of baptism, church government, and ordination by all elders (p. 151).

Clark returns also to his point from the introduction, saying, “It is most unusual in the Scripture to find an exhortation to right conduct without a doctrine given as a reason. The popular distinction between what is doctrinal or theoretical on the one hand and what is practical on the other is not so sharply drawn in the Bible as it is in the minds of some people. Fundamentally, the distinction is not drawn at all. As has been said, obedience is both mental and internal as well as external and overt. And mental obedience, believe in the truth and authority of what is taught normally leads to right conduct.” (p. 95)

On page 119 Clark writes of a Christian college where “an attempt was made by part of the faculty to remove Theism from the curriculum.” He continues, “The uncompromising president, who stood so staunchly against al forms of unbelief, had just been fired; and now those who had engineered his dismissal wanted to remove the course he had taught.” Knowing the history, the identity of this college and its president is easily discernible; Clark is speaking of Wheaton College and its former president J. Oliver Buswell.

When Clark comes to 1 Peter 3:18-22 and the “spirits in prison” he spends consider time explaining this challenging passage. For the church newspaper The Witness, Clark wrote an article on this passage back in 1951.

Another five years after the publication of this volume comes Clark’s commentary on II Peter. Then, in 1980, these two commentaries are published together in a single volume titled 1 and 2 Peter.

Another cover version, courtesy of Wayne Sparkman at the PCA Historical Center is equally as glamorous as my blue copy shown above. 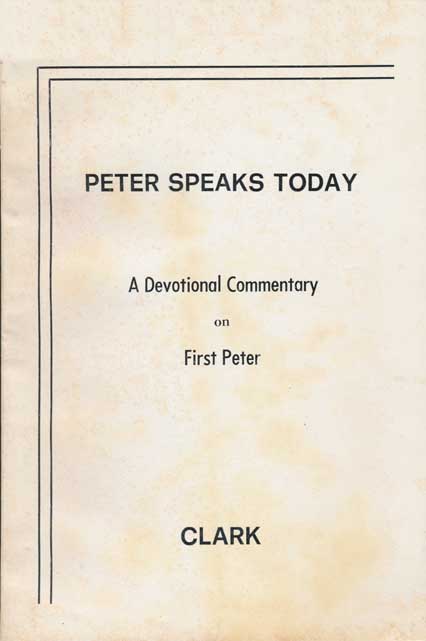