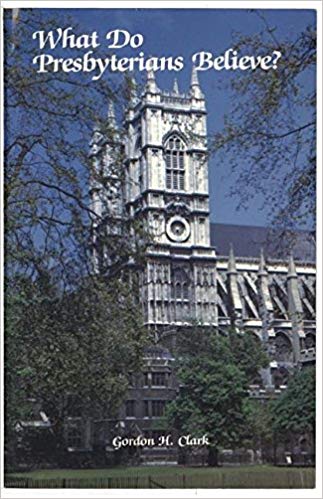 What Do Presbyterians Believe? The Westminster Confession Yesterday and Today, by Gordon H. Clark, Phillipsburg, NJ: Presbyterian and Reformed, 1965, 2001, 284 pp.

This book is a revision and expansion of Gordon Clark’s earlier What Presbyterians Believe.

In the preface to the 1965 edition Clark critiques the United Presbyterian Church in the United States of America (the name of that joint body of the PCUSA and the UPCNA from 1958 to 1983) for their moves to officially reject the Westminster Confession of Faith. He writes, “the subscription now proposed, and in its first official text accepted by a five-to-one vote, does not commit the minister to any definite theological position, not even to the vague meaningless phraseology of the new creed itself.” He then asks and answers, “What then do Presbyterians believe? Well, if the present proposal passes all the legal steps of the procedure, it can be said that the United Presbyterian Church in the United States of American will not believe anything. Just nothing at all.”

Following the 1967 UPCUSA decision to relegate the Westminster Confession to a book of confessions—all equally unauthoritative—Clark wrote to the Editor of the Layman’s Committee of that church with a similar argument but a stronger conclusion:

“With the 1967 Assembly the new confession was adopted and the ordination vows changed. These vows result in the fact that the new confession is not a confession at all, for no one confesses it. You cannot now try anyone for heresy because there is no such thing as heresy in your church. The vows do not commit a minister to any doctrine. Your church therefore believes nothing. It is therefore not a church at all.” – Gordon H. Clark to James L. Cochran, Aug. 27, 1973. In Clark and His Correspondents: Selected Letters of Gordon H. Clark, eds. Douglas J. Douma and Tom W. Juodaitis, Trinity Foundation, 2017, 189-190.

So then, as Clark continues in the preface, “But if it is asked What do Presbyterians believe, the answer will always be, the Bible and its most excellent summary, the Westminster Confession.” This book then is a commentary on that confession. The changes from the earlier edition of another title are too many to list.

Rather than summarizing this book I just want to note a couple of things. One, I’ve found it particularly useful as a reference guide for some of Clark’s theological—rather than more philosophical—thought. Then, I’ve noticed in recent years a resurgence of interest in the Westminster Confession and the Assembly which wrote it. Valuable books on the subject are The Practice of Confessional Subscription by David W. Hall, The Theology of the Westminster Standards by J. V. Fesko, and (so I believe, but have not yet read) Chad Van Dixhoorn’s Confessing the Faith: A Readers Guide to the Westminster Confession of Faith.

2 thoughts on “GHC Review 15: What Do Presbyterians Believe?”