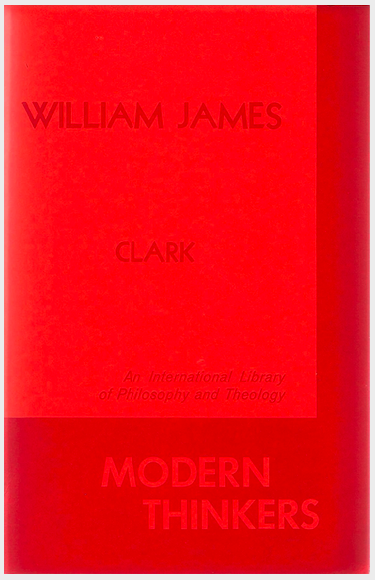 This book, writes Gordon Clark, was “designed to help the defense and development of Christian theism.” As such it is one of many critiques he wrote against some particular philosophy. In that category we might also include his Dewey and Karl Barth’s Theological Method, and portions of Religion, Reason, and Revelation, Philosophy of Science and Belief in God, Historiography Secular and Religious, and Behaviorism and Christianity among other volumes.

The original of William James was a short book, only 47 pages, written for the Modern Thinkers series of the International Library of Philosophy and Theology. Later it was printed with Clark’s Dewey in a combined volume. [Page references in this summary review will be from this 2nd edition, printed as William James and John Dewey (Trinity Foundation, 1995).]

Clark’s professor Edgar A. Singer (1873–1955) had studied under William James (1842–1910) at Harvard, and in fact was briefly an instructor in his psychology laboratory. James once called Singer his “best all around student” in his thirty years of teaching. Singer seems to have supported James’s philosophy of pragmatism at the University of Pennsylvania where he became the head of the philosophy department as well as Clark’s dissertation advisor. In writing against the philosophy of William James then, Clark shows a definite disagreement with his mentor Singer.

Before reading Clark’s book on William James it might be helpful to read the encyclopedia entries Clark wrote on William James and on his philosophy of pragmatism. There is also a section on James in Thales to Dewey, pages 500-508, where he is categorized among the contemporary irrationalists.

Even with these prerequisites, this book is a difficult read. Various philosophical topics come and go and unless the reader has previous knowledge of William James it is unlikely that he will follow the argument. Of all of Clark’s books, this might be the least likely to be recommended. A summary will here be attempted, but perhaps quite inadequately given my own difficulties in understanding the material.

1. Introduction
Clark notes that James’s style is intensely interesting. Of his many writings, the focus of the critique will be on James’s A Pluralistic Universe and his Pragmatism. In addition to criticism, “possibly there could emerge something more positive also.” (p. 4)

2. The Philosophic Background
James reacted against both the absolute idealism of Hegel and against mechanistic scientism. In common those two views are both forms of monism. “The one says that all is spirit; the others holds that atoms alone are real.” (p. 6) James instead looked to pluralism. The best description of this position comes from the next chapter where Clark writes of James, “He asserts that some things are utterly unrelated to and independent of some other things.” (p. 14)

3. A Pluralistic Universe
“James defines his terms: ‘Empiricism means the habit of explaining wholes by parts, and rationalism the habit of explaining parts by wholes.’” (p. 8) For James no other method of explanation than empiricism is open to us. Only parts are available to us, never the whole. James uses the term intimacy in relation to morality, but does not well define it. Clark writes, “James continues to base his pluralism on the vague principle of intimacy.” (p. 12) Clark argues that James’s philosophy hit an impasse (that James himself was aware of) which forced James to abandon either “psychology without a soul” or to abandon logic itself. Ultimately James found himself compelled to give up logic. James says that he did so, “fairly, squarely, and irrevocably.” (p. 21) Throughout the whole chapter Clark emphasizes James’s hatred of Christianity and consequent unwillingness to consider its proposals as a philosophic solution.

4. Pragmatism
James asserts that any concept means its practical consequences. All beliefs are really rules for action. Pragmatism, Clark notes, is basically a theory of morality. Like Kierkegaard, Nietzsche, Durkheim, Dewey, and Ayer, James opposes the law of contradiction. As such his view, like theirs, is left without rational foundation. “No reason exists for agreeing with them.” (p. 44) “James’s position, so it would seem—and pragmatism as a whole wherever accepted—has no base other than personal preference.” (p. 48) “He has no criterion for distinguishing good from evil.” (p. 48) With thus nothing to recommend it, surely Christian theism is preferable to pragmatism.