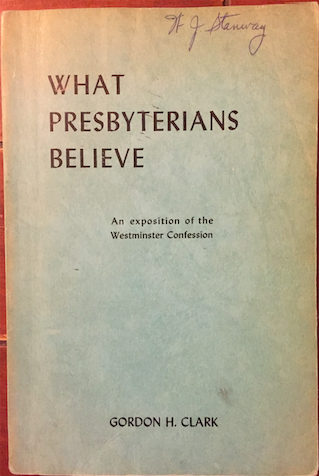 What Presbyterians Believe, An exposition of the Westminster Confession, by Gordon H. Clark, Philadelphia: Presbyterian and Reformed, 1956, 130 pp.

The introduction to the book is by John R. Richardson (1901 – 1992), then pastor of Westminster Presbyterian Church in Atlanta, GA and a contributing editor to the Southern Presbyterian Journal. It was for this journal that Clark originally wrote a series of articles on the Westminster Confession of Faith that became the basis for the present volume.

Two letters from John R. Richardson to Gordon Clark are extant in the Clark Collection at Sangre de Cristo Seminary. In the first, of Oct. 26, 1954, Richardson writes, “First I want to thank you for the articles you have been publishing in the Journal. They are very helpful and I am sure will stimulate constructive thought.” In the second, of Jan 20, 1955, Richardson writes to Clark in what must have been the impetus for the volume under review, “I want to thank you for your articles on the Confession of Faith. I am writing you to ask that you consider having them published in permanent form. It may be that you would like to amplify a few of them in the event you decide to have them published in book form.”

Before commenting on each chapter of the Confession in turn, Clark begins with brief sections on “Knowledge and Ignorance” and “Creeds.” The main point of the former seems to be that Biblical knowledge is necessary to a revival or reformation. The latter focuses on the importance of fidelity to the Confession.

Rather than summarizing each of this book’s chapters, this review will simply note some items of interest from them.

1. The Holy Scriptures
Against “mystics and visionaries who claimed that God spoke to them directly,” Clark notes the cessationist position that “the rule of faith which the Reformers acknowledged was the Scriptures alone.” (p. 5) In this chapter Clark also contends for the infallibility and inerrancy of the Scriptures. And his view of Romans 1:20 is also presented. (For more on that see here.

3. God’s Eternal Decree
Clark writes, “God is not the author of sin that is, God does nothing sinful.” (p. 13) This provides a definition of what Clark believes “author of sin” to mean. This definition allows him to contend that God is the cause even of sin but not the author of it. He continues, “Christians who are not Calvinists must admit that God in some sense is the cause of sin, for he is the sole ultimate cause of everything. But God does not commit the sinful act, nor does he approve of it and reward it.” (p. 14)

Clark also notes that some of Calvin’s detractors, like Wesley, thought he had a revulsion to the doctrine of reprobation, calling it a horrible decree. But, Clark explains, “This charge against Calvin’s integrity is at best explained on the basis of an ignorance of Latin. True, in Latin Calvin referred to reprobation as a decretum horrible, but in Latin horrible does not mean horrible. It means awe-inspiring. … Calvin therefore was saying that the decree of reprobation was one that inspired awe in the presence of God.” (p. 14)

4. Creation
“That the Bible is not a book on science is often given as an excuse for its many alleged mistakes. The assumption seems to be that science books do not make mistakes. But over the centuries scientific theories have come and gone. Even in the last half century physics has been completely altered. … Of course, the Bible is not a science textbook, but when it mentions natural phenomenon it speaks the truth.” (p. 18)

5. Providence
Relevant to the discussion of the salvation of Arminians Clark writes, “Not all Christians are Calvinists.” He continues, “It must not be supposed that these people are therefore lacking in sincerity and devotion or that they are outside the fold of Christ. But such is the clarity of the Bible in its teaching on God’s sovereignty that Presbyterians cannot convince themselves that such people have a sufficient understanding to discharge the responsibilities of an ecclesiastical office. They stand in need of further instruction. They should study the proof texts cited by the Confession.” (p. 22)

7. God’s Covenant with Man
In one of only a couple of places I know of where Clark speaks on baptism, he writes, “As the Old Testament Passover became the Lord’s Supper, so the Old Testament’s circumcision became the New Testament baptism. Those who deny the legitimacy of infant baptism on the ground that there is no specific command to that effect in the New Testament are embarrassed when asked for a specific New Testament command to admit women to the Lord’s Supper. Specific New Testament commands are not absolutely necessary when the Old Testament has spoken with sufficient clarity. Such objections to infant baptism are based on a wrong conception of the relation of the two Testaments, a denial of covenant theology, and a neglect of the Westminster Confession. The remedy is obvious.” (p. 33)

9. Free Will
“The sources of confusion in discussions on free will are chiefly three. First, the discussion is allowed to proceed without anyone’s defining the key terms; second, implications are assumed to be valid when they are fallacious; and third, more than in any other theological discussion there is a temptation to neglect the express statements of Scripture and to depend on uninspired philosophy, common opinion, and hasty guesswork.” (p. 43)

“The Bible never actually mentions free will, as it certainly would have done, if free will had been as important as the Arminians think.” (p. 45)

11. Justification
“In general there are only two plans of salvation. The first plan has several varieties, but basically it is a purely human plan of salvation by works. Its sole drawback is that the works do not work. Heaven’s requirements are too stringent, and we cannot make the grade. The second plan is the divine plan of justification by faith.” (p. 50) “Sinful men hate the doctrine because it reveals their sin; proud men hate it because it prevents them from earning heaven by their own merit.” (p. 51)

21. Religious Worship and the Sabbath Days; Lawful Oaths and Vows
In a rare case Clark professes his ignorance. He writes, “The Confession also says, in conformity with I John 5:16, that we should not pray for anyone whom we know to have sinned unto death. The present writer wishes he knew what the verse means and how to apply it. He does not, and proceeds to the next point.” (p. 85) Clark’s commentary on First John, written some years later, does not conclude a meaning to that verse either. 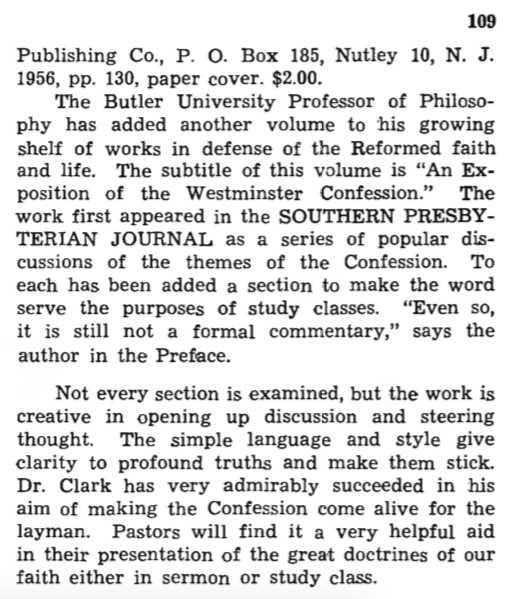 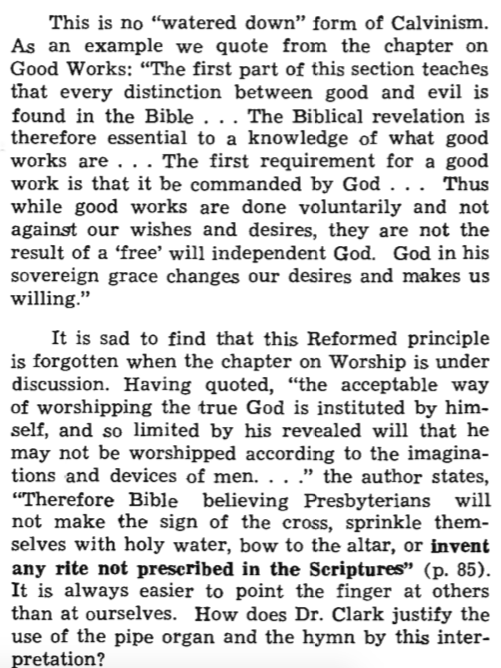