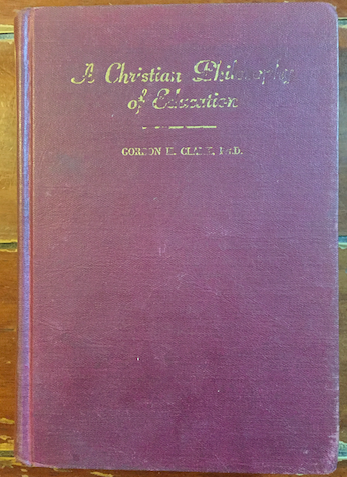 With A Christian Philosophy of Education we now move from that period in which Clark wrote on ancient Greek Philosophy into that in which he began to publish constructive contributions to Christian thought. That he started to present his Christian philosophy with a book on education is perhaps surprising. Education itself is not one the major areas of philosophical inquiry; it is neither epistemology, metaphysics, ethics, politics, nor aesthetics. But, as Clark shows in this volume, all subjects including education necessarily require some philosophical grounding. And so Clark—at this point a university professor for nearly twenty years—choses education as the subject, the vessel, by which to present his philosophy more generally.

Since in the preface to the second edition written “nearly forty years later” Clark notes that, “The present book is about three halves the length of the earlier one,” I got a hold of an original 1946 copy to prevent attributing anything to Clark in the 1940s that might have only arisen later.

Clark’s philosophy of education, advocating as it does the disinvolvement of government in schooling, was very likely influenced by J. Gresham Machen. (See my review of Machen’s Education, Christianity, and the State here). It is probable in turn that Clark’s book then was an influence on R. J. Rushdoony whose The Messianic Character of American Education was published in 1963.

Clark’s presuppositional view begins to be expounded in the first chapter; even in its title, “The Need of a World-View.” “Doubtless,” Clark writes, “every professor of education has some sort of philosophy underlying his views of education, but it is ordinarily an unconscious philosophy, unexpressed and unacknowledged, or at best poorly formulated.” (p. 15) Colleges and universities speak of “aims in the plural rather than the aim of education” which is “a tacit admission of failure to find any one comprehensive aim.” Clark contends,

“There is only one metaphysics, one philosophy, that can really unify education and life. That philosophy is the philosophy of Christian theism; that metaphysics is the metaphysics of the Being of the Triune God. What is needed is an education system based on the sovereignty of God, for in such a system man as well as chemistry will be given his proper place, neither too high nor too low. In such a system there will be a chief end of man to unify, and to serve as a criterion for, all his activities. What is needed therefore is a philosophy consonant with those greatest creeds of Christendom, the Westminster Confession, the Canons of the Synod of Dort, and the like.” (p. 27)

Clark’s presuppositionalism is also evident when he writes, “instead of beginning with facts and later discovering God, unless a thinker begins with God, he can never end with God, or get the facts either.” (p. 38) He then argues that neither archaeology nor the classical arguments for the existence of God prove theism. But, even though there is no strict proof of Christianity, “it is under no greater disadvantage than is any other system.” (p. 41) His argument continues, “Basic world-views are never demonstrated; they are chosen.” (p. 41) “So it is with every world-view; the first principle cannot be proved — precisely because it is first. It is the first principle that provides the basis for demonstrating subordinate propositions. Now if such be the case, the thoughtful person is forced to make a voluntary choice. He may choose theism, or he may choose pantheism, or he may prefer to reject these various possibilities and choose skepticism. At any rate he must make a choice.” (p. 41) Clark, however, rejects skepticism because “every statement of skepticism involves a contradiction, in that it is an assertion that we know what we do not know.” (p. 41) And, “The atheist who asserts that there is no God, asserts by the same words that he holds the whole universe in his mind; he asserts that no fact, past, present, future, near, or far, escapes his attention, that no power, however great can baffle or deceive him. In rejecting God, he claims omniscience and omnipotence. In other words an atheist is one who claims that he himself is God; and the pantheist [holding a logically identical position] must be said to join him in the same claim.” (p. 45) The suspension of judgment (Agnosticism) proves to be impossible as “A man either lives with fear of God before his eyes, attempting to make his whole life a song of praise to his Creator, or he does not. If he does, he is a theist; if he does not, his life shows that, far from being neutral, his serious belief is that God will not judge him and his actions, that there is no God who rules the universe with him in it.” (p. 48) “But if one must choose without strict proof, none the less it is possible to have sane reasons of some sort to justify the choice. Ultimately these reasons reduce to the principle of consistency. A postulate must be chosen such that it makes possible a harmony or a system in all our thoughts, words, and actions.” (p. 48-49) Those who choose not to be consistent need “constant care by well qualified attendants.” (p. 49)

To avoid reproducing the whole of the book (or even just the arguments) in this review it might just be noted that the book then has a chapter on “The Alternative to Theism” which shows the despair of humanism, and then three chapters showing the impossibility of neutrality. In the end Clark concludes, “The aim of education is the glory of God” (p. 164) The end of education, so writes John Robbins in the foreword to the second edition, is the creation of Christian men (and women).

Ultimately this book is important, not only for Clark’s anti-public schooling, pro-Christian education arguments, but for the laying out of his system of philosophy for the first time. In his next book, A Christian View of Men and Things, this philosophy is expounded in further detail.

Thanks to Wayne Sparkman for scanning these images of the original dust jacket, and cover and spine: 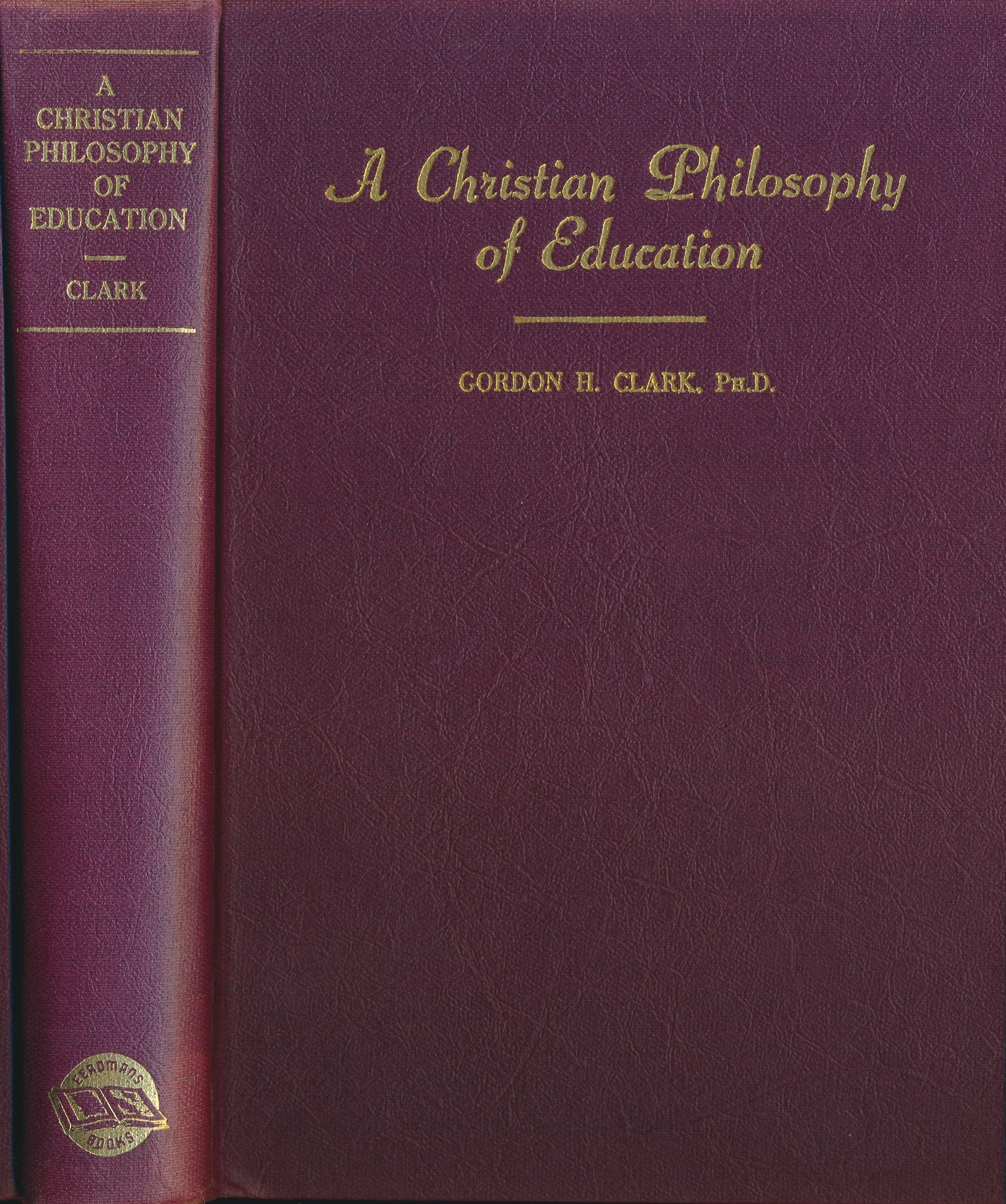 2 thoughts on “GHC Review 6: A Christian Philosophy of Education”