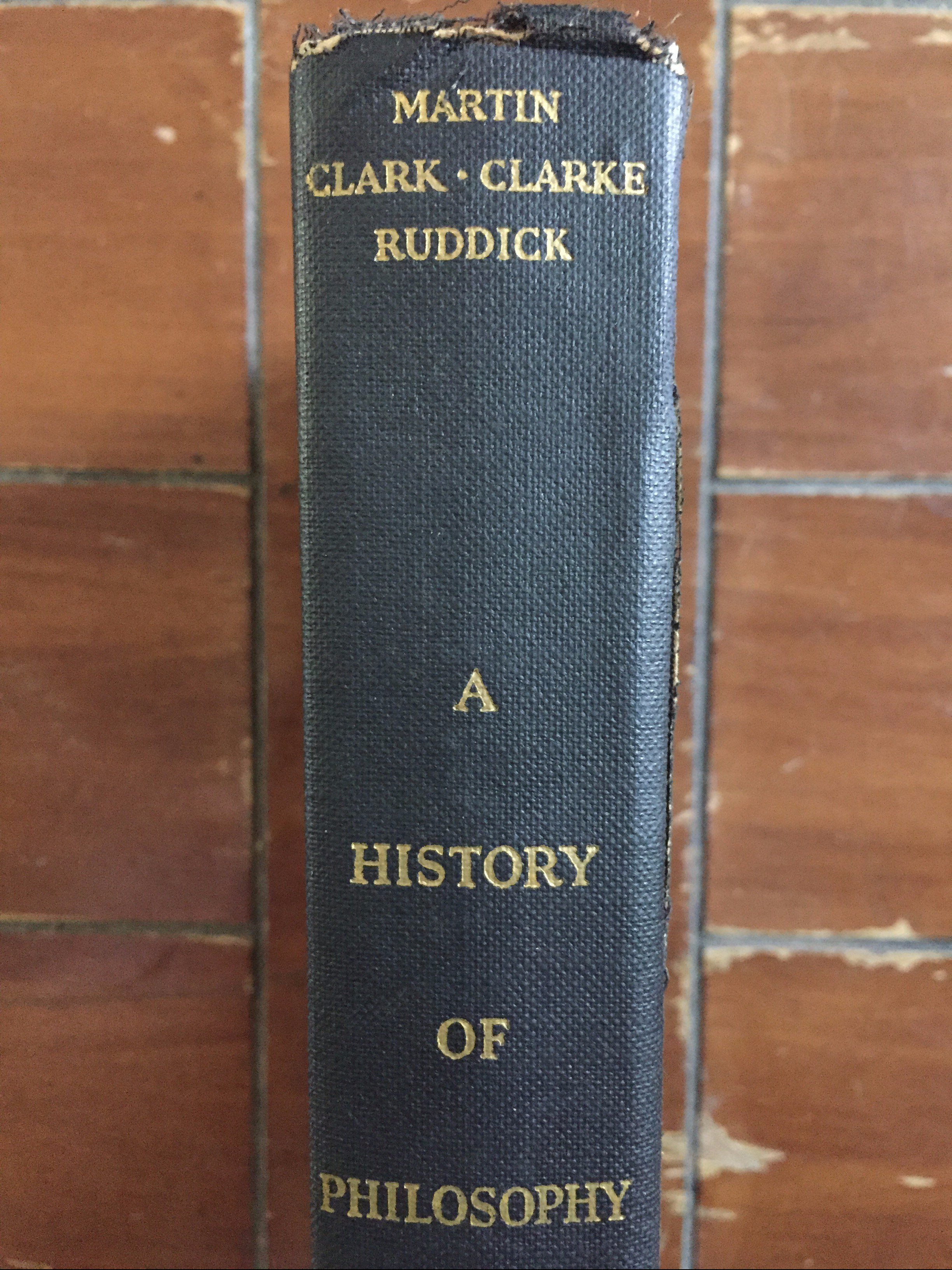 The untimely death of Dr. Seymour G. Martin left his A History of Philosophy in a partially finished form. Three members of the philosophy department at the University of Pennsylvania—Gordon H. Clark, Francis P. Clark, and Chester T. Ruddick—then took up the task of completing the volume. When the book was finished, it is said, the head of the department, Dr. Edgar A. Singer Jr. “judged the finished project, which he had initiated, as the work of men ‘thinking with the times, personalities, circumstances of which their story tells; never do they blur the effect by intruding their own thoughts about these distant moments and their sequence.’”

Of the men other than Gordon Clark who worked on this volume, I’ve pieced together the following information:

Francis Palmer Clarke (1895-1976) was, like Gordon Clark, the son of a Presbyterian minister. He earned his Ph. D. in philosophy from the University of Pennsylvania in 1928 and remained there as an instructor—and then professor—until 1966, even for some time (1938-1945, 1947-1960) serving as the chairman of the department. His major work centered on Thomas Aquinas.

Chester Townsend Ruddick (1904-1980) earned his Ph. D. in 1931 at the University of Delaware. In one letter in 1942 Clark noted that with respect to finding a professor of philosophy position, Ruddick had once “looked for five years and found nothing.” It seems Ruddick must have finally found a position at Penn. He later taught at Lake Erie College.

As for Gordon Clark’s contribution to the book, his section is Part One: Ancient Philosophy, pages 9 through 236. There he has chapters on The Pre-Socratics, Plato, Aristotle, and The Hellenistic Age. If you cannot find a copy of A History of Philosophy, all of this material is reprinted on pages 1-255 of Ancient Philosophy (Trinity Foundation, 1997).

Clark’s chapter on the pre-Socratics nicely shows that the philosophers of that period were not each working in isolation but were each influenced by their predecessors and/or contemporaries. Philosophy developed in not entirely unpredictable or aimless ways. The Milesians (Thales, Anaximander, Anaximenes) first focused on understanding nature. The succeeding pre-Socratics were almost universally influenced by the Milesians in some way. Xenophanes, from nearby Colophon, was “stirred by the conflict between the theological conceptions in the poems of Homer and Hesiod and the new modes of thoughts [of the Milesians].” (p. 18) Pythagoras “spent his early years on the island of Samos in the Aegean, and there he presumably made his acquaintance with the philosophical speculations of near-by Miletus.” (p. 20) Pythagoras “was on the track at least of a valuable idea: that mathematically expressible processes do underlie physical phenomena and that it is the business of science to discover them.” (p. 27) The interest of Heraclitus (of Ephesus, near Miletus) shifted from the details of natural phenomena to the meaning and import of the universe as a whole. His “everything changes” doctrine is found to be self-contradictory by the rationalist Parmenides of Elea who concluded that change is in fact an illusion. Zeno of Elea, a student of Parmenides, then defended his teacher’s doctrine of immobility with illustrative examples. Zeno’s contemporaries, Empedocles and Anaxagoras, attempted a compromise between the Eleatic doctrine and the testimony of every man’s senses. Empedocles moved beyond the Milesian attempts of explaining the universe as a single substance and instead chose four­—fire, air, water, earth. Anaxagoras went even further and posited an infinite number of elements. Leucippus, who was probably a Milesian by birth, had Eleatic and Pythagorean teachers. In him and Democritus the existing line of philosophy speculation culminated in a thoroughgoing naturalism with two novel ideas, the atom and the void. Continuing along these materialistic lines Protagoras concluded that “one man’s perception may be more useful than another’s; but it cannot right claim to be truer in any further sense.” That is, naturalistic materialism eliminates the possibility of knowledge and lands Protagoras in skepticism. Clark concludes, “Henceforth this problem [how knowledge is possible] assumes far greater importance: subsequent thinkers—Socrates, Plato, Aristotle—realize that the nature of the world must be conceived to such terms as to make man’s knowledge of that nature an intelligible possibility.” Perhaps we could say the pre-Socratics tried to understand metaphysics, largely ignored ethics, and finally realized the necessity if not primacy of epistemology.

Due to their individual importance, Plato and Aristotle are each allotted their a chapter of their own. “Plato so overshadows all of his predecessors that he is usually put in a class by himself.” (p. 80) The failures of the pre-Socratics left the Sophists in skepticism. To surmount skepticism Plato devised his Theory of Ideas. These unchanging supersensible ideas make for stable objects of knowledge not possible in the Heraclitean flux of the sensible world.

While Plato wrote beautiful dialogues, Aristotle’s work “cannot be classed a literary masterpiece.” (p. 135) Instead of Plato’s theory of reminiscence Aristotle has knowledge rising up from its elementary form in sensation through various stages to the culmination in the intellect. (p. 164) Much of the chapter on Aristotle I found difficult, but foreshadowing Clark’s own philosophy,

I found this paragraph significant:

“In Platonic philosophy the highest object of knowledge was the Idea of the Good, the most universal of all concepts, superior even to Being itself. For Aristotle, God and the other existents which first philosophy considers are both objectively existent and also the highest universals; but they are universal because they are first in the scale of existents, not first because universal. Just how a science can be first because it investigates the highest rank of existents and because it investigates the highest universals is not quite clear, since ordinarily the more universal a concept is the less real it is. The difficult is removed if we assume that the highest concepts are in the mind of the highest being. Now Plotinus and Augustine, each in his own manner, will later make this assumption, but Aristotle remains vague.” (p. 168)

Clark devotes part of the chapter on Aristotle to an explanation of his logic. In a brief note, which decades later Clark will significantly elaborate on, he writes,

“On the whole, however, Aristotle’s formulation of logic has remained unchanged to the present day. Modern symbolic logic may analyze the proposition All S is P into more elemental expressions; with its universe of discourse and null class it may extend and generalize Aristotelian theorems; but its early suspicion that subalternation, without which there is no Aristotelian logic, is invalid, has been shown to depend on unwarranted or at least unnecessary assumptions.” (p. 175)

Clark’s final chapter on the Hellenistic Age. He explains that the three periods of Greek philosophy—Pre-Socratic, Plato/Aristotle, and Hellenistic—can be roughly said to correlate to the stages of science, epistemology, and ethics. This final chapter emphasizes the philosophy of Plotinus on whom Clark also wrote a number of published articles in the early years of his career.

Though that ends Clark’s contribution to the volume, other sections (written by Clarke, Martin, and Ruddick) may be of value in understanding Clark’s own philosophy. For instance, after quoting Augustine, F. P. Clarke writes, “This is clearly a reinterpretation of Plato, as Augustine himself admits. In the place of reminiscence literally understood, we have the doctrine of illumination.” (p. 258) It is the doctrine of illumination which Clark later takes up in his own theory of epistemology.

Here is a note on the book from The General Magazine and Historical Chronicle, October, 1941. 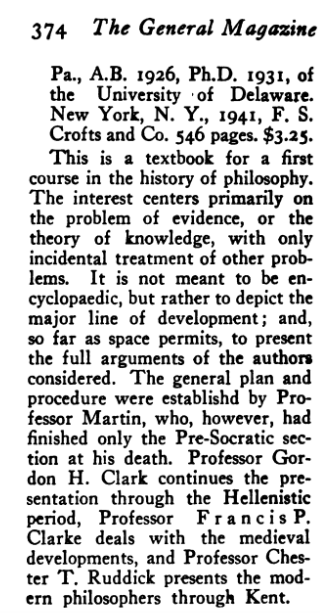 4 thoughts on “GHC Review 5: A History of Philosophy”