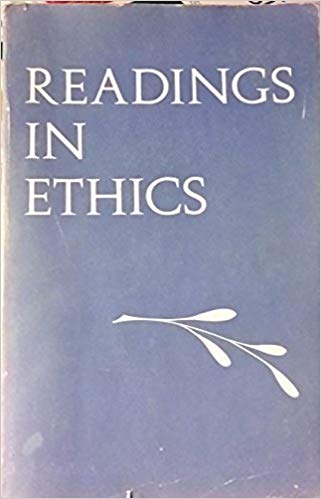 Not counting his dissertation, Gordon Clark’s first published book was Readings in Ethics. But as the majority of the content of Readings in Ethics is reproduced sections of the writings of various philosophers, and as Clark was not working alone on this volume, and as his next three published volumes share those same features, we have to go fully fifteen years later to Clark’s A Christian Philosophy of Education to find his first fully original and independent production.

The first question one might have with respect to the present book is “who was Clark’s co-editor T. V. Smith?” Well, this T. V. was Thomas Vernor Smith (1890 – 1964), a Professor of Philosophy at the University of Chicago and later an Illinois State Senator (1936 – 1938) and Congressional Representative (1938 – 1940). Smith wrote or contributed to a number of books including his 1962 autobiography A Non-Existent Man. How Clark came to know him I have not been able to determine. It seems reasonable to think they made contact somehow through professional philosophy circles.

The preface to Readings in Ethics explains that the goal of the book is to combine both “source and explanation” for use in an introductory course on ethics. “Chapters I–VII, IX–XI, XIII are the work of Dr. Gordon H. Clark; chapter XII, XIV–XVII of Professor T. V. Smith; and chapter VIII was contributed by Dr. Francis Palmer Clarke of the University of Pennsylvania.” (Ten years later this “Clarke with an e” contributed again with Gordon Clark and two others to A History of Philosophy.) Clark’s chapters then are Introduction, Pre-Platonic Period, Plato, Aristotle, Epicureanism, Stoicism, Early Christianity, Thomas Hobbes, Benedict De Spinoza, Joseph Butler and His Century, and Bentham and Mill. Smith writes on Immanuel Kant, T. H. Green, Henry Sidgwick, G. E. Moore, and John Dewey. Francis Palmer Clarke writes on The Middle Ages. Each chapter contains a few pages of historical overview and then reproduces sections of the writings of the philosopher or philosophers in view.

Gordon Clark’s chapters, mostly focusing on the ancient period, are befitting his interest and knowledge. That Francis Palmer Clarke (and not Gordon H. Clark) wrote on Augustine (in his chapter on The Middle Ages) is unfortunate since I would greatly welcome more insights into Gordon Clark’s understanding of—and reliance upon—Augustine. As Readings in Ethics is in that early phase of Clark’s writings on Greek Philosophy and is not a place where he propounds his own Christian philosophy, this review will be limited to just some brief comments.

Clark calls Plato “Probably the most brilliant, original, and profound thinker in the world’s history.” (p. 21) Three periods of Plato are delineated. The early period is exemplified by the dialogues Euthyphro, Apology, Crito, and Protagoras. The middle period includes Gorgias, Phaedo, Symposium, and the Republic. The third period is then the dialogues Sophist, Politicus, Timaeus, and Philebus. On ethics, these periods are hedonism, “strenuous” morality, and a final readmission of some pleasures as an element in the good life.
Clark explains, “The term ‘Epicurean’ applied opprobriously is an unhistorical usage. Whenever we condemn indulgence in food and drink, we may say Epicurean, but we mean Cyrenaic.” (p. 87)

In his chapter on Stoicism, there is a passage which is of interest relative to Clark’s work on “Determinism and Responsibility” (1932) and his later work on “God and Evil” in a chapter in Religion, Reason, and Revelation. In a rare break in this volume from purely descriptive historical comments Clark provides some insight into his own view. He writes:

“Yet if all events are determined from all eternity including the decisions of the will, how can man be responsible for what he does? Does it not seem strange that the school which most insists on rigid determinism should be the ethical school par excellence of antiquity? How a man can be held responsible for an act which by necessity he must do may at first seem a difficult problem; yet we find the Stoics even condemning most men. The Stoics do not completely solve this problem, although it can be done by showing that responsibility is independent of freedom. The Stoics do, however, point the way to a solution. Man in a very special sense is his will; the decision of the will makes an act own’s own. We are responsible for what proceeds from our will, for such an act is our act, and whether we might have acted otherwise or not is irrelevant.” (p. 99)

In his chapter on Early Christianity, Clark writes,

“The astounding thing is that while the Greek schools in general appealed only to a select class of specially educated people and even with those usually failed of actual reform, as is pictured for us in Kingsley’s Hypatia, and while the comparatively wide appeal of the Stoics neither affected the masses nor stayed the corruption of the Emperor’s court, Christianity, within twenty-five years of its inception gave a totally new life to thousands and thousands.” (p. 121)

As there were a number of printings and even a second edition, Readings in Ethics must have found an audience, perhaps though as a required book at the university level.