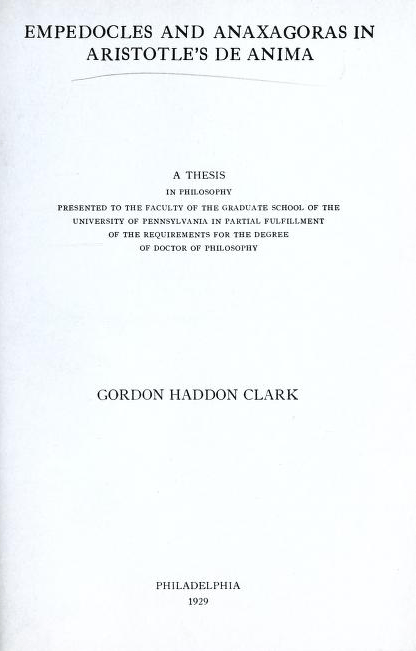 This review is the first in a series I intend to write on each of the published works of Gordon H. Clark. That is, I hope to summarize and comment on of each of his many books.
But first we start with Clark’s Ph. D. dissertation. Before he wrote any books for publication he completed his 1929 dissertation Empedocles and Anaxagoras in Aristotle’s De Anima for his Ph. D. in philosophy at the University of Pennsylvania.

Like many academic dissertations Clark’s was scarcely noted in the subsequent literature. Copies of it do exist however at nearly three score universities worldwide. I found one of these copies some years ago at the library of the University of Texas at Austin. At that point I had not yet realized that the dissertation (technically labeled as a thesis) is more easily accessible in a later published form—included along with other material in Ancient Philosophy (Trinity Foundation, 1997). Today also there is an online version accessible here: https://archive.org/details/empedoclesanaxag00clar

At only fifty pages long the dissertation seems rather short by today’s standards. Yet it is rather lengthy compared to the “one page poster” my own sweatpants-wearing philosophy professor at the University of Michigan required for one course’s final paper … er, final poster. It would be hard to conclude, from my own experiences anyways, that university quality standards have increased over the last century.

While Clark had articles published as early as 1923, Empedocles and Anaxagoras in Aristotle’s De Anima was his first lengthier writing to come available.
The preface to the dissertation opens with a passage fit for a philosopher:

“Save us, we pray from those who have so entombed themselves in the dark and damp of antiquity that they no longer appreciate the light of the present day; but save us all the more from those who go blithefully on their way in utter disregard of the lessons the past can teach. Why is it necessary to insist that the wise man should learn by the mistakes of others? Yet we do our forefathers great injustice if we think of them merely as makers of mistakes. Not only have they formulated an ideal for us and given us inspiration, they have as well, among their mistakes, laid the basis of our more exact science which short-sightedness alone would call emancipated from the past.”

In the preface also Clark credits a number of individuals. Among these are three of his closest professors (Edgar A. Singer Jr., William Romaine Newbold, and Isaac Husik) and two classical scholars (Paul Shorey and R. D. Hicks) whom Clark surely knew only through their writings.

As for the dissertation itself, it should be helpful to note first that De Anima is the Latin title of Aristotle’s treatise On the Soul (or Περὶ Ψυχῆς in the original Greek). Empedocles and Anaxagoras— who are among those mentioned in the text—were each pre-Socratic philosophers. It is my impression that so little of the writings of the pre-Socratics exist that to understand them scholars must look to later Greek philosophers who quoted from them or commented on them. Here Clark looks to Aristotle’s De Anima.

One question Clark focuses on is “How just was Aristotle in De Anima to the philosophies of Empedocles and Anaxagoras?” And, he asks, was Aristotle “reasonably trustworthy in his account of Empedocles?” It is on Empedocles that Clark then spends most of his time; allotting only a few pages of discussion to Anaxagoras. Following “a careful induction of the individual passages” Clark concludes that “Aristotle is very exact in his quoting” and that “It appears, therefore, even in the little so far covered, that Aristotle is as trustworthy as any historian can be expected to be.” Positively appraising Aristotle, Clark concludes that “Anaxagoras was philosophically impossible.” Likewise, he concludes that there was much confusion in the philosophy of Empedocles. In both Empedocles and Anaxagoras we see early stages of philosophical development where terms were unclear and where many questions were raised but few answered.

Of interest biographically, Clark mentions chess, the earliest reference he makes to this passion of his. Also of note is that Clark makes botanical references possibly influenced by his soon-to-be bride who was as that time studying botany at Pennsylvania.

While Clark was thoroughly involved in the church at this time in his life and here uses certain Christian phrases (“proving all things and holding fast to that which is good” – 1 Thess. 5:21) this dissertation fits in the earliest period of his writings where his focus was on Greek Philosophy. The next four books he then had published continue on this subject.

This series continues with the next review here.