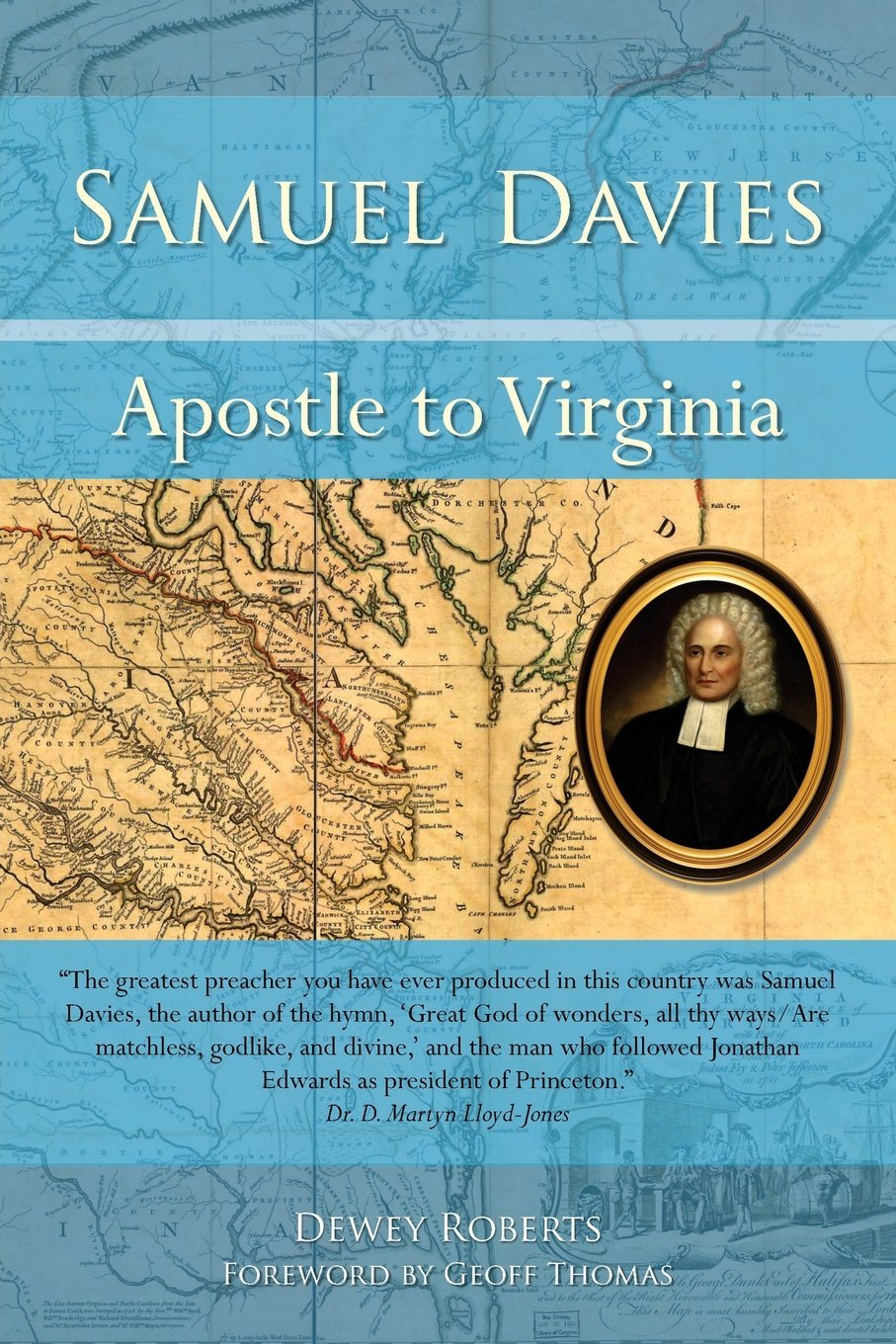 Samuel Davies, Apostle to Virginia by Dewey Roberts, Sole Fide Publications, 2017, 436 pp.
This is a thoroughly-researched and fascinating biography of Samuel Davies, a prominent but often overlooked 18th century American Presbyterian minister. In the preface, author Dewey Roberts lists ten “partial or brief” biographies of Davies that have been written through the years. His own biography, labored on as a passion for almost four decades, and taking advantage of modern data searching techniques, is certainly the most complete.
Davies (1723-1761) is often noted as an important Southern Presbyterian, but he was born in Delaware and was first a minister in the New York Synod of the New Side Presbyterian denomination. It was from the New Side ministers (particularly the Rev. Samuel Blair at Faggs Manor Academy in Pennsylvania) that Davies got his education.
Soon after his ordination though Davies does come South when he takes a call to Hanover, Virginia. There he is one of the first dissenter (i.e. non-Anglican) ministers in the colony. Pressing his case with the governor for the legal allowance of additional Presbyterian ministers in Virginia, the Act of Toleration is eventually ruled applicable to the colonies and freedom of religion is strengthened there.
The book makes it all too clear how the formalism and lack of gospel presentation in the established Anglican church led to poor morality and a considerable lack of true Christianity in Virginia. As Davies points out, the dissenting Christians were only secondarily concerned about matters of difference with the established church on such things as polity. The actual need for the existence of the dissenting churches, he argued, is because of a lack of adequate Gospel preaching in the established church.
One of the most interesting elements of Samuel Davies, Apostle to Virginia is the interactions described between Davies and a number of other prominent men of his time. First there was Gilbert Tennant who was God’s chosen instrument in converting Davies and with whom Davies later traveled to England to raise funds for the College of New Jersey. Also there was the prominent American minister Jonathan Edwards whom Davies wrote to and narrowly missed the opportunity to have join him in his labors for the Presbyterian church in Virginia. There was also Patrick Henry, who said he learned his renowned oratorical skills from listening to Davies preach. And Benjamin Rush, a student of Davies’ who later signed the Declaration of Independence and was the first Surgeon General. Davies also had connections with, among others, revival-preacher George Whitefield, Congregationalist minister Joseph Bellamy, and, on a trip to England, he met the Baptist theologian John Gill and the founders of Methodism, John and Charles Wesley.
Davies’ 18-month trip with Gilbert Tennant to England, Scotland, and Ireland is rightly given its own chapter. From the surprisingly large total of funds they were able to raise, one can see the care which the old world Christians had for the churches in the colonies. And, as the call for pastors to immigrate to the colonies remained a demand unfulfilled, it is interesting to learn of financial support willingly given to the College of New Jersey for the education of many who would become pastors.
From the town (and county) of Hanover Virginia, Davies helped organize the Presbytery of Hanover, which proves in history to be the parent presbytery of much of Southern Presbyterianism. In honor of this historically great presbytery, there is even a denomination today which goes by the name Reformed Presbyterian Church – Hanover Presbytery.
Other episodes in the book relate to Davies’ evangelistic labors with slaves, his efforts to recruit soldiers for the French and Indian War, a mission to the Cherokee tribes, and his stint as president of the College of New Jersey before his death at only thirty-eight years of age.
As for criticism, the book cannot be said to be a pure history as the author perhaps too frequently provides his own opinions on matters. This is particularly (but not exclusively) the case in the conclusion sections of each chapter which read like lessons learned from the respective chapter. Also, the author’s bias is strongly evident in his support for the New Side in the split of the Presbyterians in that period.
Nevertheless, the production of the book is considerably better than the vast majority of self-published titles. It is well-edited, nicely printed, and contains a detailed bibliography. Roberts should be credited with producing a fine work.