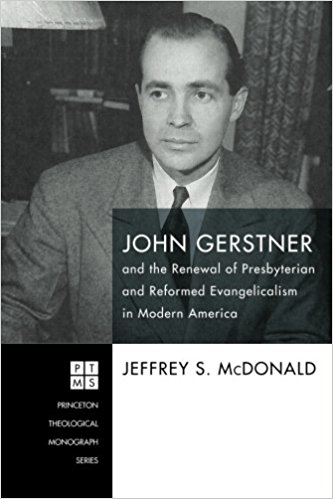 John Gerstner and the Renewal of Presbyterian and Reformed Evangelicalism in Modern America by Jeffrey S. McDonald, Pickwick Publications, 2017, 263 pages.
This, the first biography of the presbyterian theologian John Gerstner (1914–1996), is a valuable contribution to understanding a number of developments in the American Reformed and evangelical world in the 20th century.
Jeffrey S. McDonald’s book provides insights not only into the thought of John Gerstner, but of the history of various institutions Gerstner was involved in including the United Presbyterian Church of North America, (UPCNA), the Presbyterian Church in the United States of American (PCUSA), Pittsburgh Theological Seminary, and the Ligonier Valley Study Center.
Gerstner is seen to be largely influenced by his professor at Westminster College, John Orr who was in turn a student of Princeton’s B. B. Warfield. It is from Orr that Gerstner learned the “classical apologetics” which he retained even while a student of Cornelius Van Til at Westminster Theological Seminary and continued to argue for throughout his career. Gerstner’s main interest though was the theology of the 18th century theologian Jonathan Edwards. McDonald notes a number of times that Gerstner believed that Warfield’s Old Princeton was a theological descendant of Edwards. With McDonald and a number of scholars he cites, I must disagree with Gerstner’s theory on that point.
Gerstner is seen to be quite stubborn through failures. More kindly, as McDonald says, he had “resilience and a preserving spirit”. The biggest failure for Gerstner was not for any fault of his own – the merger of his beloved United Presbyterian Church with the liberal PCUSA in 1958. Gerstner, though conservative, stayed in the newly merged denominations for four more decades, until finally leaving for the conservative Presbyterian Church in America (PCA) in 1990. His “resiliency” is also seen in his staying on as a professor at Pittsburgh Theological Seminary despite its growing liberalism. Gerstner also persisted, though without the success he desired, on his work on Jonathan Edwards.
In his later decades Gerstner’s influence grows through his work at more conservative institutions like Trinity Evangelical Divinity School (TEDS) and the Ligonier Valley Study Center. There, at Ligonier, Gerstner’s work with his former student R. C. Sproul has proven to be his most lasting legacy. With Sproul’s recent passing, this volume on his colleague John Gerstner is timely.
McDonald did considerable research as proven by the copious footnotes listing archival sources and personal interviews he conducted. His own theological position or bias was not obvious to this reviewer. Unfortunately for McDonald (and my neck), the copy of the book I received from the publisher attached the first 128 pages upside-down and backwards.