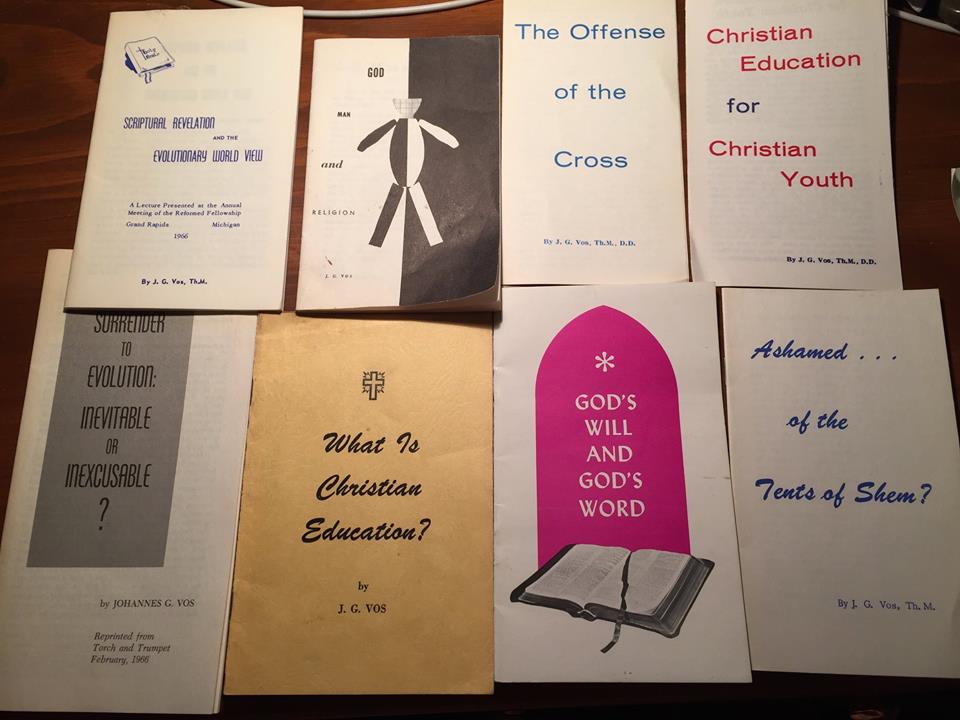 Johannes G. Vos (1903-1983), one of three sons of theologian Geerhardus Vos, was the founder of the journal Blue Banner Faith and Life and was for many years (1954-1973) a professor at Geneva College in Beaver Falls, PA.
I recently acquired eight short pamphlets, seven of which were written by Johannes G. Vos. Here are some notes on their contents:
Surrender to Evolution: Inevitable or Inexcusable?
This pamphlet is reprinted from Torch and Trumpet, February, 1996. Vos doesn’t directly answer his own question, but his positions are clear. Among other points, he notes that evolution is premised on naturalistic assumptions and over-extends the proper phenomenological realm of science. Theistic evolution, he contends, cannot make sense of the Hebrew distinction between “bara” (God’s creative acts) and “asah” (the general verb for “making”). It is interesting that back in 1966 he refers to the claim of some scientists that they will “soon” create life in the laboratory from non-living matter. It is now over fifty years later and this unsolved problem, one would think, should be a scandal for the evolutionist.
Christian Education for Christian Youth
“Because we are persons we need education.” Vos notes that “educate” comes from the Latin educo, which mean “to lead out.” And it is this “leading out” — bringing out a persons possibilities and enabling him to become a better, more effective person — that, Vos contends, is the goal of education. That is, we do not educate in order to get ahead of the Russians in the space race (which surely dates this article to the 1960s), or to be trained for a job and earn money. This “is reducing people to the sub-personal, sub-human level, and is turning people into mere machines to grind out work for the all powerful state.” Christian education, Vos contends, is not secular studies plus a few Bible courses, but has “faith in God” as its basic guiding principle. He writes that his own Geneva College is trying to become “a better, more radically, more consistently Christian college.”
The Offense of the Cross
This is the shortest of the pamphlets I received and it might more accurately be considered a gospel tract. Vos shows his orthodoxy in noting the “substitutionary atonement.” He contends that it is the “offense of the cross”—punishing the sinless Christ in order to save sinners—that distinguishes Christianity from all counterfeit religions.
God’s Will and God’s Word
This is the only of the pamphlets which was not written by Vos. Rather it was written by R. B. Kuiper and published by the Committee on Christian Education of the Orthodox Presbyterian Church.
Kuiper addresses the question “How am I to know the will of God concerning my life?” God’s will, Kuiper contends, is known only “by His Spirit through His Word.” In additional sections he argues against other methods of ascertaining God’s will—human tradition, the individual conscience, pious soothsaying, an abbreviated Bible, presumptuous mysticism, and providential guidance.
This is good material. I had concern that it would devolve into another of Kuiper’s writings that support the error of the “Well-meant offer of the Gospel” on the basis of multiple contradictory wills of God.
Ashamed . . . of the Tents of Shem?
This pamphlet was written to help Christians to better love singing the Psalms. Vos was an ordained minister in the Reformed Presbyterian Church North America – a historically psalm-singing denomination. Yet this pamphlet does not go so far as to advocate exclusive psalmody. Vos connects the prophecy that the Japhethites will dwell in the tents of Shem with the fact that non-Jewish peoples have come to worship the Biblical God. He writes, “Our religious heritage has come to us from the children of Israel, the children of Shem.” He argues that we shouldn’t abandon this heritage and we shouldn’t abandon singing the psalms. He critiques the reasons some do not like to sing the Psalms, and concludes that the Psalms must be sung and loved as they are an integral part of the Christian Faith.
Scriptural Revelation and the Evolutionary World View
The article in this pamphlet, it is noted, was a “Lecture Presented at the Annual Meeting of the Reformed Fellowship” in Grand Rapids Michigan. 1966 is either the year of the lecture or the year of the publication.
Here Vos again takes up evolution. He believes that it is incompatible with Christianity. He notes that it is a popular zeal not for truth but for eliminating God that led to Darwin (who he says was an atheist) selling far more books than his contemporary Mendel (who was a Christian). Evolution is opposed to teleology and is based solely on irrational chance. Vos writes, “To say that something is caused by chance is to say that it has no cause.” Evolution leads to immorality.
Perhaps my favorite quote of Vos is as follows:

“Here in America our public education system, from kindergarten to university, is deliberately being made more and more secular. At the same time our sages and experts stand aghast at the boldness and increase of evil.”

Vos’s whole article here is quite good. He focuses on moral and Biblical arguments against evolution. They are solid arguments, but I would also like to see philosophical, scientific, and biological arguments to add to the case for those who unfortunately have no concern for the Bible or for objective morality.
Interestingly, Vos notes “I once accepted Ussher’s chronology, but later gave it up.” He says that “Ussher’s scheme rests upon unwarranted assumptions.” He speaks favorably of Warfield, Bavinck, and Augustine and seems to think that the world, though perhaps not billions of years old, is certainly older than Ussher’s figure.
What is Christian Education?
Vos calls Christian Education that which has the “unifying principle” as “the historic Christian view of God, man and the universe in the mutual relations.” He addresses the question “Why is Christian Education Needed?” in saying that it is to fulfill the commandment to “love the Lord thy God … with all thy mind” and to “give expression” to the “radical difference which exists between … the regenerate and unregenerate.” Christian education, Vos contends, is not an add-on to secular education, but an education which is Christian in its “essence or inner character all along the line” and based on the authority of God’s revelation in the Bible.
God, Man, and Religion
Vos writes “In academic circles there is a good deal of emphasis on objectivity.”  Oh the relatively good old days of modernism, before the current plague of post-modernism in the acadamies! Fifty years later and relativism reigns over objectivity. Vos, while certainly not a post-modernist writes, “really objectivity is impossible.” He contends,

“All thinking, all writing, all discussion, is carried on from some point of view, whether this is recognized or not. All thinking is based on assumptions. The question is not whether we shall have basic assumptions, but what our assumptions are and whether we are consciously critical of them or not.”

I must think that Vos must have been quite familiar with presuppositionalism. Living in Pennsylvania he wasn’t far geographically from Westminster Theological Seminary and their Professor Cornelius Van Til. Later, in the 1970s, Vos would have some positive interactions with Gordon Clark.
Vos argues that there are basically two views in religion: God is ultimate or man is ultimate. That is, there is “Biblical Theism” and “Consistent humanism.”
Reflecting the time of the writing, Vos writes, “The present headquarters of consistent humanism is the Kremlin of Moscow, and the outreaching arms of this poisonous, idolatrous man-worship are found in the subtle instruments of Communist propaganda throughout the world.
All middle-of-the-road philosophies devolve into humanism. Though Vos doesn’t use the term “Arminianism,” he contends, “The middle-of-the-road view regards God as limited by man’s free will.”
Consistent theism, Vos concludes, “regards the accomplishment of salvation as a work of God” and this is for the purpose of manifesting God’s love and His righteousness for God’s glory.