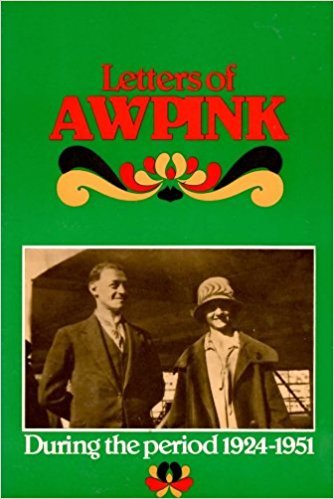 Letters of A. W. Pink, During the Period 1924-1951, Banner of Truth Trust, 1978, 135 pp.
For those who don’t know anything about A. W. Pink (1886-1952), I might note briefly that he was a Christian minister who largely left preaching to take up a writing ministry –  a newsletter he founded called Studies in the Scriptures. These writings were also published as commentaries (titled “Gleanings”) of various Biblical books. Pink is known for his thoroughgoing Calvinism (which he came to accept after rejecting his earlier training in dispensationalism).
You cannot read Pink and not be moved by his Christian humility, learnedness, and outright dedication to the Scriptures. He maintained a strict practice of reading and studying the Bible. With his library “weighing over half a  ton” (p. 48), I must conclude as accurate his own assessment of having read “1 million pages of religious literature.” (p. 74)
Yet, from what little I know of Pink, I must be concerned about him as an example of a Christian’s relationship to the church. Pink pastored a number of churches, but never for a very long period. When he finally settled back in the U. K. (after years in the U.S.A. and Australia) he struggled to find any church with which he could associate. His relative retreat from the world to a life of study and writing was made possibly by an inheritance he received from his father.
Lack of church attendance and membership is a concern I have for many Christians today. Like Pink, they often believe virtually all the churches are corrupt and on that basis excuse their lack of attendance. My opinion is that since all people are sinners, and the church is a gathering of people, then there naturally will be corruption in the church too. But this does not mean that one should scorn church anymore than one should scorn their own family which also is made up of sinners. All the more do people need church because they are sinners. (Yet, lest anymore misinterpret my meaning here, I am not claiming that church attendance or membership is necessary for salvation.)
Now, some “gleanings” from the book itself …
AGAINST PREMILLENNIAL DISPENSATIONALISM
“It is the ‘premillennial’ doctrine which I am now considerably out of love with. … As I studied the lives of early ‘pre’s’ and observed those of the present day—comparing most unfavorably with the godly Puritans—my suspicions became more and more aroused. … the next thing which struck me most forcibly was the total absence in the four Gospels of any reference to a millennial reign of Christ on earth.” (p. 29)
“With few exceptions, all of the notes and comments in the Scofield Bible are unreliable and unsound.” (p. 38)
“The Plymouth Brethren originated about 1830 through J. N. Darby. For fifteen years I was misled by much in their writings, but after I began to study the Puritans, I soon discovered how far they were astray on almost every doctrine; and today I have no hesitation in saying that the writings of J. N. D. and C. H. M. [Mackintosh] are full of error, although in a very subtle form, which can only be detected by one having a deep and wide grasp of the truth.” (p. 65)
FOR SUPRALAPSARIANISM
“I have finished reading through the volume you kindly brought me by Thornwell and later, D. V. would like to see the companion volumes. There are some excellent things therein, yet some I do not like. He is faulty, to say the least, in his discussion of Repentance—pages 37-39. I will not enter into detail about his analysis of supra- and sub-lapsarianism; his last sentence of his first paragraph on page 24 exhibits the weakness of his system—a purpose to glorify himself, rather than ‘a purpose to save‘ was the starting point of God’s decrees! The supralapsarian system makes God the beginning, centre and end thereof; whereas sub-lapsarianism makes Man the centre and circumference.” (p. 55)
“I trust you will not be pained should I take exception to, or differ from, any of the positions taken by Dr. Girardeau. I fear this is likely, for I am a strong supra-lapsarian, and in my humble judgment, any one who is not firmly fixed there is bound to go astray in his subsequent thinking and postulates. I have not arrived at that conclusion hurriedly, in fact was not confirmed therein till after twenty years of continuous study.” (p. 74)
ON GOD’S WILL
“What then am I to do? Wait on God and ask him to make his ‘will’ clear? But what good would that do? We are only brought back to our first query of ‘How is his will to be ascertained by me?’ Perhaps you reply, ‘Suppose after such praying I was unexpectedly to receive a gift of $50 or a rise in salary, would not that be clear intimation that God wanted me to buy the suit, and was here providing the money for it? Not necessarily; he might thereby be testing you! No, the better way would be to ask him to give you good judgment, and act on it.” (p. 90-91)
REVIEW
Though the book is subtitled “During the period 1924-1951” a majority of the letters are from the far narrower period of 1934-1937. Thus, while Pink’s pastoral counseling is evident in each letter, the collection is from too limited of a window of time to make much biography of the man himself.
As the book was published by “The Banner of Truth Trust,” which has proven itself neither truthful nor trustworthy in butchering a later edition of Pink’s The Sovereignty of God, one wonders whether the letters in this collection were also culled to avoid printing that with which the publisher disagreed.
Even if the publisher is suspect, Pink’s theology is solidly Biblical and Calvinistic. His letters are a valuable addition to his published writings all of which so often contend for the importance of each and every word of the Scripture “selected with divine discrimination and precision.” (p. 115)