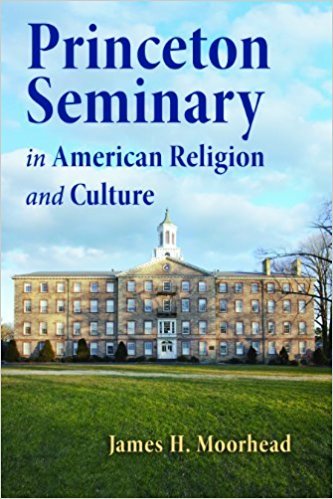 Princeton Seminary in American Religion and Culture, by James H. Moorhead, Eerdmans Publishing, Grand Rapids, MI. 2012. 548 pp.
While I must disagree with and vehemently oppose the theological perspective of James Moorhead as evidenced in Princeton Seminary in American Religion and Culture, I believe he has here written an excellent book.
For those, like myself, who have read the history of Princeton seminary (and the Presbyterian churches intertwined with it) mostly from the perspective of the conservatives of the Orthodox Presbyterian Church (including Machen, Rian at the time of his writing, Stonehouse, Dennison, Hart, and Muether) Moorhead’s book tells the other side of the story. Or, at least, it provides another perspective.
Part of this perspective I must agree with – Princeton seminary post-1929 (that is, post split with Westminster Theological Seminary) was not a modernist school. Many of those who opposed Machen’s formation of WTS and the OPC were conservatives. They just merely were not controversialists or separatists. One might contend that they weren’t therefore fully conservatives. But, realizing that the OPC drew away less than 1% of the churches and ministers of the PCUSA helps to put into perspective Moorhead’s description of Machen as an “ultra-conservative.”
But the arguments of Cornelius Van Til against Karl Barth (and against Princeton Seminary) prove true as Princeton further and further departed from the historic Presbyterian faith. From Machen and company’s departure in 1929 until about 1936 it might be said that Princeton was still a conservative institution. But with the hiring of John Mackay as President in 1936 and his subsequent hiring of professors nearly all of whom were sympathetic to Karl Barth, it is evidenced in Moorhead’s book (opposed to his actual contention of “continuity” with Old Princeton) that Princeton went not liberal, but neo-orthodox. Later the seminary moved from neo-orthodoxy to a pluralism, an almost anything-goes approach to theology. The horror of the anti-Biblical approach is seen, for one, in this statement from Moorhead: “[Professor James E.] Loder sought to correlate the theories of human development by psychologists such as Sigmund Freud, Erik Erikson, and Jean Piaget with theologians such as Kierkegaard, Karl Barth, Wolfhart Pannenberg, and Thomas F. Torrance.” (p. 483) What a cast of characters!
I admit that this was my goal in reading Moorhead’s book – to understand how we got from conservative Old Princeton to today’s theological hodge-podge there. My suspicions of Barthianism’s influence were verified by explicit Moorhead statements about professor’s who had studied with and largely agreed with Barth on various doctrines. My suspicions were further verified in Moorhead’s descriptions of the various professors positions which I found to be heavily Barthian.
But to return to the book itself, here were some of my observations …
1. The book was very well written. As evidence, I’d like to quote from the beginning of chapter 2:

“IN ITS FIRST years, the seminary was the lengthened shadow of two men who had led the movement to create a theological seminary. They were products of two very different worlds. Archibald Alexander came from the Shenandoah Valley and counted rural Virginia as home even after he had gone elsewhere. … Samuel Miller, though reared in rural Delaware as the son of a preacher who also farmed, nevertheless seemed less a man of the country than of the city.” (p. 28)

2. The book is front-heavy. That is, Moorhead spends far more time on the early Princeton professors than on the modern era. The first 5 chapters, in fact, get us only from 1812 to 1837. From my perspective this is all well-and-good, for it is enjoyable to read about the 19th century saints, and painful to read about the 20th century departures from historic orthodoxy.
3. Moorhead takes too many opportunities to criticize Scottish Common-Sense Realism. But while often pointing out problems with that philosophy (and here I generally agree with Moorhead’s criticisms) he does a fantastic job in explaining the philosophy itself. In fact, Moorhead is really the first source I’ve read that explains Common-Sense Realism rather than just using the term. So I found the book valuable for that.
4. I greatly appreciated the history of William Henry Green. I had previously considered 19th century Princeton to be primarily the chain of Alexander-Hodge-Hodge-Warfield. But now I would definitely put Green in the mix for his important place in the history.
5. I found interesting the account of the battle (c. 1910) over whether to have elective courses at the seminary. I had previously read nothing about this. This situation perhaps foreshadows the later controversies of the 1920s/30s in seeing a conservative faction develop in arguing for the existing curriculum and a more liberal faction desiring greater freedom of electives. Regarding this battle, I must only say that those who disparage “theory” in favor of “practice” often fail to realize that theory is “theory of practice.”
6. As mentioned above, Moorhead tries to show continuity between Old Princeton and modern Princeton. I found this to be a grasping at straws. He writes, “this brief overview underscores why he [Mackay] could boast that ‘strong tides of thought are running in the direction of Princeton’s historic position.’”(p. 401) And “Mackay’s vision for the seminary stood in continuity with that of the older Princeton.” (p. 419) Nonsense. I’d argue that modern Princeton is 20% like Old Princeton, but that Westminster Theological Seminary is perhaps more like 70% like Old Princeton. (Westminster departed from Old Princeton as well, especially in apologetics.)
7. Machen is virtually vilified, while Mackay is given honor in multiple chapters. It is here in particular that Moorhead’s bias shows, and the “history” becomes less so.
The history of Princeton seminary is an indispensable topic for the Presbyterian student. Reading Princeton Seminary in American Religion and Culture (a commitment at over 500 pages) provides the history of the seminary along with the parallel history of both the Presbyterian Church and America as well. Moorhead’s scholarly work, even with inevitable bias showing significantly, is a valuable book to read.