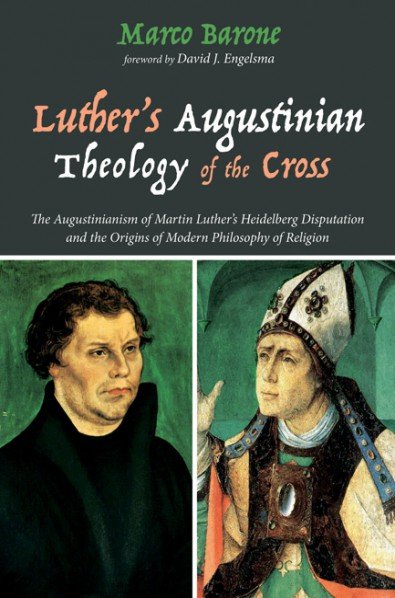 Luther’s Augustinian Theology of the Cross, by Marco Barone with foreword by David J. Engelsma. Resource Publications, Eugene, OR. 2017. 141 pp.

For first thirty years of my life I was a member of the Lutheran Church – Missouri Synod. Though I am now a licensed Presbyterian minister, I have retained a great interest in and love for the writings of Martin Luther. Barone’s Luther’s Augustinian Theology of the Cross, focused on Luther’s Heidelberg Disputation, was a welcome return for me to Luther after some years away from his writings.

At 141 pages this book is the length that nearly all books should be, with a shortness that forces brevity. It is evident from the quality of the writing that Barone spent considerable time and effort working out his thoughts on the subject and bringing the book to publication. If the book reads at times like a dissertation that is because it was a dissertation for Barone; for a master’s degree in philosophy at Mary Immaculate College in Limerick, Ireland.

Barone’s introduction clearly describes the goal and path of the book. His goals are repeated a number of times throughout the book, so that even a person like myself with occasionally poor reading comprehension cannot miss the main points. The book has two major contentions: (1) Martin Luther’s Heidelberg Disputation is essentially Augustinian in nature, and (2) that a specific “Lutheran philosophical thesis”—that all philosophies in which man is not absolutely dependent on God lead to a moralism of man seeking to reach God by human works—is confirmed in the results of the philosophies of Leibniz and Kant (as well as those of Aristotle and Pelagius before Luther’s time).

In the first five chapters Barone works through each of the 28 points of the Heidelberg Disputation explaining the Luther-Augustine connections. He has chapters on “Free Will” (points 13 through 18), “The Law of God and the Works of Man” (points 1 through 12), “The Righteousness of God” (points 25 through 28), and “The Glory and the Cross” (points 19 through 24). Although he does mention at least one difference between Luther and Augustine—Augustine’s “infusion” vs. Luther’s “imputation” of righteousness (p. 9)—I would like to have read more about the differences. Showing that Luther came to understand the “righteousness of God” as “the passive righteousness with which the merciful God justifies us by faith” independent of reading Augustine, but yet in agreement with Augustine, Barone shows that Luther was not slavishly dependent on the African father. (p. 8) He points out that Luther regularly quoted from Augustine, was an Augustinian monk (p. 4), and referred to Augustine as St. Paul’s “most trustworthy interpreter” (p. 3). Where Luther does not explicitly quote Augustine, Barone argues, Luther is often clearly influenced by Augustine. His case is convincing. Luther’s Heidelberg Disputation is an Augustinian document.

While the first five chapters focus on the first contention, the sixth and final chapter addresses the second contention, the more important of the two. Luther’s thesis itself is described: “any ethics set forth independently of a consistent understanding of Christianity is basically constructed on an Aristotelian or Pelagian foundation.” (p. 57) and “any theology or philosophy that attempts to ascribe part or all of the work or part or all of the merit of redemption and enlightenment to the autonomous power or will of man is a form of Pelagianism. This means that it does not properly understand the reasons for and the implications of the cross, and it is a ‘theology of glory.’” (p. 102) Barone’s contribution is to show how two philosophies, those of Leibniz and Kant, confirm the truth of Luther’s thesis. The two examples, however, point to the fact that all non-Biblical philosophies fall into the same error. Specifically, he contends, “Beyond the philosophy of the cross, there is nothing but Pelagianism.” (p. 107)

The difference between Luther’s “Theology of the Cross” and the less-than fully dependent on God “Theology of Glory” is handily summarized in a table on page 107. 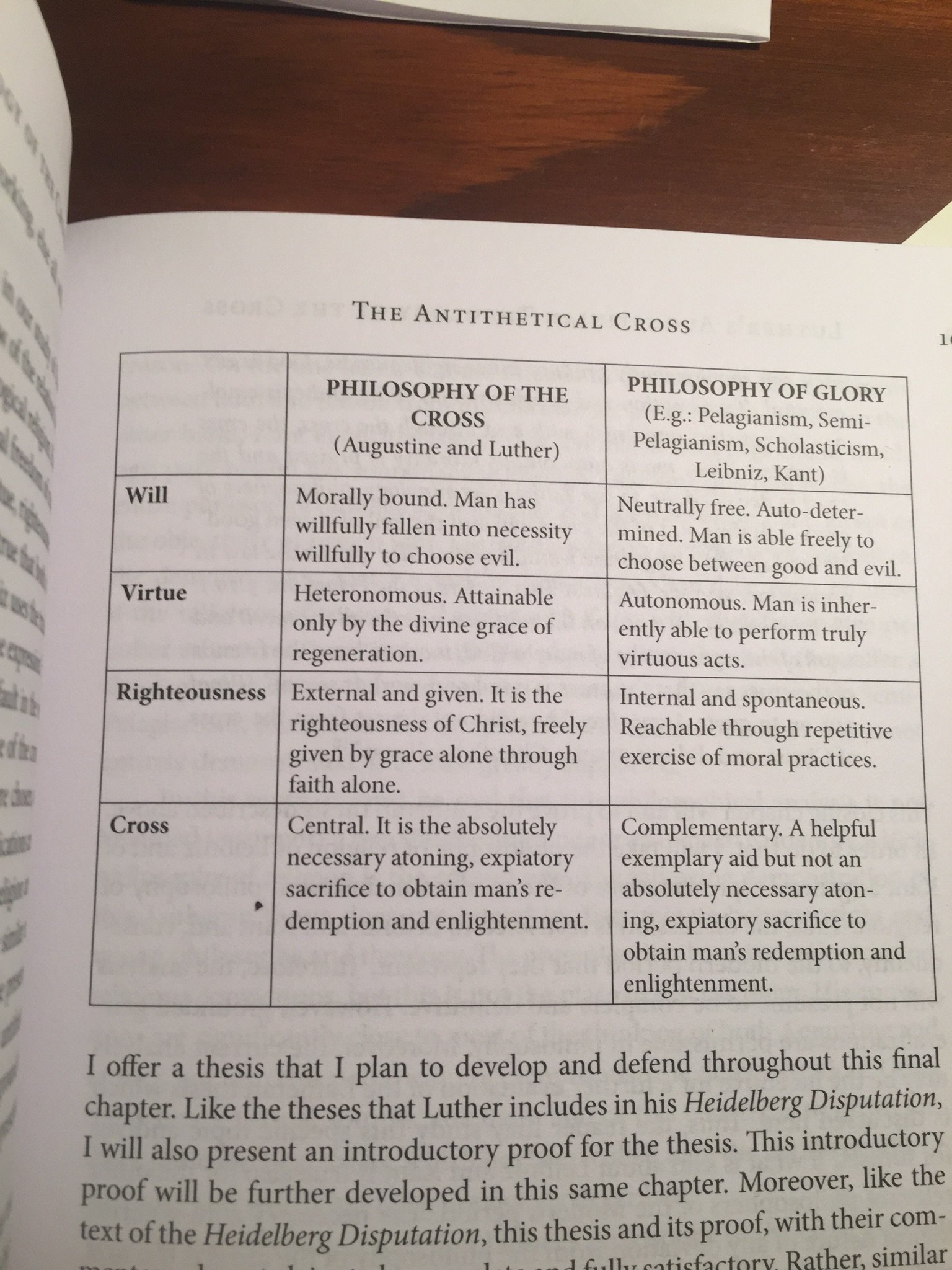 Naturally, neither two examples (Leibniz and Kant), nor five examples (Leibniz, Kant, Aristotle, Scholasticism, and Pelagius), nor even a thousand examples prove the contention. Barone admits as much saying his “thesis and its proof” … “do not claim to be complete and fully satisfactory” but rather “are intended to be an intellectual stimulus for further discussion.” (p. 107) However, as Barone claims, “When God is not the only one at work, man is.” (p. 107) That is, there is no tertium quid, no third option. If this is correct—that there is no third option—then Barone’s contention is correct. Whether it is correct or not (and I think it is), we Christians know of salvation by grace through faith, and so need not seek for any other salvation, whether of our own accord or in anything other than Jesus Christ. Luther’s Augustinian Theology of the Cross is a good warning against all soteriologies which attempt to give man any of the glory properly belonging to God. I pray that many Arminians will read this book.

1 thought on “Review of Luther's Augustinian Theology of the Cross”