Not only were pastors at work in the early years of Dillingham Presbyterian Church, but women missionaries also played a key role. Of a number of women who came to serve as Sunday school teachers at Dillingham, it is Miss Bertha Abernethy who is most well known. This can be attributed to her having been at Dillingham for many years reaching even into the youth of some current church and community members.
The Reverend R. P. Smith recounted the value of missionary ladies sent by the Home Missions Committee in his book Experiences in Mountain Mission Work (1931).

“As we investigated and studied conditions, it became more and more evident that we should emphasize secular and Christian education in starting work on mission fields. First, a day school for the children; second, a Sunday School for the children and their parents; third, preaching services for all in the community.”- p. 34 “On a visit to one of our mission points I preached to a large congregation on Sunday. At the closing of the services I explained to the people that we did not have minister enough to send and give them preaching services regularly. A good honest man in the audience rose to help and comfort me. He said: ‘We like to hear you fellows preach, and I am not saying anything agin ye, but if we can’t git both, send us the women teachers. These women teach our children books and good manners during the week and on Sunday they teach us the teachers, we can git along mighty well for a good while yet just with them doing the work.’ To which I heartily agreed and sent the teachers.” p. 47

Born in Mecklenberg County to Madison and Elizabeth Brown Abernethy, Miss Bertha (Dec. 31, 1883 – 1955) first appears in the records in 1898 as the secretary of the Children’s Band of Earnest Workers at Steele Creek Church. She later graduated from Presbyterian College, now Queens University in Charlotte, NC and taught at the Old Dixie School back in her hometown of Steele Creek, NC. She came to Dillingham in 1906, the same year the Old Dixie School was closed, and largely remained in Dillingham until some time in the early 1940s.
Miss Bertha, who never married, did work also as the Principal of the Ebenezer Mission (for at least the years 1911 – 1913). It is this famed mission which was the setting of “Cutter Gap” in the popular novel “Christy.” The lead character, “Christy,” in real life Leonora Wood Whitaker, went from her home in Dillingham to the Ebenezer Mission herself in 1909. It might have been Leonora who encouraged Miss Bertha to also work there.
Sometime after Miss Bertha returned to Dillingham, her Aunt Rena Brown came to live with her and also work for the church.
Miss Bertha worked at the church, for a time living in the Manse. She also taught school at the no-longer-existing Chesnut Grove / Dillingham School House.
Today a quilt made for Miss Bertha when she retired and left Dillingham is still in good condition, now belonging to one of the members of the church.
Miss Bertha’s own memories of mountain work were recorded in an article in 1945:

Vol. XXXV. June, 1945. No. 6.
Former Worker Writes Of Personal Experiences
Miss Abernathy Contracted “Mountain Fever”
(We asked Miss Bertha Abernathy to write us. She pioneered with Dr. R. P. Smith in the first decade of
Asheville Presbytery. Editor.)
I fully realize that there is work to do for the Lord at any spot in this world, but as for me, I would always wish my work could be done in God’s wonderful mountains. It is there that I feel nearer to Him who made them. I got my first knowledge of this in 1906, when after having chills, I sought work for the summer in the mountains of Western North Carolina, hoping to get rid of the chills. I did that very thing, but I contracted “mountain fever” which I have had ever since — now in 1945.
Dr. R. P. Smith sent me to Barnardsville, N. C, for a three months’ summer school, which was held in the Presbyterian Church there. It was situated on a hill overlooking the village. By the time I climbed the hill, and pulled the rope which rang the bell, I was completely out of breath. But O, what a wonderful view I had from the door of the church as I caught my breath!
I boarded in the home of Mr. and Mrs. Theodore Steppe, where I was treated with the greatest kindness by the Steppes and all the people in the community. I did not complete the three months — June, July and August — for it was arranged that I should assist in the public school at Dillingham, where the Presbyterian minister was the principal, since the public schools were given longer terms — these three months’ summer schools were being discontinued. So public school work — with the spiritual interest of my pupils, the Sun-day schools of the churches of the community on my heart — was my line of business for a number of years.
Thus, until about 1928, Buncombe County was my paymaster, except the few years I taught in a mission school in Tennessee. I am sure that I did not show the interest in the spiritual life of the community as my Master would have had me do it. If I could do it all over again, I would do everything very differently. A greater part of the time I boarded in the homes of the community, which I enjoyed very much. Of course, they cooked things differently to what I was accustomed — but the way we cooked was strange to them also. But how I did enjoy their “eats”!
About 1922 I built a little home at Dillingham. My mother had died in 1920. My aunt Rena Brown came to live with me. After five years in this home, it burned down one night while we were at prayer meeting. About two and a half years later my aunt fell and broke her hip, and I went to my uncle’s to nurse her. Shortly Dr. Dendy arranged for us to come and live in the manse as hostesses. Again the Home Mission Committee was my paymaster. We lived in the manse about five years, when the Dillingham Church called a pastor. Since then I have lived with my aunt in Steele Creek, near Charlotte.
So many seem to think that the people who live in the mountains are quite different from other people. But as I see it, there are the same traits in people wherever I go. I find some faithful to God, and some unfaithful. I feel that the way we have all failed is not being more and more in love with Jesus, and not being trained to think of giving as a privilege — an honor — a part of worship.
There are two things which I enjoyed most of all. The first was visiting in the homes. To be able some blight, clear morning to start up one of the creeks and drop in at every home for a few minutes — to happen at one just at meal time — to me was a great delight. I realize now that I did not talk enough about the Bible while on these visits. Another thing I especially liked to do was to sit down at the church organ and play for our folks to sing — and how they liked to sing!
One year when I was teaching the primary department at Dillingham Public School, I had 47 children on my roll by the name of Dillingham. That changed greatly, for I had only a small percentage by that name the last year I taught.
So many things have changed. When I first went there, we rode about a half day from Asheville to reach Dillingham in a bugey or hack. Now they have regular buses, and can make the trip easily in an hour. But with all the material changes, God does not change, and longs so for our love — wants to be first in our lives. Ruskin says that one thing God will not put up with in our hearts is — second place.

An entry in the Missionary Survey, June 1913 (p. 612) written by Miss Bertha introduces the Ebenezer Mission: 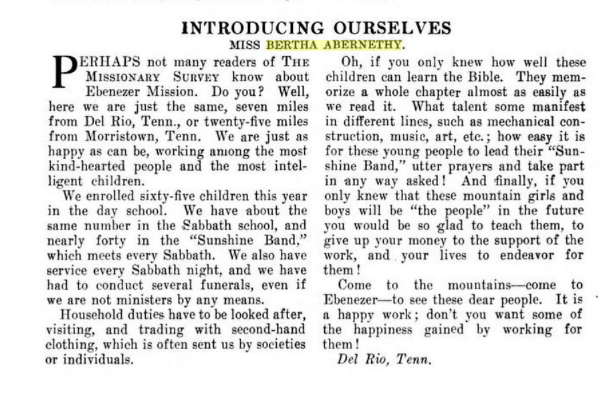 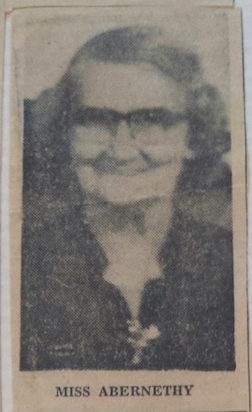 1 thought on “One of Dillingham's Missionary Ladies – Miss Bertha Abernathy”