A number of people have asked, “What were Gordon Clark’s views on creation?” That is, was he an old-earth creationist or a young-earth creationist? (It is clear that he wasn’t a theistic evolutionist.) His views on the matter, if published, have escaped my noticed. But now I’ve found a relevant note from his papers, showing his position for at least that particular moment at which he wrote. This comes from Clark’s notes on the Westminster Confession of Faith, written in about 1943.
Clark writes,

Men were created not more than 10,000 years ago; but [there is] no indication when the material universe was created.

Well, that is the main quote of interest. Below is the whole relevant section for those who are interested: 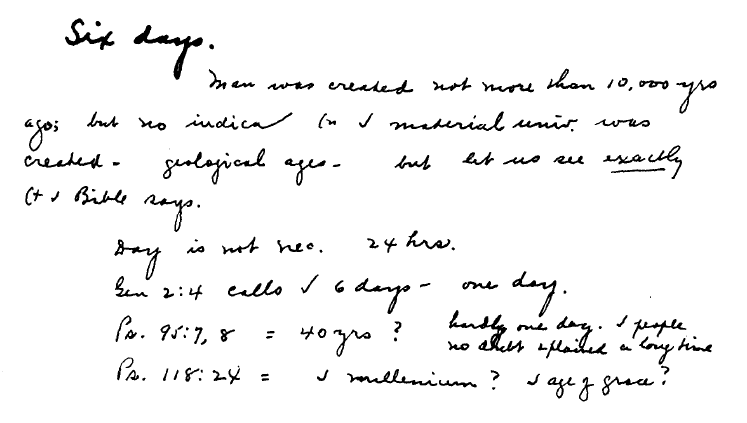 “Now, as for creation, science makes it almost impossible to believe that the world was created in 4004 B. C. But then, the Bible does not say that it was. Bishop Ussher said so, and good man though he was, he might have been mistaken on this point. The Christian position is that the Bible—and not the Bishop—is infallible. The chronology of the early Old Testament is exceedingly difficult to decipher, and when it comes to the creation of the world, there is no chronology given. Let us not insert one between the lines.”
“What evidence is there that the world was not created only last week? Yes, that is right, only last week, or even yesterday. Presumably either God created the world or it is the result of chance. It is hard to think of any other alternative. Now, if God created the world, might he not, since he is omnipotent, have created trees with rings in them, rocks with fossils in them, and human beings furnished with ready-made memories? In this case the world could be exactly as it is now and not have existed five minutes. But suppose there is no God and chance is the basis of the universe. The argument for chance has it that in an infinite time all possible arrangements of atoms takes place, and this is one of them. But if all possibilities are eventually realized, may not this world be the one in which the cosmos arranged itself this way just yesterday? Scientists who neglect the statements of revelation have logical difficulties too, worse difficulties than Christians have; and they do not face their difficulties nor some their problems by trying to laugh them off.”
“Then there is the matter of six creative days. Does the word day necessarily mean twenty-four hours? In English, day most frequently means about twelve hours. We also say that there were no telephones in George Washington’s day. Further, Genesis 2:4 seems to refer to all six days as one day. And again, can we speak of six day of creation when the first chapter of Genesis uses the verb create only three times? Bernard Ramm has written a very interesting book, The Christian View of Science and the Scripture. I cannot agree with some of the things he says, but it is worth reading.”