E. Mac Davis a.k.a. Edmund McMillan Davis (June 21, 1869 – August 6, 1905) was the founding pastor of Dillingham Presbyterian Church. The son of Alexander and Emily Jane (McMillan) Davis, he first made a public confession of his faith in the First Presbyterian Church of Knoxville at the age of fifteen. He earned a B. A. and was class valedictorian in 1890 at the University of Tennessee. In 1892 he earned an M.A. from the same school and was an instructor of Latin and English there from 1890-1893. He then studied at Union Theological Seminary* in Richmond, VA and graduated from Princeton Theological Seminary in 1896. Thereafter he returned to the University of Tennessee as an instructor of Hebrew History and Literature (1896-1897). In 1897 Davis began his pastorate at Dillingham Presbyterian Church and remained there until 1904. From there he took a pastorate in McDonough, Georgia (in the Atlanta Presbytery) but died young the next year from “mental and physical exhaustion after a week’s meeting in the hot weather.”

Following the founding of Dillingham Presbyterian Church in 1897, and his marriage to Miss Janie Watkins Carrington of Sunnyside, Virginia in March 1899 (with whom he would have one son and two daughters), Davis next appears in the record making a request for needed items for the people of the community; specifically for used text-books and barrels of children’s clothing, as shipping by barrel was cheaper than box. (Presbyterian Standard, Charlotte, May 18, 1899. Vol XLI, No. 20.) The same source notes that Davis conducted religious services at “Barnardsville, Democrat, Dillingham, Terry’s Fork, Paint Fork, Sugar Creek, Rock View and Carson’s School house.”

Synod minutes note that Davis was the first to reside in the manse of Dillingham Presbyterian Church. They read, “The manse at Barnardsville has been completed, and Brother Davis is occupying it.” (Minutes of the Eighty-Eight Annual Session of the Synod of North Carolina, Held and Charlotte N.C., October, 1901. pg. 422-423)
Like his predecessor R. P Smith, E. Mac Davis noted the conditions in the North Carolina mountains. He wrote, “The majority of the preachers are as unread as the people themselves, unread in history and frequently unread in the Scriptures. The average preacher could not pass an examination for entrance into the sixth grade of a city school. Not one in three owns a Bible dictionary or concordance. They receive the Bible as the ipsissima verba of revelation. An appeal to it is the end of controversy—the end in one sense and the beginning in another.”

Regarding his time while pastor at Dillingham Presbyterian Church, it has been written of him, “Rev. Davis is said to have been directly responsible for the enactment of a law prohibiting the manufacture and sale of whiskey within two miles of any church in Buncombe County. He personally went to Raleigh with the petition and remained until the bill was passed by the legislature. This law, however, only affected government licensed distilleries. There still remained a number of illegal moonshine operations in the coves of more remote sections of Big Ivy.” (Dillingham’s of Big Ivy, Buncombe, and Related Families. Margaret Haile, Gateway Press, 1985)

Likewise, synod minutes note, “Brother Davis has won a great victory in his field by his valiant labors resulting in the passage of a prohibition bills covering all territory in Buncombe, Madison, and Yancey counties, except incorporated towns. We cannot over estimate what this means in the advancement of the cause of Christ in that section.” (Minutes of the Eighty-Eight Annual Session of the Synod of North Carolina, Held and Charlotte N.C., October, 1901. pg. 422-423)

The Asheville-Citizen Times recorded, “REV. E. MAC. DAVIS TO CARRY PETITIONS AND LETTERS TO RALEIGH. Editor The Citizen: The people of Ivy township are thoroughly aroused against the distillery operated and the distillery proposed to be operated between Democrat and Barnardsvllle on Big Ivy creek.” (Asheville Citizen-Times, Monday, February 11, 1901, pg. 3.)

The Charlotte news later recorded, “Until the late Rev. E. Mack Davis began preaching there about 12 years ago, the gospel was seldom heard in that section. Mr. Davis was an honored member of this Synod and did a most effective work. Moonshiners warned him that if he did not cease preaching he would be killed. He did not heed the warning, hut continued to preach. He went at once to Asheville and his life insured for ten thousand dollars, with the provision that if he should be killed the money should be used in erecting ten new church buildings in the part of the state where he was preaching. He was not killed, but his horse was cruelly treated and his hair was clipped so close as to cause the animal to resemble a mule as much as possible. Mr. Davis turned this misfortune of the horse to good account, however, he had photographs of him taken and sold enough of them to build a new church.” (The Charlotte News, Thursday, October 7, 1910, p. 7.)

Finally his deeds were recalled and recorded in the Presbyterian Standard upon his death in 1905: “In a county that had been celebrated for its number of murders, he did not hesitate to threaten the illicit distillers with detection and arrest, and on more than one occasion he led the revenue officers to the stills and helped in breaking up those sources of demoralization. It is probable that his very boldness saved his life, — that and his unfailing humor. When some of his enemies shaved his horse’s tail and mane Mr. Davis rode Jumbo to Asheville, had a photograph taken of the disfigured steed, and sold enough of them to contribute very largely to the building of a new church, upon the completion of which he publicly thanked the perpetrators of the joke.” (The Presbyterian Standard, January 4, 1905 Vol. XLVII -No. 1)

Edit: 5/26/2017 – I’ve confirmed with Marilyn Dean Mitchem, an expert on the “Christy” series that the story of E. Mac Davis and his horse is the basis for chapter 24 of the book Christy and the corresponding TV episode “A Closer Walk.” 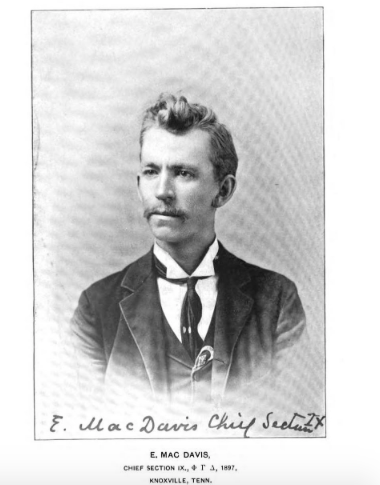