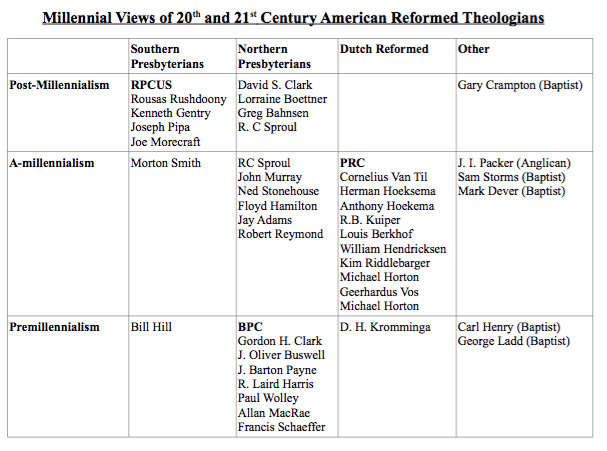 I put together this handy chart to see where various 20th and 21st century Reformed theologians stand on the question of the millennium. I chose theologians whom I’m particularly familiar with, rather than choosing the strongest or most popular advocate of the respective positions.
There are some interesting things to notice. Southern Presbyterians tend to be postmillenialists, while Northern Presbyterians are somewhat evenly split among post-, a-, and pre-millennial positions. There is, however, at least one representative of premillennialism (Bill Hill, the founder of PEF) and one of amillennialism (Morton Smith, a founder of Greenville Seminary) among the Southern Presbyterian theologians I’m familiar with.
While Presbyterians are fairly divided on the question of the millennium, the Dutch Reformed have historically been almost exclusively amillennialists. I was able to find only one Dutch Reformed advocate of premillennialism (D. H Kromminga of the CRC) and was unable to find any Dutch Reformed advocate of postmillennialism.
Though other groups, like Baptists and Anglicans, are not really Reformed, it is interesting to see their positions on this topic. Like the Dutch Reformed, these groups have little diversity of belief on the question of the millennium. Baptist are probably 90% or more likely to be premillennialists, but examples of amillennialism and postmillennialism are not unknown. Anglican, like Lutherans and Catholics are, I believe, largely amillenialists.
While “counting noses” is not a good method of doing theology, trends can help one understand the history of doctrines. Basically, amillennialism has long been the majority position – not only in Anglican, Lutheran, and Catholic traditions, but also (so I’ve read) in Reformed churches. Whether this extends to historic Presbyterianism (which has streaks of postmillennialism) I’m not able to comment at present. Part of the problem with discussing historic Presbyterianism on this question is that there is a debate over some theologians of the 19th century (for example) as to which position they held. The Princeton theologians are claimed by both postmillennialists and amillennialists, it seems.
Unrelated to this survey, let me say that I’ve long noticed trends in the personality and confidence of adherents of the various millennial positions. Postmillennailsts, frankly, tend to be jerks. Amillennialists tend to be too quiet about their position as if they were less than sure about it. And premillenialists tend to be more emotional than logical. There are exceptions to each of these observations.
As for my own position, the amount I’ve studied on this topic just doesn’t do justice to the question. Let me just say there is one position of the three that seems impossible to me, another that seems doubtful, and a third that seems more likely than not.

5 thoughts on “A Brief Survey of Reformed Eschatology”