Philosopher, theologian, professor, intellectual, Dr. Gordon H. Clark who teaches at Covenant College doesn’t appear to have lost much as he approaches his 81st year.

He may lose a few students when he says “philosophy of life” is a ridiculous concept in evaluating one’s concept of life and its intrinsic requirements – and then he says he is a “pre-suppositionalist.” But then, you also think he cares, and he will get his point across.

The professor, who for 28 years headed the department of philosophy at Butler University in Indiana, came to Covenant in 1974, and now teaches philosophy at the college. Additionally, he is a “systematic theology” professor at Sangre de Cristo Seminary in Colorado, teaching there in the summer.

Dr. Clark, widowed and the grandfather of nine, enjoys chess and painting. Well, chess, anyway. The painting is done with oils, and he “attacks the canvas” with the vigor of a love-hate relationship.

“Tell the public that I find the oil painting the most irritating activity I can think (of),” he says, humorously confessing some degree of masochism. He likened the pasttime to self-flagellation by a “medieval monk.”

And when he plays chess, it is with “brilliant colleague, Covenant physics professor Dr. Jamieson Keister. The methodology of play, however, may appear a bit unique.

That is because the two academicians play the game by phone! Why? Because Dr. Clark, living on the bluff on Lookout Mountain, does not like driving in fog. Some games, which are played between the two gentlemen beginning at 8 p.m. on Saturdays, have been known to last four hours, according to Dr. Clark.

Without casting aspersions on Dr. Keister, who he describe as “exceedingly brilliant,” he said the physics professor is “better” at teaching than at chess.

Though he has lived many years, Dr. Clark seeks neither retirement nor dotage. In fact, the author of at least 25 books and a number of articles, continues to write.

Among his works are: Thales to Dewey (a history of philosophy); Behaviorism and Christianity; Hellenistic Philosophy; Historiography: Secular and Religious; Philosophy of Science and Belief in God; Religion, Reason, and Revelation; and Biblical Predestination.

Educated at a “manual training high school” in Philadelphia, where he was born, he studied French, Greek, and Latin. “That wasn’t so remarkable in those days,” he said.

Later, he would receive bachelor and doctoral degrees from the University of Pennsylvania, and ultimately, a D.D. degree from Philadelphia’s Reformed Episcopal Seminary. He is an ordained minister (whose father and grandfather were also ministers), and is a Presbyterian.

In his university pursuits he also studied German and Hebrew, and his education includes a stint at the Sorbonne in Paris; he is the recipient of medals from the Alliance Francais.

Says Dr. Clark, “I don’t use the Latin and Hebrew very much, but I use the French and Greek every day, and some German, too.”

Speaking from the point of view of an educator, Dr. Clark quietly, but firmly, decries public education. “My remark is that public education is a disaster … I find that the college students who come from public schools (are not as well prepared). Those from Christian high schools are much superior.

Dr. Clark was asked in effect if he had reservations about raising the hackles of those in public education. He said, “I’d be delighted to raise their ire.” But he did not say it with identifiable malice.

As a philosopher, minister, and professor, he prefers to think of himself as a “Calvinist.” Stating he believes in the divinity of Jesus Christ, and the existence of the Trinity, he feels that the term “fundamentalism” is either too restrictive or not wholly applicable.

He said of his life philosophy, “presuppositionalism,” that “it is a type of philosophy … it is similar to geometry in that there are axioms and theorems.”

“It is the opposite of empiricism. It opposes the sensory experiences … deduces axioms … intellectual.”

If this definition is a bit mind-boggling, one may wish to call the good professor, who also made what would appear a rather interesting observation about physics: “The laws of physics – don’t say the laws of nature – are determined by aesthetic considerations relative to chosen mathematical procedures by which observational materials fitted into the differential equation … the laws of physics are wrong. They keep changing.”

Critiquing the Bible, he said he thought the American Standard Version was the best translation available, and that the King James Version was in second place, but had been unfairly “maligned.”

He was asked who he thought was the greatest philosopher who ever lived. Without hesitation he proclaimed that it was Plato, and said, “Of course, Aristotle was very great, too.”

When asked about Jesus’ role as a philosopher, he said Christ was not a philosopher. Why not? Because he didn’t write, said Dr. Clark.

Members of the secular intelligentsia might well enjoy matching wits with the irrepressible Dr. Clark. If you’re not in that group, merely let him go and say – “he’s sharp as a tack!” 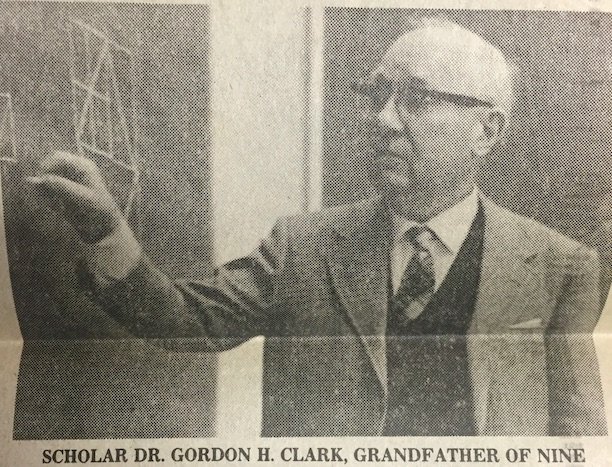 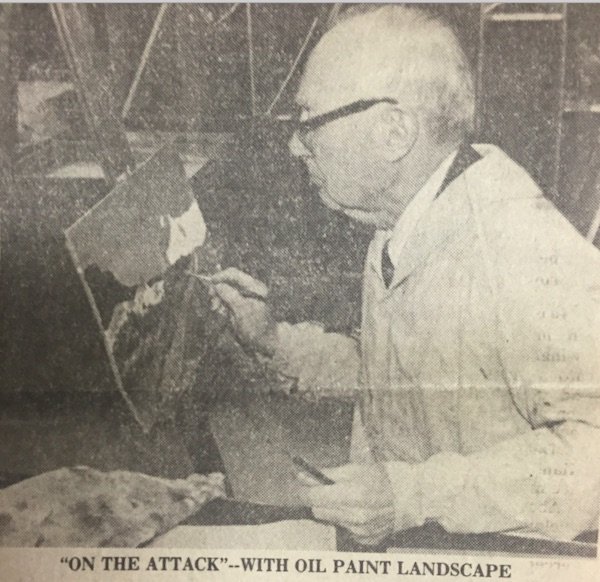