Wayne Sparkman, the archivist at the PCA archives, once warned me that if I didn’t note a document when I found it, I’d likely not find it again. I was fearful that he was correct regarding this document I was looking for about the “Wheaton Lectures.”
The Wheaton Lectures, three of them, became the material for my favorite of Dr. Clark’s books titled “An Introduction to Christian Philosophy.”
This document shows that the lectures were held in Edman chapel, ironically the chapel named after the Wheaton College president who forced Clark to resign in 1943.
Another point of note – the lectures occurred in 1965, not 1966 as claimed by John Robbins in the foreword of “An Introduction to Christian Philosophy.” I actually think in another place someone wrote that these lectures occurred in 1963! Well, maybe this document settles the question. 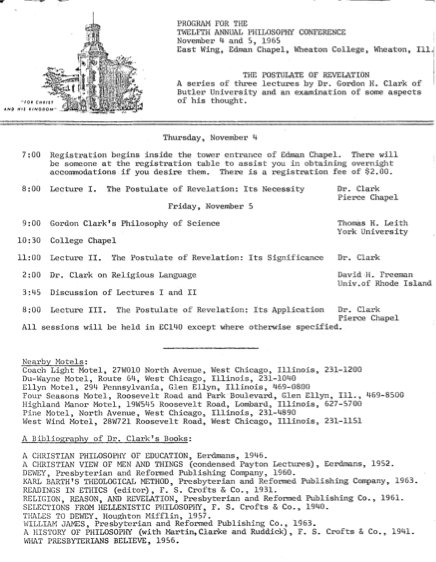